Floor of Abdominopelvic Cavity
The outlet of the pelvis (inferior aperture of the pelvis) is, for the most part, closed by the slinglike structure known as the pelvic diaphragm that, together with the urogenital diaphragm, gives the inferior and posteroinferior support to the abdominopelvic viscera. As usually described, the pelvic diaphragm consists of the right and left levatorani muscles, the right and left coccygeus muscles, and the fascia on both surfaces of these muscles.


The levatorani muscle arises (1) from the pelvic surface of the pubis along a line from a little lateral to the inferior part of the pubic symphysis toward the obturator foramen, (2) from the tendinous arch of the levatorani, which is a thickening of the fascia on the pelvic surface of the obturator internus muscle along a line extending from the lateral end of the pubic origin of the levatorani to the ischial spine, and (3) from the pelvic surface of the ischial spine. In general, the fibers of the right and left levatorani muscles run posteriorly, inferiorly, and medially, with varying degrees of obliquity, to come into relationship with each other in the midline by inserting into the perineal body, as well as the anterior and lateral sides of the coccyx, or to blend closely with the midline viscera, interposed between the two muscles. The levatorani can be described in at least three parts: (1) The puborectalis muscle, has fibers inserting into the perineal body, clasping the prostate in the male and the vagina in the female. The remaining fibers form a sling around the anorectal junction. (2) The intermediate set of fibers, found lateral and slightly superior to the puborectalis, form the pubococcygeus muscle. It originates from the posterior aspect of the pubic bone and the tendinous arch of the levator ani to insert into the coccyx and anococcygeal ligament. (3) The remainder of the levator ani muscle is the iliococcygeus muscle, which originates from the tendinous arch of the levator ani and inserts onto the lateral aspect of the coccyx. The nerve supply of the levator ani muscle is from the fourth sacral nerve by way of the perineal branch of the pudendal nerve. 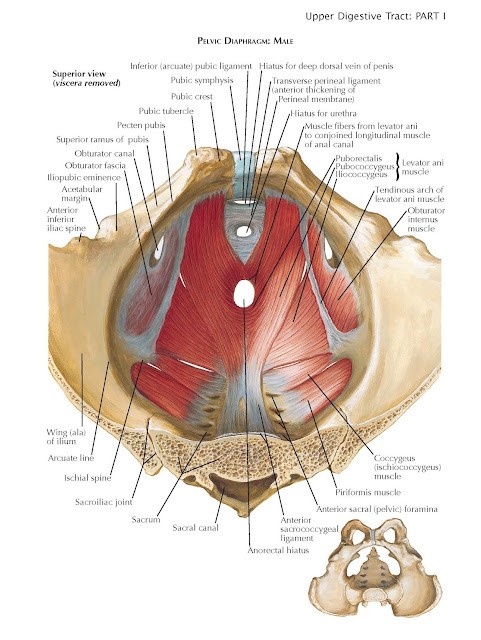 The coccygeus muscle, which is closely applied to the deep surface of the sacrospinous ligament and is in much the same plane as the iliococcygeus muscle, is a flat triangular muscle arising from the ischial spine and inserting into the margin of the lower two sacral segments and the first two segments of the coccyx. It receives its nerve supply from the anterior primary ramus of the fourth sacral nerve.
The bony framework of the true pelvis (pelvis minor), supplemented by the sacrospinous and sacrotuberous ligaments, presents several openings, each of which is, to a great extent, closed by muscle. The obturator internus, a muscle of the lower extremity, covers the obturator foramen except for the much smaller obturator canal through which the obturator vessels and nerve pass. It arises from the pelvic aspect of the obturator fascia and the adjacent bone and passes through the lesser sciatic foramen (mostly filling this opening) on its way to the medial side of the greater trochanter of the femur, where it inserts. Anterosuperior to the origin of the levator ani muscle, the obturator internus muscle forms a portion of the wall of the pelvic cavity. The piriformis, also a muscle of the lower extremity, arises from the pelvic surface of the sacrum between, and lateral to, the second, third, and fourth anterior sacral foramina and mostly fills the greater sciatic foramen in traversing this foramen on its way to insert on the summit of the greater trochanter of the femur.