Diaphragm
The dome-shaped roof of the abdominopelvic cavity is formed by a musculoaponeurotic septum, the diaphragm, which also forms the floor of the thoracic cavity and thus is the partition between these two cavities. This unique muscular structure takes origin by its entire circumference from the inner aspect of the lower margin of the thoracic cage. The muscular fibers course superiorly and inward to insert in the margins of the diaphragm’s central tendon. The sternal origin is, by way of a fairly short, fleshy slip (a right and a left one), on the posterior aspect of the xiphoid process, which, on its way to the anterior margin of the central tendon, does not ascend nearly as much as do the fibers from the other two areas of origin. In fact, depending on the position of the individual and the degree of contraction of the diaphragm, the fibers from the sternal origin may even course inferiorly.


The costal origin in general arises from the inner surfaces of the costal cartilages and the adjacent parts of the lower six ribs by fibers from each that interdigitate with the origin of the transversus abdominis muscle. The lumbar origin consists of a crus and a medial arcuate ligament and a lateral arcuate ligament on each side. The crura begin as tendinous structures, which attach to the anterior and lateral sides of the upper lumbar vertebrae (one to three or four for the right and one to two or three for the left) and related intervertebral disks, blending with the anterior longitudinal ligament. The right crus is stouter as well as longer than the left and, as it becomes muscular, usually splits to send a portion to the left of the esophageal hiatus. The medial margins of the two crura converge to meet in the midline to form an arch across the anterior aspect of the aorta, the median arcuate ligament. The medial arcuate ligament is a tendinous arch that appears as a thickening in the fascia over the superior part of the psoas major muscle, extending from the side of the body of the second (or first) lumbar vertebra, where it blends with the lateral margin of the corresponding crus to the end of the transverse process of the first (or second) lumbar vertebra. The lateral arcuate ligament is a thickening in the fascia that covers the quadratus lumborum muscle and reaches from the end of the transverse process of the 1st (or 2nd) lumbar vertebra to the tip and lower margin of the 12th (or 11th) rib. 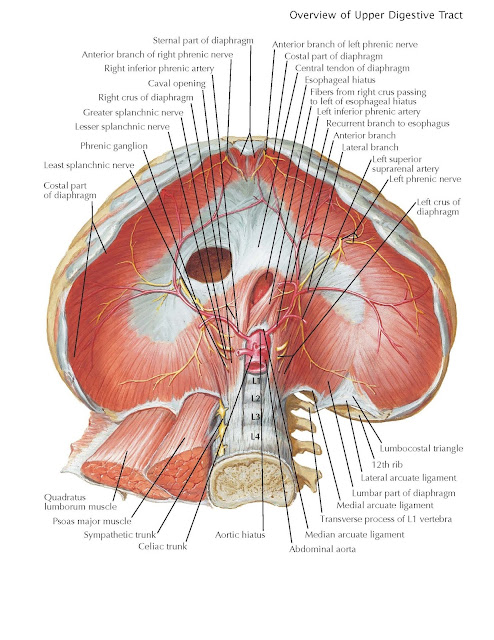 The central tendon is a thin but strong and dense aponeurosis, closer to the sternal origin than the costal and lumbar origins. It is shaped somewhat like a thick and widely opened V, with slight indentations, which produce three leaflets. The fibrous pericardium is blended with its superior surface.
Several openings (hiatuses) permit the passage of structures between the thoracic and abdominal cavities.
The inferior vena cava passes through the caval opening at the junction of the right and middle leaflets of the central tendon in the most anterior and highest of the three large openings, being at the level of the disc between T8 and T9. It often transmits a branch of the phrenic nerve. The esophageal hiatus is in the muscular portion of the diaphragm just posterior to the central tendon, a little to the left of the midline and about at the level of T10, and transmits the esophagus as well as the anterior and posterior vagal trunks to the abdomen.
The aortic hiatus (really a notch in the posterior margin of the diaphragm) is at the level of T12 and transmits the thoracic duct and azygos vein in addition to the aorta.  The  greater and lesser splanchnic nerves pierce the crura, and, in addition, the left crus is pierced by the hemiazygos vein.
Intervals at the origin where muscle is replaced by areolar connective tissue occur at the sternocostal tri-angle and, with great variation, at the lateral arcuate ligaments.