Posterior Wall of Abdominal Cavity
The bodies of the five lumbar vertebrae, together with the related intervertebral discs, form a distinct, longitudinal, midline elevation in the posterior wall of the abdominal cavity, which may actually come within a relatively short distance (a few centimeters) of the inner surface of the anterior abdominal wall. The intervertebral disks produce bulges in this elevation, and the anterior longitudinal ligament, with the closely attached crura of the diaphragm, covers its anterior surface. Just lateral to the lumbar vertebrae are the psoas major and minor muscles (if present). Lateral to the psoas major muscle in the area inferior to the crest of the ilium is the iliacus muscle, and in the area between the 12th rib and the crest of the ilium is the quadratus lumborum muscle.


The psoas major muscle arises from (1) the anterior surfaces of the bases and the inferior borders of the transverse processes of all of the lumbar vertebrae; (2) the lateral aspect of the intervertebral disc above each of the lumbar vertebrae and from the adjacent parts of the vertebra above and the vertebra below each of these discs; and (3) from tendinous arches stretching across the concavity at the side of the body of each of the first four lumbar vertebrae. This muscle courses interiorly along the brim of the pelvis and passes inferior to the inguinal ligament to enter the thigh and insert on the lesser trochanter of the femur. 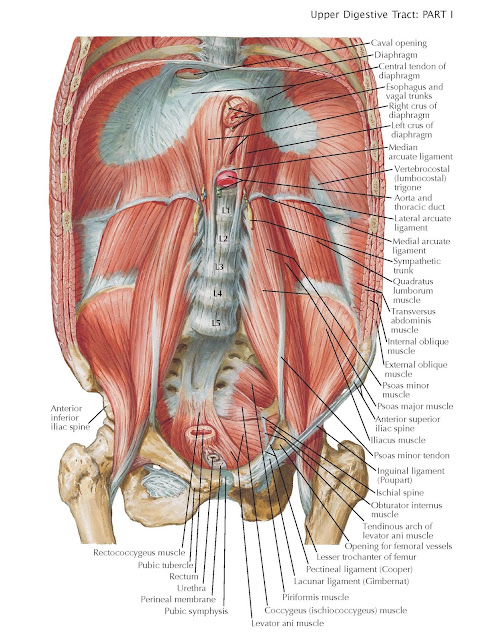 Present in 40% to 60% of the cases, the psoas minor muscle arises from the lateral aspect of the bodies of the 12th thoracic and 1st lumbar vertebrae and the intervertebral disc between them. It courses inferiorly on the anterior aspect of the psoas major, ending in a long flat tendon that inserts into the pecten pubis and the iliopectineal eminence.
The iliacus muscle fills much of the iliac fossa (which actually forms the lateral wall of this part of the abdominopelvic cavity) and arises from the upper two thirds of this fossa, the inner lip of the crest of the ilium, the anterior sacroiliac and iliolumbar ligaments, and the base of the sacrum. Its fibers converge as they course inferiorly to insert, for the most part, into the lateral side of the tendon of the psoas major muscle. Some of the fibers also insert onto the femur just inferior and anterior to the lesser trochanter. Because most of the iliacus muscle inserts into the tendon of the psoas major, the two muscles are often described as the iliopsoas muscle and, of course, have a common action.

The quadratus lumborum muscle arises from the posterior part of the iliac crest (inner lip), the iliolumbar ligament, and the transverse process of the 5th lumbar vertebra (and perhaps 4th, 3rd, and 2nd lumbar vertebrae for a sometimes-demonstrable anterior layer of the muscle), and inserts into the lower border of the medial part (half or so) of the 12th rib, with some insertion into the transverse processes of the upper four lumbar vertebrae. It draws the last rib inferiorly and thus acts as anchorage for the diaphragm to the crest of the ilium, and it also bends the lumbar portion of the lumbar spine laterally. Its anterior surface is covered by a variably thin, anterior layer of the thoracolumbar fascia. Its posterior side is in contact with the thoracolumbar fascia’s middle layer.
The posteroinferior part of the diaphragm may be considered as part of the posterior abdominal wall.
Depending on where the posterior limit of the anterolateral abdominal wall is arbitrarily located, the portions of the transversus abdominis muscle (overlain by the internal and external oblique muscles) just lateral to the quadratus lumborum muscle can also be considered as helping to form the posterior abdominal wall.
The superficial structures of the lower part of the back are, of course, external to what has been described here and would have to be traverse were the abdominal cavity approached from behind.