Haemodynamics
Relationships between pressurresistance and f﻿low
Haemodynamics is the study of the relationships between pressure, resistance and the flow of blood in the cardiovascular system. Although the properties of this flow are enormously complex, they can largely be derived from simpler physical laws governing the flow of liquids through single tubes.


When a fluid is pumped through a closed system, its flow (Q) is determined by the pressure head developed by the pump (P1–P2 or ΔP), and by the resistance (R) to that flow, according to Darcy’s law (analogous to Ohm’s law):
Q = P/R or for the cardiovascular system as a whole: CO = (MABP - CVP)/TPR,
where CO is cardiac output, MABP is mean arterial blood pressure, TPR is total peripheral resistance and CVP is central venous pressure. Because CVP is ordinarily close to zero, MABP is equal to CO × TPR.
Resistance to flow is caused by frictional forces within the fluid, and depends on the viscosity of the fluid and the dimensions of the tube, as described by Poiseuille’s law:
resistance = 8VL /πr 4 so that: flow =∆P(πr 4 /8VL).
Here, V is the viscosity of the fluid, L is the tube length and r is the inner radius (= 1/2 the diameter) of the tube. Because flow depends on the 4th power of the tube radius in this equation, small changes in radius have a powerful effect on flow. For example, a 20% decrease in radius reduces flow by about 60%.
Considering the cardiovascular system as a whole, the different types or sizes of blood vessels (e.g. arteries, arterioles, capillaries) are arranged sequentially, or in series. In this case, the resistance of the entire system is equal to the sum of all the resistances offered by each type of vessel:
Rtotal = Rarteries + Rarterioles + Rcapillaries + Rvenules + Rveins.
Calculations taking into account the estimated lengths, radii and numbers of the various sizes of blood vessels show that the arterioles, and to a lesser extent the capillaries and venules, are primarily responsible for the resistance of the cardiovascular system to the flow of blood. In other words, Rarteriole makes the largest contribution to Rtotal. Because according to Darcy’s law the pressure drop in any section of the system is proportional to the resistance of that section, the steepest fall in pressure is in the arterioles (Figure 18.2).
Although the various sizes of blood vessel are arranged in series, each organ or region of the body is supplied by its own major arteries which emerge from the aorta. The vascular beds for the various organs are therefore arranged in parallel with each other. Similarly, the vascular beds within each organ are mainly arranged into parallel subdivisions (e.g. the arteriolar resistances Rarteriole are in parallel with each other). For ‘n’ vascular beds arranged in parallel:
1/Rtotal = 1/R1 + 1/R2 + 1/R3 + 1/R4 …1/Rn.
An important consequence of this relationship is that the blood flow to a particular organ can be altered (by adjustments of the resistances of the arterioles in that organ) without greatly affecting pressures and flows in the rest of the system. This can be accomplished, as a consequence of Poiseuille’s law, by relatively small dilatations or constrictions of the arterioles within an organ or vascular bed.
Because there are so many small blood vessels (e.g. millions of arterioles, billions of venules, trillions of capillaries), the overall cross-sectional area of the vasculature reaches its peak in the microcirculation. As the velocity of the blood at any level in the system is equal to the total flow (the cardiac output) divided by the cross-sectional area at that level, the blood flow is slowest in the capillaries (Figure 18.2), favouring O2–CO2 exchange and tissue absorption of nutrients. The capillary transit time at rest is 0.5–2 s. 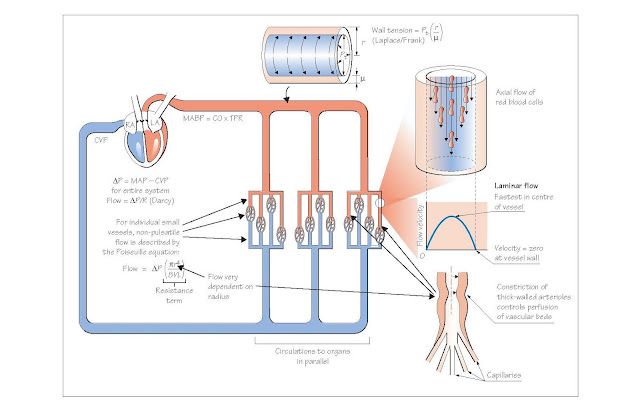 Blood viscosity
Very viscous fluids like motor oil flow more slowly than less viscous fluids like water. Viscosity is caused by frictional forces within a fluid that resist flow. Although the viscosity of plasma is similar to that of water, the viscosity of blood is normally three to four times that of water, because of the presence of blood cells, mainly erythrocytes. In anaemia, where the cell concentration (haematocrit) is low, viscosity and therefore vascular resistance decrease, and CO rises. Conversely, in the high-haematocrit condi- tion polycythaemia, vascular resistance and blood pressure are increased.

Laminar F﻿Low
As liquid flows steadily through a long tube, frictional forces are exerted by the tube wall. These, in addition to viscous forces within the liquid, set up a velocity gradient across the tube (Figure 18.1) in which the fluid adjacent to the wall is motionless, and the flow velocity is greatest at the centre of the tube. This is termed laminar flow, and occurs in the microcirculation, except in the smallest capillaries. One consequence of laminar flow is that erythrocytes tend to move away from the vessel wall and align themselves edgewise in the flow stream. This reduces the effective viscosity of the blood in the microcirculation (the Fåhraeus–Lindqvist effect), helping to minimize resistance. 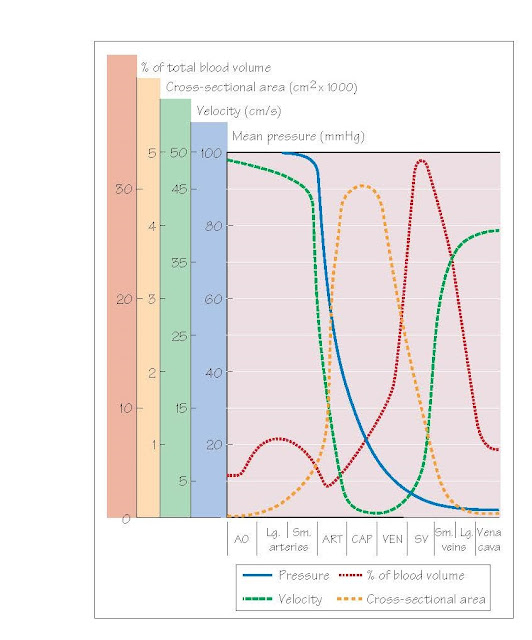 Wall tension
In addition to the pressure gradient along the length of blood vessels, there exists a pressure difference across the wall of a blood vessel. This transmural pressure is equal to the pressure inside the vessel minus the interstitial pressure. The transmural pressure exerts a circumferential tension on the wall of the blood vessel that tends to distend it, much as high pressure within a balloon stretches it. According to the Laplace/Frank law:
wall tension = Pt (r /π),
where Pt is the transmural pressure, r is the vessel radius and μ is the wall thickness. In the aorta, where Pt and r are high, athero- sclerosis may cause thinning of the arterial wall and the development of a bulge or aneurysm (see Chapter 37). This increases r and decreases  μ,  setting  up  a  vicious  cycle  of  increasing  wall tension reated, may result in vessel rupture.