Blood Pressure And F﻿Low In The Arteries And Arterioles


Blood Pressure And F﻿Low In The Arteries And Arterioles
Factors controlling arterial blood pressure The mean arterial blood pressure is equal to the product of the cardiac output (about 5 L/min at rest) and the total peripheral resistance (TPR). Because the total drop of mean pressure across the systemic circulation is about 100 mmHg, TPR is calculated to be 100 mmHg/5000 mL/min, or 0.02 mmHg/mL/min. The unit mmHg/mL/min is referred to as a peripheral resistance unit (PRU), so that TPR is normally about 0.02 PRU.


Systolic pressure is mainly influenced by the stroke volume, the left ventricular ejection velocity and aortic/arterial stiffness, and rises when any of these increase. Conversely, diastolic pressure rises with an increase in TPR. Arterial pressure falls progressively during diastole (see Figure 16), so that a shortening of the diastolic interval associated with a rise in the heart rate also increases diastolic pressure. 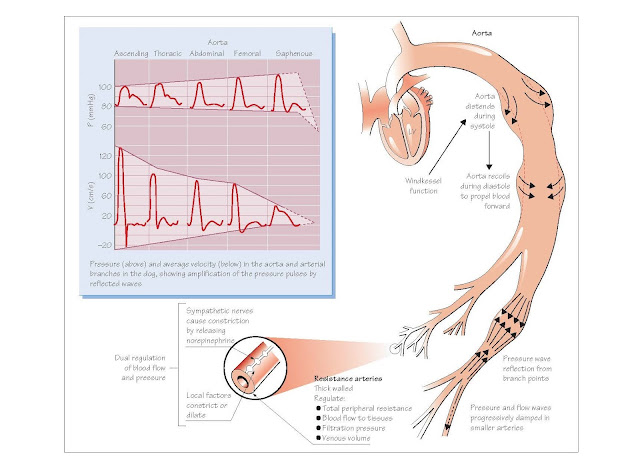 Blood pressure and f﻿low in the arteries
The blood flow in the aorta and the larger arteries is pulsatile, as a result of the rhythmic emptying of the left ventricle.
As blood is ejected from the left ventricle during systole, it hits the column of blood already present in the ascending aorta, creating a pressure wave in the aortic blood which is rapidly (at between 4 and 10 m/s) conducted towards the arterioles. As this pulse pressure wave passes each point along the aorta and the major arteries, it sets up a transient pressure gradient that briefly propels the blood at that point forward, causing a pulsatile flow wave. The blood in the arteries therefore moves forward in short bursts, separated by longer periods of stasis, so that its average velocity in the aorta is about 0.2 m/s.
The pressure wave also causes the elastic arterial wall to bulge out, thereby storing some of the energy of the wave. The arterial wall then rebounds, releasing part of this energy to drive the blood forward during diastole (diastolic run-off). This pumping mechanism of the elastic arteries is termed the Windkessel function (Figure 19).
The large arteries also absorb and dissipate some of the energy of the pressure wave. This progressively damps the oscillations in flow, as shown by the lower traces in the inset to Figure 19. However, as the upper traces illustrate, the pulse pressure wave becomes somewhat larger as it moves down the aorta and major arteries (e.g. the saphenous artery), before it then progressively dies out along the smaller arteries. This occurs in part because a fraction of the pressure wave is reflected back towards the heart at arterial branch points. In the aorta and large arteries, the reflected wave summates with the forward-moving pulse pressure wave, increasing its amplitude. Once the blood has entered the smaller arteries, however, the damping properties of the arterial wall pre- dominate, and progressively depress the oscillations in flow and pressure, so that these die out completely by the time the blood reaches the microcirculation.

Arterioles and vascular resistance
The mean blood pressure falls progressively along the arterial system. The decline is particularly steep in the smallest arteries and the arterioles (diameter <100 µm), because these vessels present the greatest resistance to flow (Figure 18.2). The walls of the arterioles are very thick in relation to the diameter of the lumen, and these vessels can therefore constrict powerfully, dramatically increasing this resistance. Because the arterioles are normally partially constricted, their resistance can also be decreased by vasodilating stimuli.
The role of the arterioles in setting the vascular resistance has several important implications.
·       Constriction or dilatation of all, or a large proportion, of the arterioles in the body will affect the TPR and the blood pressure.
·       Constriction of the arterioles in one organ or region will selectively direct the flow of blood away from that region, while dilatation will have the opposite effect.
·   Changes in arteriolar resistance in a region affect the ‘down- stream’ hydrostatic pressure within the capillary beds and veins in that region. Changes in the pressure within the capillaries affect the movement of fluid from the blood to the tissues (see Chapter 21). Because the veins are very compliant, their volume is very sensitive to alterations in pressure (see Chapter 22). Thus, arteriolar constriction in a region of the body will both promote the movement of fluid from its tissue spaces into its exchange vessels, and also decrease its venous volume. Both effects work to increase the blood supply to other parts of the body.
Table 19.1 lists important endogenous substances and factors that affect arteriolar tone. 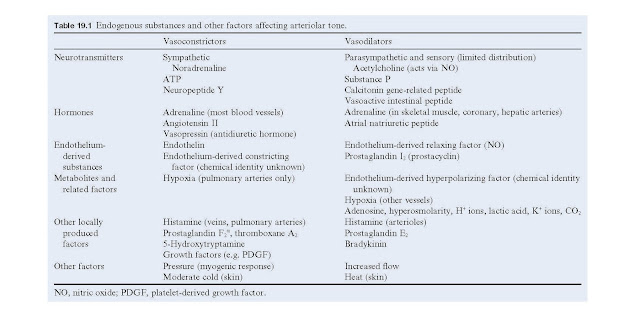