The Microcirculation And Lymphatic System, And Diapedesis


The Microcirculation And Lymphatic System, And Diapedesis
The microcirculation comprises the smallest arterioles, and the exchange vessels, including the capillaries and the postcapillary venules. The transfer of gases, water, nutrients, waste materials and other substances between the blood and body tissues carried out by the exchange vessels is the ultimate function of the cardiovascular system. 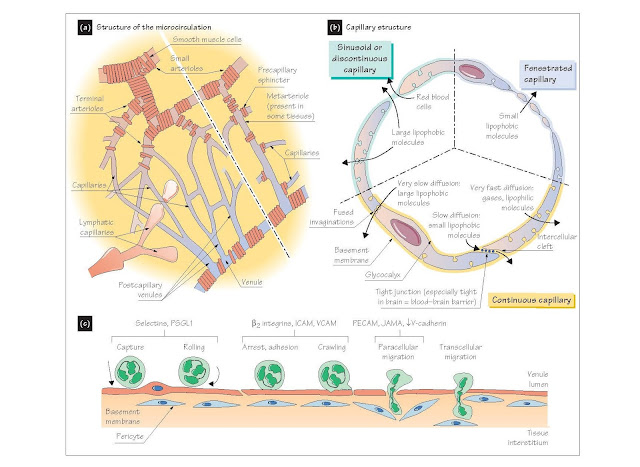 capillary wall
Water, gases and solutes (e.g. electrolytes, glucose, proteins) cross the walls of exchange vessels mainly by diffusion, a passive process by which substances move down their concentration gradients. O2 and CO2 can diffuse through the lipid bilayers of the endothelial cells. These and other lipophilic substances (e.g. general anaesthetics) therefore cross the capillary wall very rapidly. However, the lipid bilayer is impermeable to electrolytes and small hydrophilic (lipid-insoluble) molecules such as glucose, which therefore cross the walls of continuous capillaries (Figure 20b, bottom) 1000– 10 000 times more slowly than does O2. Hydrophilic molecules cross the capillary wall mainly by diffusing between the endothelial cells. This process is slowed by tight junctions between the endothelial cells which impede diffusion through the intercellular clefts. Diffusion is also retarded by the glycocalyx, a dense net- work of fibrous macromolecules coating the luminal side of the endothelium. This tortuous diffusion pathway (the small pore system) acts as a sieve which admits molecules of molecular weight (MW) less than 10 000.
Even large proteins (e.g. albumin, MW 69 000) can cross the capillary wall, albeit very slowly. This suggests that the capillary wall also contains a small number of large pores, although these have never been directly visualized. It has been proposed that large pores exist transiently when membrane invaginations on either side of the endothelial cell fuse, temporarily creating a channel through which large molecules diffuse.
The endothelial cells of fenestrated capillaries (found in kidneys, intestines and joints) contain pores called fenestrae (Figure 20b, upper right) which render them ∼10 times more permeable than continuous capillaries to small hydrophilic molecules, which can move through the fenestrae. Sinusoidal or discontinuous capillaries (liver, bone marrow, spleen) are very highly permeable, because they have wide spaces between adjacent endothelial cells through which proteins and even erythrocytes can pass (Figure 20b, upper left).

The blood–brain barrier
The composition of the extracellular fluid in the brain must be kept extremely constant in order to allow stable neuronal function. This is made possible by the existence of the blood–brain barrier (BBB), which tightly controls the movement of ions and solutes across the walls of the continuous capillaries within the brain and the choroid plexus. The BBB has two important features. First, the junctions between the endothelial cells of cerebral capillaries are extremely tight (resembling the zonae occludens of epithelia), preventing any significant movement of hydrophilic solutes. Second, specialized membrane transporters exist in cerebral endothelial cells which allow the controlled movement of inorganic ions, glucose, amino acids and other substances across the capillary wall. Thus, the relatively uncontrolled diffusion of solutes present in other vascular beds is replaced in the brain by a number of specific transport processes. This can present a therapeutic problem, as most drugs are excluded from the brain (e.g. many antibiotics).
The BBB is interrupted in the circumventricular organs, areas of the brain that need to be influenced by blood-borne factors, or to release substances into the blood. These include the pituitary and pineal glands, the median eminence, the area postrema and the choroid plexus. The BBB can break down with large elevations of blood pressure, osmolarity or PCO2, and in infected areas of the brain.

Diapedesis
In order to cause local inflammation in infected or damaged tissue, leucocytes must leave the blood by migrating across the endothelium of nearby venules, a process termed diapedesis (Figure 20c). Inflammatory mediators released at the site of infection induce venular endothelial cells to express E- and P-selectins and other adhesion molecules on their luminal surfaces. Leucocytes express complementary surface adhesion molecules such as VLA4 and P-selectin glycoprotein ligand 1, and many leucocytes are therefore captured as they flow by, at first rolling along the endothelial surface and then stopping as their interaction with the endothelium and exposure to locally released cytokines causes the expression and activation of additional adhesion molecules on both types of cells (e.g.VCAM1 on endothelial cells; β2 integrins on leucocytes). The leucocytes flatten and send out protrusions allowing them to creep over the endothelium, seeking ‘permissive’ sites at which they can enter the tissue by squeezing themselves through the junctions between adjacent endothelial cells (paracellular transendothelial migration). Endothelial cells aid this process by down-regulating the function of the junctional plasmalemmal protein VE-cadherin which normally acts to hold the adjacent cells close together at the junctions, and by transiently increasing the expression of junctional adhesion molecules such as PECAM and JAM-A, which the leucocytes use to pull themselves through. Alternatively, leucocytes are able to undergo transcellular transendothelial migration, a process by which they tunnel directly through rather than between endothelial cells to reach the interstitium. Following endothelial transmigration, leucocytes are able to propel themselves through weak spots in the layer of basement membrane and pericytes, gaining access to the tissue.

The lymphatic system
Approximately 8 L of fluid containing solutes and plasma proteins is filtered from the microcirculation into the tissue spaces each day. This returns to the blood via the lymphatic system. Most body tissues contain lymphatic capillaries (Figure 20a). These are blind- ended bulbous tubes 15–75 µm in diameter, with walls formed of a monolayer of endothelial cells. Interstitial fluid, plasma proteins and bacteria can easily enter the lymphatic capillaries via the gaps between these cells, the arrangement of which then prevents these substances from escaping. These vessels merge to form collecting lymphatics, the walls of which contain smooth muscle cells and one-way valves (as do the larger lymphatic vessels). The sections between these valves constrict strongly, forcing the lymph towards the blood. Lymph is also propelled by compression of the vessels by muscular contraction, body movement and tissue compression. Lymph then enters the larger afferent lymphatics, which flow into the lymph nodes. Here, foreign particles and bacteria are scavenged by phagocytes, and can initiate the production of activated lymphocytes. These enter the lymph for transport into the circulation, where they mount an immune response. Much of the lymph returns to the blood via capillary absorption in the lymph nodes. The rest enters efferent lymphatics, most of which eventually merge into the thoracic duct. This duct empties into the left subclavian vein in the neck. Lymphatics from parts of the thorax, the right arm and the right sides of the head and neck merge forming the right lymph duct, which enters the right subclavian vein. The lymphatic system is also important in the absorption of lipids from the intestines. The lacteal lymphatics are responsible for transporting about 60% of digested fat into the venous blood.