Lymphatics of Urinary System
Lower Urinary Tract
In both the bladder and ureters, lymph ﬁrst drains into a submucous network of lymph capillaries. These capillaries drain into a plexus located outside of the muscular wall. This plexus, in turn, connects to vessels that lead to regional lymph nodes. The vessels contain valves, whereas the plexus and capillaries do not. 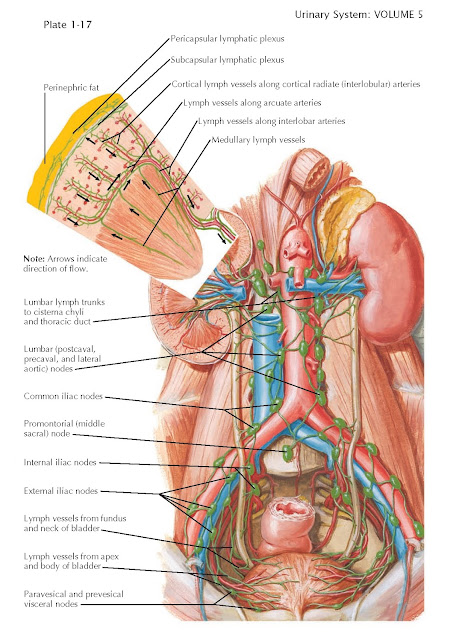 Kidney
Extrarenal. Beneath the surface of the kidney, a scanty subcapsular plexus of lymph capillaries anastomoses, by means of perforating channels, with pericapsular vessels in the perinephric fat. These vessles eventually drain into superior lumbar nodes. The subcapsular plexus also communicates sparingly with lymphatics in the deeper layers of the parenchyma.
Intrarenal. In the parenchyma, lymph capillaries accompany the blood vessels and are found chieﬂy in the perivascular connective tissue. The lymph capillaries that surround arterioles are generally larger and more numerous than those that surround venules.
The great majority of intrarenal lymphatics occur in the cortical and corticomedullary zones. In the outer cortex most lymphatics are associated with subcapsular veins and renal tubules, whereas in the midcortex they are associated with cortical radiate (interlobular) arteries and veins, glomeruli, and tubules. In the corticomedullary zone, lymphatics pass between loops of Henle and collecting ducts. In the medulla, sparse lymphatic channels drain structures in the region of the vasa recta.
The lymph vessels exiting the parenchyma reach the renal sinus, often accompanying the arteries along the way, and form some four to ﬁve trunks that exit the hilum. They are joined by lymph vessels from the renal capsule and converge into a few valve-studded renal lymphatic trunks that accompany the renal vein. These trunks primarily drain to the superior lumbar nodes.
Except as a potential metastatic pathway, renal lymphatic drainage is commonly overlooked. The volume of lymph that drains from the kidney, however, is approximately 0.5 mL/min, thus approaching that of urine. Its primary function is probably to return reabsorbed protein to the blood. Some investigators have determined that the concentration of renin is greater in renal lymph than in renal vein plasma.

Summary
The lymph drainage of the bladder and ureters passes to the external, internal, and common iliac groups of nodes a sequential chain of nodes that drains next to the lumbar (caval/aortic) nodes. The lymph of the upper ureters and kidneys drains directly into the superior lumbar nodes. In both cases, lymph from the lumbar nodes ultimately ﬂows to the thoracic duct via the lumbar lymph trunks.