Vasculature Of Ureters And Bladder


Vasculature Of Ureters And Bladder
Ureters
The blood supply of the ureters is variable and asymmetric. Indeed, any nearby arteries that are primarily retroperitoneal or subperitoneal may provide branches to the ureters.


In the abdomen, consistent ureteric branches arise from the renal arteries, which supply the ureters either directly or via a branch to the renal pelvis. Less consistent branches arise from the gonadal (testicular or ovarian) arteries, common and external iliac arteries, or aorta. These branches extend laterally to the abdominal ureter, which can thus undergo gentle medial traction during surgery.
In the pelvis, consistent ureteric branches arise from the uterine arteries in females and the inferior vesical arteries in males. Less consistent branches arise from the gonadal (testicular or ovarian), superior vesical, or internal iliac arteries. These branches extend medially to the pelvic ureter, which can thus undergo gentle lateral traction during surgery. In this region, the ureter is adherent to the posterior aspect of the serosa and thus also receives small twigs from minor peritoneal arteries.
As all of these branches reach the ureter, they divide into ascending and descending limbs that form longitudinal, anastomotic meshes on the outer ureter wall. These meshes usually establish functional collateral circulation; however, in approximately 10% to 15% of individuals, sufﬁcient collaterals do not form. Furthermore, ureteric branches are small and relatively delicate. Thus disruption of these branches may lead to ischemia. During surgical procedures, the location, disposition, and arterial supply of the ureters must be carefully evaluated.
The distribution of ureteric veins follows that of the arteries. These vessels drain to the renal vein; the inferior vena cava and its tributaries; and the endopelvic venous plexuses. 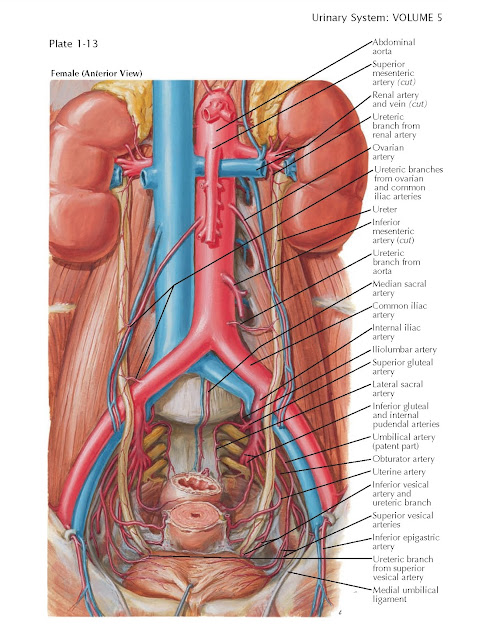