Renal Vasculature
Renal Arteries
At rest, 20% to 25% of the cardiac output circulates through the kidneys. Accordingly, the renal arteries are major paired branches of the abdominal aorta. These arteries arise from the abdominal aorta roughly at the level of the L1/L2 intervertebral disc, about 1 cm inferior to the origin of the superior mesenteric artery. 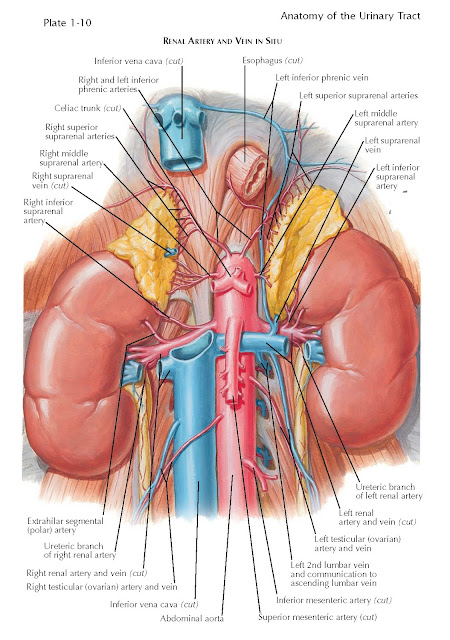 Anterior Relations. On the left, the body of the pancreas lies anterior or slightly superior to the left renal artery, with the splenic vein between them. The inferior mesenteric vein may or may not be in close relationship with the left renal vessels, depending on where it joins the splenic vein.
On the right, the duodenum and the head of the pancreas are adherent to the anterior surface of the right renal artery (see Plate 1-1 for a picture of these relationships). 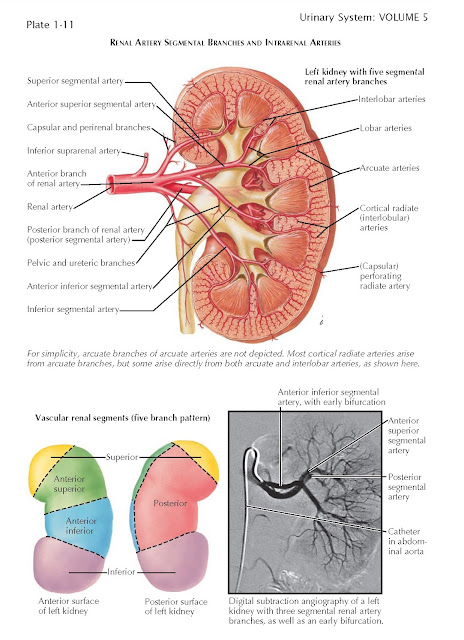 Anomalies of the Renal Artery. In about two thirds of individuals, a single renal artery passes to each kidney. In the remainder, a variety of anomalies may be seen.
Roughly 1 in 10 kidneys, for example, receives additional branches from the aorta that enter at the hilum, known as accessory or supernumerary renal arteries.
Accessory arteries are not duplicated vessels, but rather one or more segmental (end) arteries uniquely responsible for a portion of the kidney. Accessory arteries are regarded as persistent embryonic lateral splanchnic arteries. They may arise from the aorta as high as the diaphragm or as low as the internal iliac artery; however, they most frequently arise caudal to the main artery. Most occur on the left side. Right accessory arteries arising caudal to the main arter usually pass anterior to the inferior vena cava (IVC).
Up to one in four kidneys receives an extrahilar seg- mental (polar) artery that passes directly to the superior or inferior pole; half of these arise directly from the aorta, and half arise as an early (proximal or prehilar) segmental branch of the main renal artery. Accessory inferior polar arteries crossing anterior to the ureter can either cause or aggravate ureteric obstructions.
Finally, the renal arteries may give rise to branches normally derived from other vessels, such as the inferior phrenic, middle suprarenal, gonadal, pancreatic, or colic arteries, as well as one or more of the lumbar arteries. 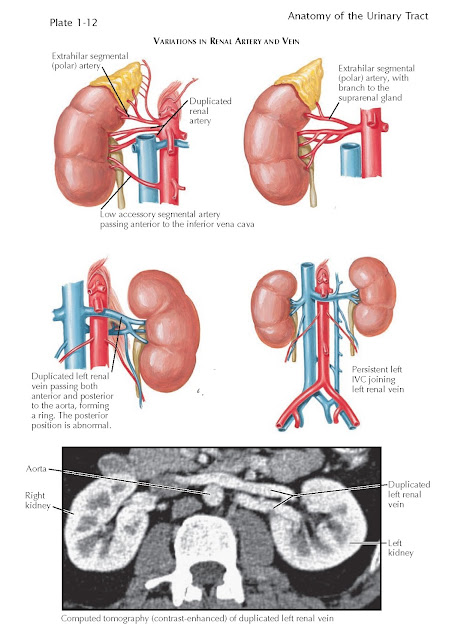 Renal Veins
The venous branches draining the renal parenchyma converge within the renal sinus and, upon leaving the hilum, unite to form the renal vein. The renal veins run anterior and slightly caudal to the renal arteries to enter the IVC.
Because the IVC lies on the right side of the vertebral column, the left renal vein is nearly three times longer than the right vein. Consequently, left kidneys are preferred as donor kidneys.
The left renal vein runs posterior to the splenic vein and body of the pancreas. It receives the left suprarenal vein and the left gonadal (testicular or ovarian) vein. It also connects with the hemiazygos vein by way of the ascending lumbar vein. It crosses the aorta anteriorly, below the origin of the superior mesenteric artery, and empties into the IVC at a level slightly superior to that of the right renal vein.
The right renal vein runs posterior to the upper second (descending) part of the duodenum and may contact the head of the pancreas. It occasionally assists in forming the azygos vein by means of a connecting branch. Unlike the left renal vein, however, the right renal vein does not receive the right gonadal or supra- renal veins, which instead connect directly to the inferior vena cava. The right renal vein joins the inferior vena cava after a very short course, usually of 2 to 2.5 cm, but sometimes 1 cm or less.
Unlike the arterial supply, the venous system is safeguarded by collaterals. These include anastomoses between renal veins, segmental veins, veins of the azygos system, inferior phrenic veins, and rarely, the splenic vein. The veins of the perinephric and paranephric fat and renal fascia connect the subcapsular intrarenal channels with veins draining the adjacent body walls.

Tributaries of the Renal Vein. Numerous small sub- capsular veins are grouped in tiny radial arrays called stellate veins (see Plate 1-19). These communicate with capsular and perinephric veins, as well as with intrarenal veins. The stellate veins empty into the cortical radiate (interlobular) veins which, in turn, drain into the arcuate veins. The arcuate veins empty into the interlobar veins following the general arterial pattern. These intrinsic renal veins have extensive collaterals.
Eventually the veins unite into four to six trunks that converge within the renal sinus, lying anterior but only in a roughly similar pattern to the segmental arteries. Approximately 1 to 2 cm medial to the hilum, these trunks join to form the renal vein.

Anomalies of the Renal Vein. Unlike in other vascular beds, anomalies of the renal veins are far less common than those of the renal arteries. The major venous anomalies include duplicated or multiple renal veins. Duplicated veins are most common on the right side, where they may pass both anterior and posterior to the renal pelvis. When present on the left side, a duplicated vein often runs posterior to the aorta, so that the aorta is encircled by two renal veins. In a rarer anomaly, a persistent left inferior vena cava may join the left renal vein.