NEUROVASCULAR RELATIONSHIPS
Brachial plexus anatomy and its relationship to the surrounding bone and muscle structure can vary. The most common anatomic relationships of the brachial plexus are shown in Plate 1-13. The brachial plexus is formed through the coalescence of the anterior rami of the C5, C6, C7, C8, and T1 spinal nerves, although variable contributions from C4 and T2 can occur. The roots combine to form trunks that, along with the subclavian artery, exit the cervical spine between the anterior scalene (scalenus anticus) and middle scalene (scalenus medius) muscles. The plexus is posterior and superior to the artery at this level owing to the inferior tilt of the first rib. The peripheral nerves of the plexus supply motor and sensory nerve function to all of the scapula musculature (except the trapezius muscle, which is innervated by the spinal accessory nerve) and the rest of the upper extremity. 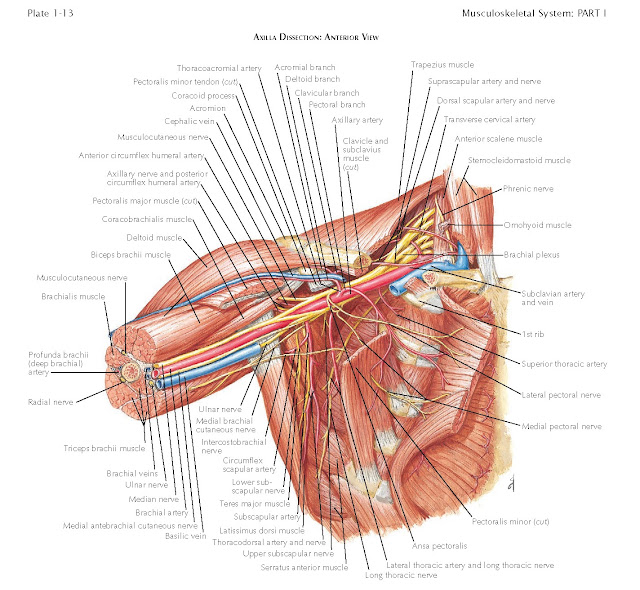 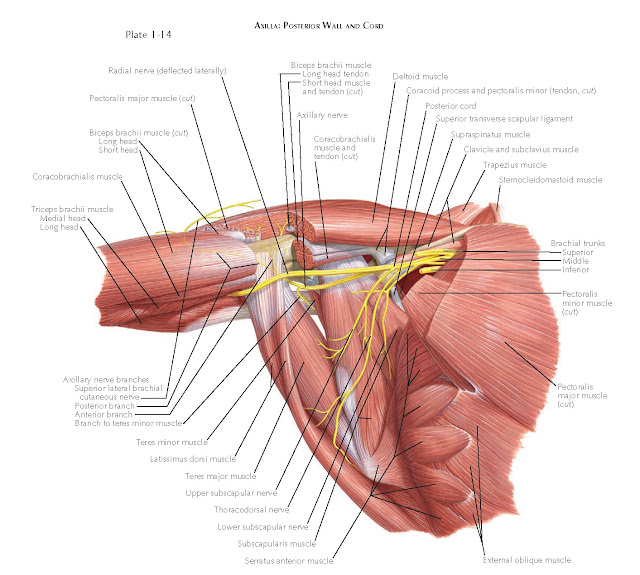 Interscalene injection of a local anesthetic is commonly performed for all surgery on the upper extremity. Dispersal of medication is minimized outside the area surrounding the nerves because the nerves become enclosed in prevertebral fascia as they pass between the scalene muscles. The brachial plexus passes through the scalene muscles over the first rib and under the clavicle and pectoralis minor before entering into the axilla. In any of these locations there can be compression of the neurovascular structures from congenital or acquired conditions, resulting in vascular or neurovascular symptoms, particularly when using the arm above shoulder level or with repetitive tasks in any arm position. These symptoms are noted in thoracic outlet syndrome.
The plexus splits into cords at or before it passes below the clavicle. The cords are named according to their position relative to the axillary artery: lateral, posterior, and medial. Upon formation of the terminal branches, the median, ulnar, and radial nerves continue with the artery into the arm. Injury or entrapment of these peripheral nerves can result in symptoms of sensory or motor deficits based on the innervation of the involved nerve.
Knowledge of the transition of the posterior neurovascular structures from their anterior origin is essential. The divergence of the teres minor and teres major muscles produces a long horizontal triangular opening laterally (see Plate 1-15). The triangle is bisected vertically by the long head of the triceps brachii muscle and is closed laterally by the shaft of the humerus. This forms a small triangular space medial to the long head of the triceps brachii, in which the circumflex scapular vessels curve onto the dorsum of the scapula, and a quadrangular space lateral to the triceps brachii muscle (see Plate 1-17). The latter space is bounded by the teres muscles above and below, by the triceps brachii medially, and by the humerus laterally. In the quadrangular space, the axillary nerve and posterior circumflex humeral vessels pass around the shaft of the humerus. Distally, the triangular interval (sometimes referred to as the lateral or lower triangular space), which transmits the radial nerve, is bounded by the teres major proximally, the long head of the triceps rachii medially, and the shaft of the humerus laterally. 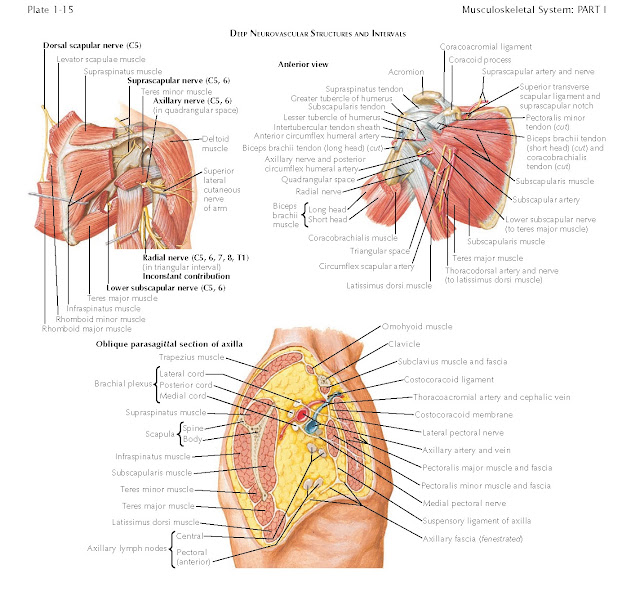 AXILLA
The axilla is a space at the junction of the upper limb, chest, and neck. It is shaped like a truncated pyramid and serves as the passageway for nerves, blood vessels, and lymphatics into or from the limb. Its walls are musculofascial. The base is the concave armpit, the actual floor being the axillary fascia. The anterior wall is composed of the two planes of pectoral muscles and the associated pectoral and clavipectoral fasciae. The lateral border of the pectoralis major muscle forms the anterior axillary fold. The posterior wall of the axilla is made up of the scapula, the scapular musculature, and the associated fasciae. The lower members of this group, together with the tendon of the latissimus dorsi muscle, form the posterior axillary fold. The chest wall, covered by the serratus anterior muscle and its fascia, forms the medial wall. The lateral wall is formed by the convergence of the tendons of the anterior and posterior axillary fold muscles onto the greater tubercular crest, the intertubercular groove, and the lesser tubercular crest of the humerus. The apex of the axilla is formed by the convergence of the bony members of the three major walls the clavicle, the scapula, and the first rib.