VASCULAR ANATOMY OF SHOULDER
The blood supply to the upper extremity is derived from the subclavian artery, which travels with the brachial plexus between the anterior and middle scalene muscles. The first important branch relevant to shoulder anatomy is the thyrocervical trunk, which gives rise to the transverse cervical and suprascapular arteries. The next branch encountered is the dorsal scapular artery, which occasionally comes off the transverse cervical artery, as opposed to the subclavian artery. 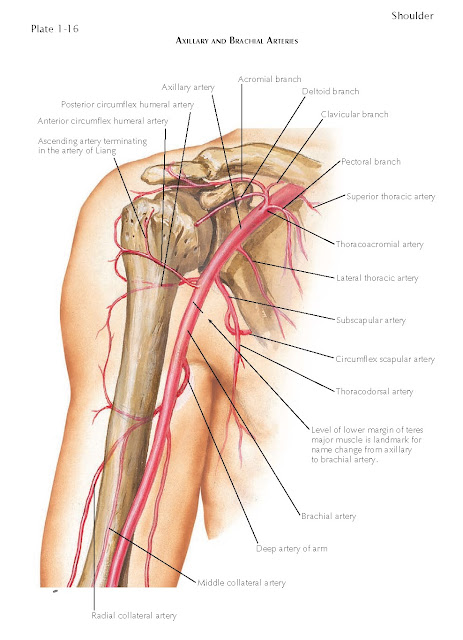 The axillary artery is the continuation of the subclavian artery beyond the lateral border of the first rib. The artery is divided into three sections based on the position of the pectoralis minor tendon. The first division is proximal to the tendon and has only one branch, the superior thoracic. It descends behind the axillary vein to the intercostal muscles of the first and second intercostal spaces and to the upper portion of the serratus anterior muscle. The second division is deep to the tendon and has two branches, the thoracoacromial artery and the lateral thoracic artery. The thoracoacromial branch gives off four branches: acromial, deltoid, pectoral, and clavicular. The acromial branch passes lateralward across the coracoid process to the acromion. It gives branches to the deltoid muscle and participates with branches of the anterior and posterior circumflex humeral and suprascapular vessels in the formation of the acromial network of small vessels on the surface of the acromion. The deltoid branch (often arising not separately but as a branch of the acromial artery) occupies the interval between the deltoid and pectoralis major muscles in company with the cephalic vein. It sends branches into these muscles. The pectoral branch is large and descends between the pectoralis major and minor muscles. It gives branches to these muscles, anastomoses with intercostal and lateral thoracic arteries, and, in the female, supplies the mammary gland in its deep aspect. The clavicular branch is a slender vessel ascending medialward to supply the subclavius muscle and the sternoclavicular joint. The lateral thoracic artery is variable. It may arise directly from the axillary artery, from the thoracoacromial artery, or from the subscapular artery; it is frequently represented by several vessels. Typically (in 65% of cases), it arises from the axillary artery, descends along the lateral border of the pectoralis minor muscle, and sends branches to the serratus anterior and pectoral muscles and axillary lymph nodes. 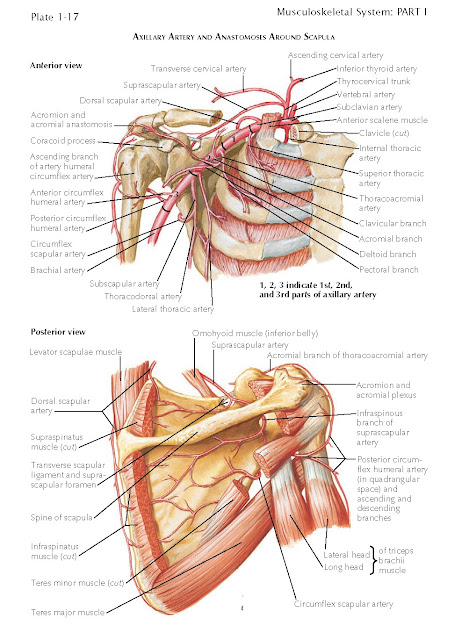 The third division of the axillary artery is distal to the pectoralis minor tendon and gives off three branches: the subscapular, anterior humeral circumflex, and posterior humeral circumflex arteries. The sub- scapular artery is the largest branch of the axillary artery. It divides into the circumflex scapular and thoracodorsal branches. The circumflex scapular artery, the larger branch, passes posteriorly through the triangular space, turns onto the dorsum of the scapula, and ramifies in the infraspinatous fossa. Here, it supplies the muscles of the dorsum of the scapula and anastomoses with the dorsal scapular artery and the terminals of the suprascapular artery. By branches given off in the triangular space, it supplies the subscapularis and the two teres muscles. The thoracodorsal artery is the principal supply of the latissimus dorsi muscle, entering it on its deep surface in company with the thoracodorsal nerve. It frequently has a thoracic branch that substitutes for the inferior portion of the distribution of the lateral thoracic artery.
The two circumflex humeral arteries branch next. The anterior vessel gives off an ascending branch that continues to become the arcuate artery. This vessel provides the majority of the blood supply to the humeral head. The posterior circumflex artery passes posteriorly with the axillary nerve through the quadrangular space. It encircles the surgical neck of the humerus and anastomoses with the anterior circumflex humeral artery.
The axillary artery becomes the brachial artery as it crosses the inferior limit of the axilla at the lower border of the teres major. It enters the arm accompanied by two brachial veins as well as the median, ulnar, and radial nerves. The axillary vein is anterior and inferior to the artery in normal posture but rises and is more completely anterior to the artery when the arm is abducted.