Normal Skin Histology
The integumentary system is composed of multiple subunits that work in unison. The skin and its appendageal structures make up the integumentary system. There are three main layers to the skin: epidermis, dermis, and subcutaneous tissue. Within the epidermis, the principal skin cell is the keratinocyte. Other cells found in the epidermis include melanocytes, Merkel cells, and Langerhans cells. The main cell type found within the dermis is the fibroblast. Fibroblasts make collagen, which forms the mechanical support for the skin. The dermis is a region of high vascularity. The subcutaneous fat tissue is found directly beneath the dermis and is composed primarily of adipocytes.


The normal human epidermis varies extensively in thickness in different regions of the body. It is thickest on the back and thinnest on the eyelids and on the scrotal skin. The epidermis can be subdivided into five components: stratum basale, stratum spinosum, stratum granulosum, stratum lucidum, and stratum corneum. The stratum lucidum is found only on the skin of the palms and soles. Each layer of the epidermis has important anatomical and physiological functions. 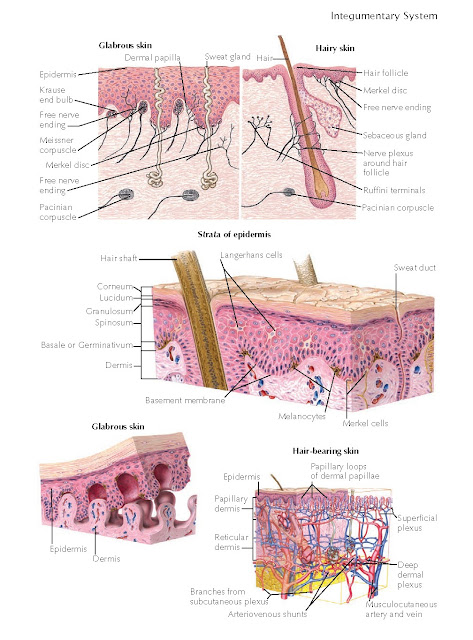 The stratum basale is the deepest layer. It consists of cuboidal epithelium sitting atop a basement membrane zone. The stratum basale contains the proliferating keratinocytes, which are constantly undergoing replication to replace the overlying epidermis. It takes approximately 28 days for a basal keratinocyte to progress to the outermost layer of the stratum corneum. Melanocytes and Merkel cells can also be found within the stratum basale. Melanocytes are pigment-forming cells; they transfer their pigment to neighboring keratinocytes. Merkel cells are modified nerve endings and have been found to be important as mechanoreceptors.
The stratum spinosum is many cell layers thick and is recognized by the intercellular connections among adjacent keratinocytes, which are seen on light micros- copy as tiny spines. From the lower to the upper layers of the stratum spinosum, the keratinocytes progressively become flatter in appearance.
The stratum granulosum is recognized by the large number of basophilic keratohyalin granules within its keratinocytes. This stratum is typically 2 to 4 cell layers thick. The keratohyalin granules are composed primarily of the protein profilaggrin; they vary from 1 to 4 µm in diameter. Profilaggrin is the precursor to filaggrin, an essential protein that is required for the integrity of the overlying epidermis.
The stratum lucidum occurs only in the skin of the palms and soles. It is composed of a translucent eosinophilic layer. The stratum lucidum is made up of tightly packed squamous keratinocytes.

The stratum corneum, the outermost layer of skin, is made up of anucleate, cornified keratinocytes. Kerati- nization (cornification) is a complex process that results in the appearance of the stratum corneum. As cells progress up the stratum corneum, they are shed in the process known as desquamation.
The dermis is primarily composed of collagen, which is produced by fibroblasts. This portion of the skin contains a highly vascular network that is responsible for the nutrition of the skin and for thermoregulation. This network includes a deep dermal plexus and a superficial plexus. The superficial plexus is responsible for thermoregulation. It undergoes vasoconstriction during exposure to cold temperatures and vasodilation in times of warm temperature. The dermis can be split into two regions, called the papillary and the reticular portions. The papillary dermis is juxtaposed to the overlying epidermis and interdigitates with it. The papillary dermis and the epidermis are connected by the basement membrane zone. This zone contains many unique proteins. These proteins are the targets for the various autoantibodies that can be found in patients with autoimmune blistering diseases.
The subcutaneous tissue is composed of adipocytes. This tissue’s main functions are storage of energy, insulation, and cushioning. The adipocytes are closely packed in a connective tissue septum with associated blood vessels and nerve endings.
There are many types of skin appendages, including hair follicles, sebaceous glands, eccrine glands, apocrine glands, and various nerve endings.