Overview of Control Mechanisms
The digestive system is controlled by a fascinatingly complex interaction between extrinsic and intrinsic hormones, the extrinsic and intrinsic nervous systems, and a unique electrical control system. Recent increases in our understanding of the neural and hormonal regulatory systems have shown that many of the neurotransmitters crucial to functioning of the CNS are also found in the gut. In fact, many were first identified in the gut and then shown to also exist in other organs, including the brain. 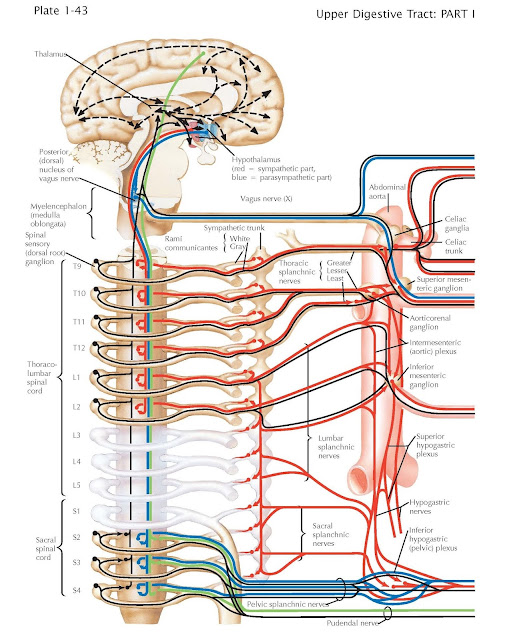 Electrical Control System
Effective, well-organized contractions throughout the tubular digestive system are of critical importance to digestion and absorption in the mixing and propelling of intraluminal contents. As in other muscles, contractions result from cell membrane depolarizations that are recorded as action potentials. These membrane changes are responsible for effective electromechanical coupling by opening calcium channels that stimulate actin-myosin interactions. To cause coordinated, circular contractions that will effectively move luminal contents, these depolarizations must occur around the lumen. This is made possible by an electrical syncytium that preferentially creates simultaneous depolarizations around the lumen. Depolarizations occur in a rhythmic fashion from electrical pacemaker potentials created by the interstitial cells of Cajal. These paced depolarizations, which facilitate coordinated contractions around the lumen, are known as slow waves. They are not seen in the esophagus or fundus of the stomach but first develop in the upper body of the stomach at a frequency of three cycles per minute. Gastric paced slow waves progress down the stomach and end at the pyloric sphincter. In the small intestine, the rate of slow waves created by the pacemakers is higher in the duodenum (17 to 18 cycles per minute) than the jejunum and even slower in the ileum (14 to 16 cycles per minute). This gradient of slow wave frequency contributes to the proximal to distal movement of luminal contents. The progressive movement of slow waves from the proximal to the distal lumen also permits peristalsis to occur in a caudal direction. Slow wave frequencies in the colon are more complex and less uniform but are generally thought to occur at three to six cycles per minute.
Slow waves result in forceful mixing or peristaltic contractions only in the presence of stimuli that result in further cell membrane depolarizations that create an action potential. The presence of an electrical syncytium favoring circular depolarizations around the lumen permits a circular contraction to be produced from the stimulus that creates the action potential. Thus, slow waves control spatial relationships and directions of movement of gastric and intestinal luminal contractions that were created by action potentials that created electrical responses. Action potential stimulation may originate from extrinsic hormones, extrinsic neurotransmitters, intrinsic hormones, or intrinsic neurotransmitters.

Extrinsic Endocrine System
Extrinsic hormones that have a broad influence on all organ systems also affect the gut; they include thyroid hormones, adrenocorticotropic hormone, corticosteroids, mineralocorticoids, corticotropinreleasing factor, and leptin. Leptin is a CNS hormone that has a primary role in influencing digestion by reducing food intake and modulating the metabolism of nutrients. The complex role of hormones in the regulation of appetite and satiety is discussed in Plates 1-56 and 1-57. Both deficiencies and excesses of thyroid hormones may lead to gut malfunction. Patients with hypothyroidism often complain of constipation and loss of appetite. If the disorder progresses to myxedema, motility dysfunction can develop throughout the digestive system, with impaired peristalsis and contractility.
Corticotropin-releasing hormone has a major role in the physiologic response to stress. Levels of this hypothalamic hormone increase during actual stressful events, as when a person is facing a traumatic situation, but also during events that are not inherently stressful but are perceives as stressful. The latter situation leads to challenges in diagnosing and managing functional bowel disorders.

Extrinsic Nervous System
The previous theory that digestive system functions are primarily regulated by the autonomic nervous system and, thus, the CNS is overly simplistic. The influence of the autonomic nervous system is mediated by a balance of the stimulatory effects of the para-sympathetic nervous system and inhibitory effects of adrenergic neurons in the sympathetic nervous system.
Only 10% to 20% of vagal nerves are efferent, far too few to control the many complex responses of the seven digestive organs, much less all the other visceral organs. Direct input to gut functions by the autonomic nervous system is important, but the system serves as the primary control system only in the striated muscle regions of the pharynx and upper esophagus via cranial nerves and in the rectum and anal sphincter via sacral and pelvic nerves. Sympathetic nerves reach the gut to mediate blood flow and help to “shut down” the gut during the fight-or-flight response via the intermediolateral column to splanchnic nerves originating from T2 to L3. These then innervate the gut via nerves whose bodies are in the celiac, superior mesenteric, or inferior mesenteric ganglia.
The autonomic nervous system primarily serves to modify local gut reflexes, but it also plays a critical role in a variety of gut reflexes and in communicating afferent information to the brain. Medications that inhibit cholinergic neurons are a cornerstone of treatment of spastic disorders of the entire gastrointestinal tract. Anticholinergics are also widely used to reduce oral secretions during endoscopy, oral surgery, or anesthesiology. The importance of vagal stimulation of gastric secretions explains why surgical selective vagotomy is sometimes used to manage complex ulcer disease.
The sympathetic nervous system’s fight-or-flight reflex leads to diarrhea and contributes to functional disorders in patients plagued by anxiety and hypervigilance. Increased sympathetic tone during stress associated with trauma or sepsis is needed to maintain the blood pressure and circulation but often results in a severe reduction in gut blood flow known as a mesenteric steal. Decreased blood flow reduces metabolic support for the intrinsic protective mechanisms of the stomach, resulting in unopposed acid injury and severe, at times even hemorrhagic, gastritis. 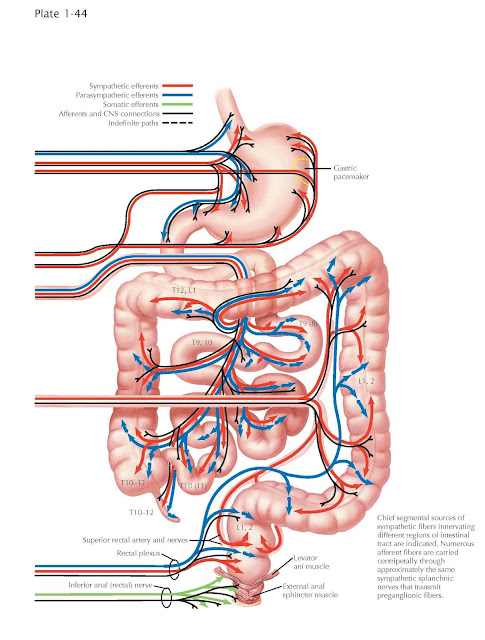 Intrinsic Endocrine System
The field of endocrinology was conceived when the first hormone, secretin, a major hormone in the digestive system, was discovered in 1914. Our knowledge of the digestive system’s intrinsic endocrine system’s transmitters, functions, and molecular processing has grown exponentially since then. Gut hormones stimulate the coordination of widely diverse functions in each of the digestive organs to work in concert to digest and absorb food. Gut hormones achieve this by modifying secretion, absorption, motility, and metabolism.
Gut hormones alter metabolism not only in the digestive system but throughout the body. Insulin released from pancreatic islet cells is the best example of this important role of gut hormones. Other gut hormones that have a major role in modifying metabolism include glucagon, cholecystokinin, peptide YY, insulin- like growth factor 1, and ghrelin. Ghrelin is a hormone released from the stomach and proximal small bowel that increases food intake.
Many gut hormones influence gastrointestinal motility. Cholecystokinin and secretin coordinate the response to food intake by altering gastric emptying, duodenal contractions, gallbladder contractions, and contractions of the sphincter of Oddi (relaxed) and pyloric sphincter (contractions). Perhaps the most fascinating physiologic event of the digestive system is coordinated emptying of the upper digestive tract during fasting. This occurs when forceful contractions of phase III of the interdigestive motor complex, known as the intestinal housekeeper, are initiated by the hormone motilin.
Well-defined clinical syndromes have been recognized that are due to neuroendocrine tumors. Advances in technology have led to the recognition that such hormone-secreting tumors are more common than previously appreciated. These important hormone regulators of gut function and the disorders for which they are known to be responsible are discussed in Plate 1-49. It can readily be appreciated that the digestive system’s seven organs are regulated by a complex interaction of the extrinsic nervous system and extrinsic hormonal system which modulates the more reflexive “hard-wired” reflexes of the enteric nervous system and intrinsic hormonal system. The clinician’s challenge is to determine which of these mechanisms is at play in causing a patient’s symptoms and disease.