Enteric Nervous System
The digestive system’s enteric nervous system is by far the largest neural network outside of the CNS and contains more neurons than the spinal column. The variety of neurotransmitters is similar to that in the CNS. The complexity with which these transmitters interact is fascinating and intricate. This system provides the local “hard wiring” for all local gut reflexes, most notably peristalsis. Local responses are modulated by input from the other regulatory systems (extrinsic hormones, intrinsic hormones, parasympathetic and sympathetic nerves from the autonomic nervous system, and other enteric nerves). 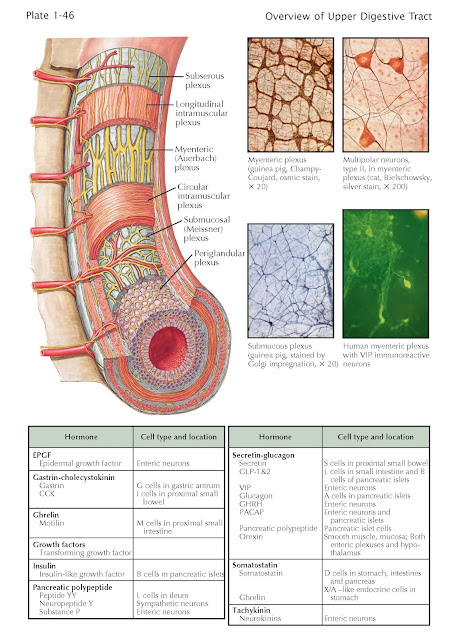 The bodies of neurons in the enteric nervous system are located in two layers in the gut, the Auerbach submucosal plexus and the Meissner myenteric plexus. The Auerbach plexus is located on the luminal side of the circular muscle and has sensory neurons, effector neurons, and interneurons. The simplest description of its function is that its neurons serve primarily to integrate events and conditions in the lumen with the motility functions of the muscularis mucosa and the secretory and vascular functions of the submucosa. It is important to add, however, that reflexes have been identified from the submucosal nerves to the myenteric nerves that mediate peristalsis as well as to sensory sites in the dorsal root ganglia and mesenteric ganglia. For example, light mucosal stimulation alters the peristaltic reflex via enteric nerves in the mucosa to the submucosal ganglia and to extramural ganglia in the mesentery and paraspinal ganglia.
It is similarly reasonable to view the myenteric plexus as having the primary function of integrating all local reflexes, including local contractions and peristalsis, as well as the blood flow needed to perform these functions. For example, although most motor neurons are very short, interneurons containing serotonin travel several centimeters to integrate the peristaltic reflex.
The neurotransmitters in the two intrinsic plexuses are incredible in number and complexity. Enteric neurons are characterized by their morphology and neurotransmitter content. Over 30 neuropeptides have been identified and sequenced. These transmitters are grouped in families based on similarities in amino acid sequences. Although an encyclopedic summary is inappropriate for this chapter, a brief listing of well-defined neurotransmitter families found in the enteric nervous system of the digestive system is shown. Regrettably, the names initially assigned to these transmitters often had little to do with the primary functions that they were later found to perform. Furthermore, the list of functions that are influenced by each transmitter belies any effort at simplification. An anatomic factor that prevents an oversimplification of the role of these transmitters is the demonstration that a single neuron may contain more than one neurotransmitter. Colocalization of neurotransmitters occurs across different classes of transmitters, including peptidergic and nonpeptide transmitters, most notably nitric oxide. The incredibly complex, specific influence these nerves have on functions has been further demonstrated by the fact that in response to various stimuli, there may be selective release of colocalized transmitters from a single neuron. Characterization of transmitters as having specific functions risks oversimplification because the transmitters may have different effects depending on the cell of origin. Some common patterns have been noted, however. The tachykinin-neurokinin family of peptides, especially NK-1 (substance P and substance K), are often shown to be stimulating motor neurons. In contrast, vasoactive intestinal peptide is invariably an inhibitory motor neuron, often colocalized with nitric oxide. Somatostatin also inhibits many gastrointestinal functions, including absorption, secretion, and blood flow. Neuropeptide Y is found throughout the digestive tract colocalized with sympathetic transmitters such as norepinephrine. Gastrin-releasing peptide not only stimulates the release of gastrin, but within the enteric nervous system it can function as a transmitter in interneurons. Calcitonin generelated peptide is most commonly seen as a transmitter in afferent neurons, especially those seen to reach the esophageal or intestinal lumen.
The role of the enteric nervous system, with its highly diverse neurons and complex array of interacting neurotransmitters, emphasizes how incredibly fine-tuned and integrated are the local reflexes of gut motility, secretion, absorption, and circulation.