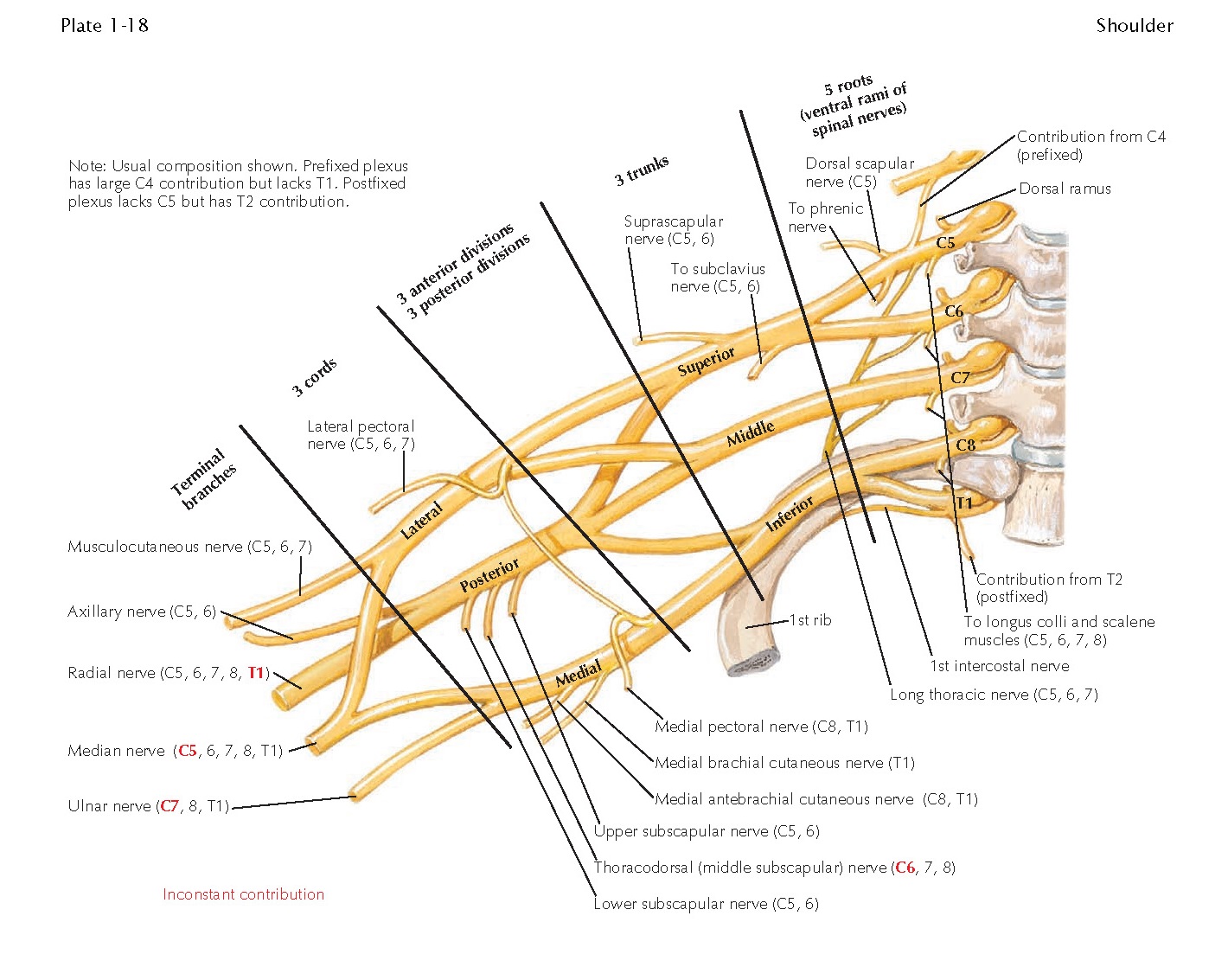 The innervation of the upper extremity is provided by the branches of the brachial plexus. This large nerve complex does not originate in the axilla, although the greater part of its branching and the formation of the definitive nerves of the limb do take place in this region. Although anatomic variants are not uncommon, a thorough understanding of the classic description of this network is essential.

The brachial plexus is formed by the ventral rami (roots) of the fifth to the eighth cervical nerves (C5 to C8) and the greater part of the first thoracic nerve (T1). Small contributions may come from the fourth cervical nerve (C4) and the second thoracic nerve (T2). The sympathetic fibers conducted by each root are added as they pass between the scalene muscles. Each of the ventral rami of C5 and C6 receives a gray ramus communicans from the middle cervical ganglion. The cervicothoracic ganglion (inferior cervical plus first thoracic ganglia) contributes gray rami to the C7, C8, and T1 roots of the plexus.
The ventral rami of C5 and C6 unite to form the superior trunk, the ramus of C7 continues alone as the middle trunk, and the rami of C8 and T1 form the inferior trunk. Each trunk separates into an anterior and a posterior division. The anterior division supplies the originally ventral parts of the limb, and the posterior division supplies the dorsal parts. All the posterior divisions unite to form the posterior cord of the plexus, the anterior divisions of the superior and middle trunks form the lateral cord, and the medial cord is the continuation of the anterior division of the inferior trunk. Thus, the posterior cord contains nerve bundles from C5 to T1 destined for the back of the limb, the lateral cord is formed of nerve bundles from C5 to C7 for the anterior portion of the limb, and the medial cord carries anterior nerve components from C8 and T1. The cords are named to show their relationships to the axillary artery.
The terminal branches regroup further and form the terminal nerves of the plexus. Large portions of the lateral and medial cords form the median nerve. The remainder of the lateral cord constitutes the musculocutaneous nerve; the rest of the medial cord is the ulnar nerve. The posterior cord gives off the axillary nerve at the lower border of the subscapularis muscle, and the remainder continues distally as the radial nerve.
In addition to these terminal branches several nerves arise from the roots and cords of the plexus (T10). These are grouped according to the portion of plexus that gives them origin.