The superior lateral cutaneous nerve of the arm (C5, C6) is the termination of the lower branch of the axillary nerve of the brachial plexus. Leaving the axillary nerve, it turns superficially around the posterior border of the lower third of the deltoid muscle to pierce the brachial fascia. Its cutaneous distribution is the lower half of the deltoid muscle and the long head of the triceps brachii. 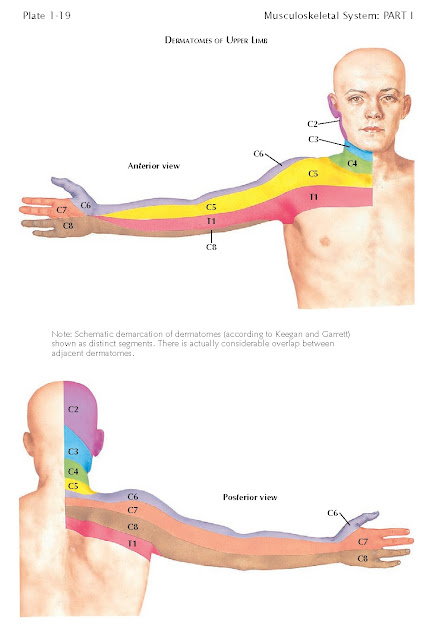 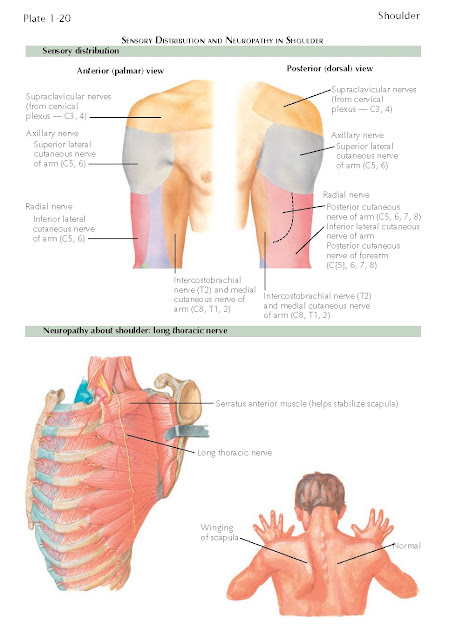 The intercostobrachial nerve (T2) is the larger part of the lateral cutaneous branch of the second thoracic nerve. In the second intercostal space at the axillary line, it pierces the serratus anterior muscle to enter the axilla. Here, it usually anastomoses with the medial brachial cutaneous nerve and then pierces the brachial fascia just beyond the posterior axillary fold. Its cutaneous distribution is along the medial and posterior sur- faces of the arm from the axilla to the elbow.
A complete neurologic examination of the shoulder tests the just-mentioned dermatomes as well as the coordinated contraction of the shoulder girdle musculature (T11). One commonly encountered neuropathy is long thoracic nerve dysfunction, which can result from axillary lymph node dissection. Physical examination reveals medial winging of the scapula when the arm is placed anterior to the plane of the body, which is exaggerated by pushing against a wall.