Paediatrics And Child Health
Paediatrics is not just about the recognition and treatment of children’s illness. It also encompasses child health, covering all aspects of growth and development, promotion of children’s health and the prevention of disease. It includes every aspect of life from birth through adulthood. In many countries, such as the UK, paediatric care extends up to the age of 18 and covers all children from the very premature infant to teenagers in the workforce.


All aspects of paediatrics are coloured by the fact that the child is growing and developing both physically and emotionally. Anyone involved in the medical care of children needs to have an understanding of children’s normal development and a realization that children must not be considered as mini adults. In paediatrics, more than in any other branch of medicine, the needs of the family and carers must also be taken into consideration. At the end of childhood, a smooth transition of care to adult services is needed, especially for those with chronic conditions. 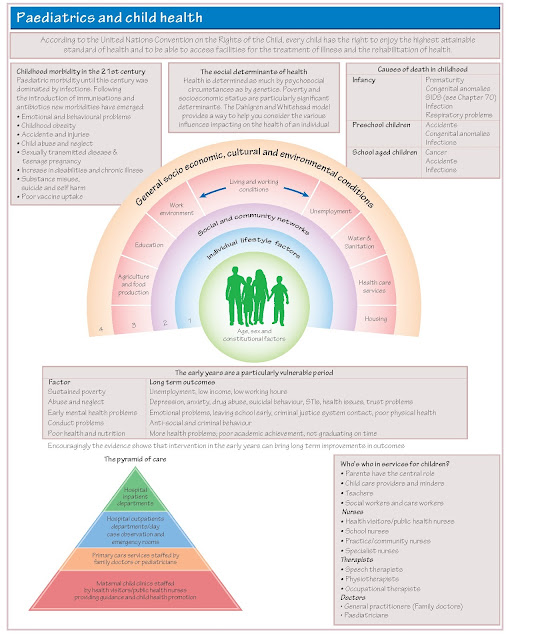 The changing face of paediatrics and child health
One hundred years ago, infection was the major cause of morbidity and mortality in childhood. Improvements in the environment, sanitation and housing began the trend for advancement in pop- ulation health, and this was accelerated by the introduction of immunizations and antibiotics. Changes have occurred in society too, many of which are beneficial to children and their health and well-being. Children are better and more widely protected than was the case a century ago. Educational standards, social support, medical care and knowledge about child development have all improved, and child abuse has become unacceptable.
However, inequalities in both wealth and health are increasing, and the ‘gap’ between the richest and poorest has a profound impact on children’s lives. Referrals for emotional and behavioural problems are rising dramatically, and childhood obesity is seen as the major public health problem of our time. A relatively new aspect of paediatrics is the understanding that many determinants of adult health have their origins antenatally, in infancy and in the early years of childhood.
Health care has also changed in paediatrics. Over the last 40 years, we have seen more children admitted to hospital, but the experience of hospitalization has changed. Once visiting hours for parents were limited to 30 minutes per day, but now the normal expectation is that parents will stay with their child. Where possible every effort is made to keep children out of hospital, and many aspects of specialized complex care have become available in the community. Even for the acutely ill child, short-stay observation wards now allow serious causes of illness to be excluded and children to be discharged to recover at home. A significant proportion of admissions are for social reasons, for example, if there are concerns that the family is unable to cope or they live too far away to safely send the child home.

The determinants of health
The way health is considered has also changed over the decades. In the early part of the 20th century, health was considered to be the absence of disease. However, in 1948, the World Health Organization changed the way we look at health when it declared that ‘health isa state of complete physical, mental, and social well-being, and not merely the absence of disease and infirmity’. In paediatrics, this has been accompanied by a more holistic approach to children, with greater emphasis on well-being especially for those coping with chronic conditions and disabilities.
Two major factors have changed priorities in the care of children and their services. The first is the understanding that socioeconomic status has a powerful influence over many aspects of children’s health. Poverty is now known to be a significant predictor of a number of major measures of health, including:
•        Birth weight
•        Perinatal morbidity
•        Sudden infant death syndrome (SIDS)
•        Admission to hospital
•        Obesity.
The other factor that has changed the way we view disease arises from the ‘Barker hypothesis’. Barker and his colleagues brought to light how events in pregnancy and infancy can have a long-term effect on health. Exploring infant growth records from the last century, they showed that babies born small for gestational age were at significantly increased risk for hypertension, cardiovascular dis- ease, diabetes and obesity in adult life, particularly if they showed rapid catch-up growth in the first year of life. Their findings demonstrated how critical the early years are in programming later health outcomes.
Rather reassuringly, economists have shown that although the preschool years are a vulnerable period, they are also a critical period amenable to intervention. The evidence clearly shows that when society invests in the early childhood years and provide support, community programmes, guidance for parents and education, there are profound benefits on many later outcomes such as physical health, academic achievement, mental health, antisocial behaviour and substance abuse.

Types of paediatric problems
With the changing face of childhood disease, health professionals need to be competent at managing a broad variety of conditions. These conditions include the following broad categories:
•        Acute illnesses such as bronchiolitis, respiratory infections and anaphylaxis
•        Chronic illnesses such as asthma, epilepsy, diabetes and cancer
•        Disabilities both physical and intellectual
•        Injury: accidental and non-accidental
•        Disorders of eating and nutrition, including weight faltering, obesity and anorexia
•        Mental health disorders such as attention deficit disorder, challenging behaviour, depression and anxiety.
Some of the particular challenges we need to face are emotional and behavioural problems, childhood obesity, child abuse and neglect, accidents and injuries, sexually transmitted disease and teenage pregnancy, increase in disabilities and chronic illness, substance misuse, suicide and self-harm and poor vaccine uptake. By directly treating childhood conditions, by ensuring effective screening and prevention programmes and by advocating for better public health interventions, paediatricians and all those working in child health have a fantastic opportunity to influence the longterm outcome of their patients. Paediatrics is a challenging specialty but a very rewarding one.

Related Posts
Pediatrics
Home
Give us your opinion