Skin Physiology: The Process Of Keratinization


The stratum corneum is a highly organized layer that is relatively strong and resistant to physical and chemical insults. This layer is critically important in keeping out microorganisms; it is the first line of defense against ultraviolet radiation; and it contains many enzymes that can degrade and detoxify external chemicals. The stratum corneum is also a semipermeable structure that selectively allows different hydrophilic and lipophilic agents passage. However, the most obvious and most studied aspect of the stratum corneum is its ability to protect against excessive water and electrolyte loss. It acts as a barrier to keep chemicals out, but more importantly, it keeps water and electrolytes inside the human body. Transepidermal water loss (TEWL) increases as the stratum corneum is damaged or disrupted. The main lipids responsible for protection against water loss are the ceramides and the sphingolipids. These molecules are capable of binding many water molecules. 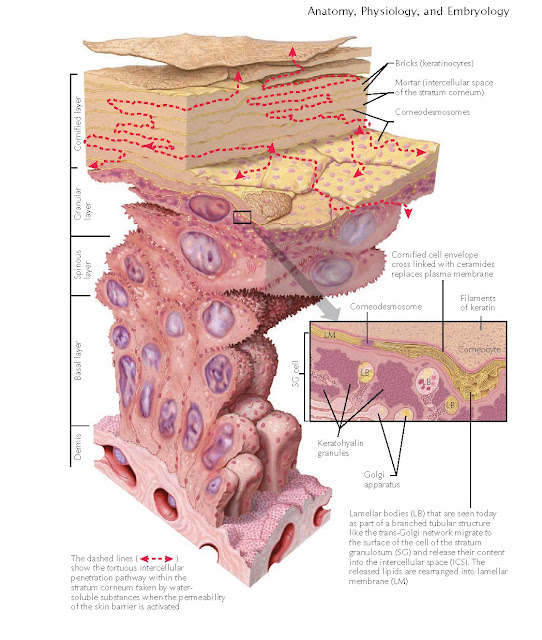 As keratinocytes migrate from the stratum basale and journey through the layers of the epidermis, they undergo characteristic morphological and biochemical changes. The keratinocytes flatten and become more compacted and polyhedral. The resulting corneocytes become stacked, like bricks in a wall. These corneocytes are still bonded together by desmosomes, which are now called corneodesmosomes.
The stratum granulosum gets its name from the appearance of multiple basophilic keratohyalin granules present within the keratinocytes. These granules are largely composed of the protein profilaggrin. Profilaggrin is converted into filaggrin by an intercellular endo- proteinase enzyme. Filaggrin is so named because it is a filament-aggregating protein. Over time, filaggrin is broken down into natural moisturizing factor (NMF) and urocanic acid. NMF is a breakdown product of filaggrin that slows water evaporation from the corneocytes.
The intercellular space is composed of lipids and water. The lipids are derived from the release of the lamellar bodies (Odland bodies). Ceramides make up the overwhelming majority of the contents of the lamellar bodies. Other components include free fatty acids, cholesterol esters, and proteases. The lamellar bodies fuse with the cell surface and release their contents into the intercellular space. The fusion of the lamellar body with the cell surface is dependent on the enzyme trans-glutaminase I.

Concurrently. the cornified cell envelope (CCE) develops. The CCE proteins envoplakin, loricrin, periplakin, small prolinerich proteins, and involucrin are cross-linked in various arrangements by transglutaminase I and transglutaminase III, forming a sturdy scaffolding along the inner surface of the keratinocyte cell membrane. As the keratinocyte migrates upward, the cell membrane is lost, and the ceramides that are released begin cross-linking with the CCE proteins. The cells continue to move toward the surface of the skin and begin to lose their nucleus and cellular organelles. The loss of these organelles is mediated by the activation of certain proteases that can quickly degrade protein, DNA, RNA, and the nuclear membrane.
Once the cells reach the outer layers of the stratum corneum, they begin to be shed. On average, a keratinocyte spends 2 weeks in the stratum corneum before being shed from the skin surface in a process called desquamation. Shedding is achieved by the final degradation of the corneodesmosomes by proteases that destroy the desmoglein-1 protein.
Keratinization is especially important in the diseases of cornification. Many skin diseases have been found to involve defects in one or more proteins that are critical in the process of cornification. Examples are lamellar ichthyosis, which is caused by a defect in the transglutaminase I enzyme, and Vohwinkel’s syndrome (keratoma hereditarium mutilans), which results from a genetic mutatio in the loricrin protein and a resultant defective CCE.