The Venous System
The venules and veins return the blood from the microcirculation to the right atrium. However, they do not serve merely as passive conduits. Instead, they have a crucial active role in stabilizing and regulating the venous return of blood to the heart.


The venous system differs from the arterial system in two important respects. First, the total volume (and cross-sectional area) of the venous system is much greater than that of the arterial system. This is because there are many more venules than arterioles; venules also tend to have larger internal diameters than arterioles. Second, the veins are quite thin walled, and can there-fore expand greatly to hold more blood if their internal pressure rises.
As a result of its large cross-sectional area, the venous system offers much less resistance to flow than the arterial system. The pressure gradient required to drive the blood through the venous system (15 mmHg) is therefore much smaller than the pressure needed in the arterial system (80 mmHg). The average pressure in the venae cavae at the level of the heart (the central venous pressure) is usually close to 0 mmHg (i.e. atmospheric pressure). The flow of blood back to the heart is aided by the presence of one-way venous valves in the arms and especially the legs, which prevent backflow. 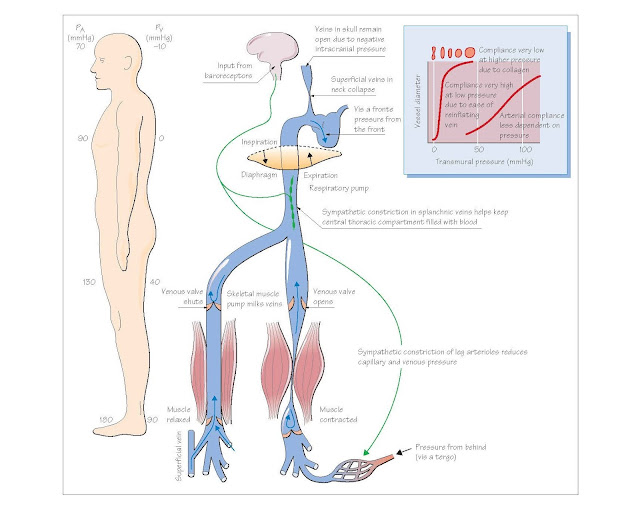 Venous Arterial Compliance
The graph in Figure 22 (upper right) illustrates the relationship between pressure and volume in a typical vein and artery. The slope of the volume – pressure curve is referred to as the compliance. Compliance is a measure of expandability. Veins are much more compliant than arteries at low pressures (0–10 mmHg). Small increases in venous pressure in this range therefore cause large increases in venous blood volume.
One reason for high venous compliance is that their thin walls allow veins to collapse at low internal pressures. Only small increases in pressure are needed to ‘reinflate’ a collapsed vein with blood until it has nearly rounded up. At higher pressures, however, venous compliance decreases dramatically (see graph) because the slack in rigid collagen fibres in the venous wall is rapidly taken up. This limit on the expandability of the veins is important in limiting the pooling of blood in the veins of the legs that occurs during standing.

The Veins As Capacitance Vessels
Because of their large volumes and high compliance, the veins/ venules accommodate a much larger volume of the blood (∼70% of the total) than do the arteries/arterioles (∼12%). They are there- fore termed capacitance vessels, and are able to serve as blood volume reservoirs. During exercise, and in hypotensive states (e.g. during haemorrhage), sympathetically mediated constriction of the veins/venules, notably in the splanchnic (including the gastrointestinal tract and liver) and cutaneous circulations, displaces blood into the rest of the cardiovascular system. In particular, the resulting reduction of the venous volume increases the volume of blood in the central thoracic compartment (i.e. the heart and pulmonary circulation), thereby boosting cardiac output, assisting perfusion of other essential vascular beds and helping to maintain the blood pressure.

Effects Of Posture
When the upright position is assumed, the pull of gravity increases the absolute pressures within both the arteries and veins of the lower extremities. The average arterial and venous blood pressures in a normal adult standing quietly are about 100 and 0 mmHg, respectively, at the level of the heart, while in the feet the pressures are about 190 and 90 mmHg, respectively. However, gravity does not affect the pressure gradient driving the blood circulation, because the difference between the arterial and venous pressures is similar (100 mmHg) at both levels. Therefore standing does not stop blood from flowing back to the heart.
The increased pressure within the veins of the lower extremities causes them to distend, so that about 500 mL blood is shifted into this part of the circulation. The rise in hydrostatic pressure within the capillaries of the lower extremities increases fluid filtration, causing a progressive loss of plasma volume into the tissues of the legs and feet. The resulting loss of fluid from the central thoracic compartment lowers cardiac output.
These potentially harmful effects are limited by the baroreceptor and cardiopulmonary reflexes, which respond to a fall in the pulse pressure (see Chapter 27). These cause an increased heart rate and widespread vasoconstriction. This limits the loss of blood from the central thoracic compartment and slightly raises mean arterial blood pressure (MABP) and total peripheral resistance (TPR). The cardiac output falls by about 20%. A local sympathetic axon reflex also reduces blood flow to the lower extremities, limiting fluid filtration.
In the upright position, the reduction of intravascular pressures above the heart causes the partial collapse of superficial veins, although the deeper veins remain partly open because their walls are anchored to surrounding tissues. Standing also causes a down- ward displacement into the spinal canal of the cerebrospinal fluid bathing the central nervous system (CNS), creating a negative pressure inside the rigid cranium that prevents cerebral veins from collapsing. Because cerebral venous pressure is not able to fall as much as arterial pressure, cerebral blood flow decreases by 10–20%.

The Skeletal Muscle Pump
Even during quiet standing, the leg muscles are stimulated by reflexes to contract and relax rhythmically, causing swaying. During contraction, veins within the muscles are squeezed, forcing blood towards the heart, as the venous valves prevent retrograde flow. Upon relaxation, these veins expand, drawing in blood from venules and from superficial veins that communicate with the muscle veins via collaterals (Figure 22). This skeletal muscle pump thus ‘milks’ the veins, driving blood towards the heart to assist venous return. The skeletal muscle pump is greatly potentiated during walking and running, dramatically lowering the venous pressure in the foot to levels as low as 30 mmHg.

The Respiratory Pump
During inspiration, downward displacement of the diaphragm causes the intrathoracic pressure to fall and the intra-abdominal pressure to rise. This increases the pressure gradient favouring venous return, and vena caval flow rises. An opposite effect occurs during expiration. During straining movements in which there is forced expiration against a closed glottis (e.g. the Valsalva manoeuvre), the rise in intrathoracic pressure severely reduces venous return.

Effect Of Cardiac Contraction
Downward displacement of the ventricles during systole pulls on the atria, expanding them and drawing in blood from the venae cavae and pulmonary veins. When the valves between the atria and ventricles then open during diastole, the blood is drawn in from these veins by the expansion of the ventricles, further aiding venous return. Venous return is therefore driven not only by the upstream pressure, but also (to a smaller extent) by downstream suction.