Local Control Of Blood F﻿Low
The activity of the sympathetic nervous system provides for centrally coordinated control of vascular tone (see Chapters 27 and 28) and serves to maintain constant arterial blood pressure. However, there are additional mechanisms that regulate vascular tone. Local mechanisms arise either from within the blood vessel itself, or from the surrounding tissue. These local mechanisms function primarily to regulate flow. Regulation tends to be most important in organs that require a constant blood supply, or in which metabolic needs can increase markedly (brain, kidneys, heart, skeletal muscles).


Local mechanisms have two main functions. First, under basal conditions they regulate local vascular resistance to maintain the blood flow in many types of vascular beds at a nearly constant level over a large range of arterial pressures (50–170 mmHg). This tendency to maintain a constant flow during variations in pressure is termed autoregulation. Autoregulation prevents major fluctuations in capillary pressure which would lead to uncontrolled movement of fluid into the tissues.
Second, when a tissue requires more blood to meet its metabolic needs, local mechanisms cause dilatation of resistance vessels and upregulate blood flow. This response is referred to as metabolic vasodilatation. Autoregulation may persist under these conditions, but is adjusted to maintain flow around the new set point. 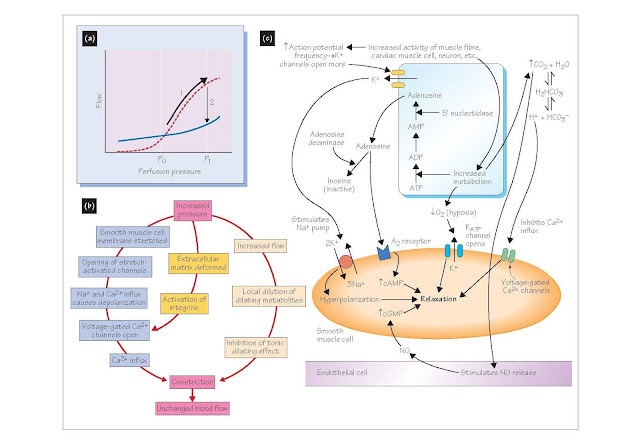 Autoregulation
Figure 23a illustrates the phenomenon of autoregulation. When the upstream pressure driving blood through a resistance artery is suddenly increased to P1 from its starting level P0, the artery dilates passively and blood flow immediately rises as predicted by Poiseuille’s law (arrow 1). However, within a minute the resistance artery responds to the increased pressure by actively constricting (arrow 2), thereby bringing blood flow back down towards its initial level (solid line). Similarly, decreases in upstream pressure cause rapid compensatory dilatations to maintain flow. Autoregulation ensures that under basal conditions blood flow remains nearly constant over a wide range of pressures, and is particularly important in the heart, the brain and the kidneys. Two homeostatic negative feedback mechanisms are involved: the myogenic response and the effect of vasodilating metabolites (Figure 23b).
The myogenic response is probably controlled by sensors in the plasma membrane of vascular smooth muscle cells which react to changes in pressure and/or stretch. There is increasing evidence that integrins, membrane-spanning proteins that act as adhesion molecules linking the extracellular matrix with the cytoskeleton (see Chapter 4), may constitute one class of such sensors. Integrins have two subunits (i.e. they are dimers), designated α and β, and there are multiple isoforms of each subunit. Recent studies indicate that integrins consisting of α5β1 and αvβ3 dimers are necessary for the myogenic response. It is proposed that when pressure increases, changes in the conformation of extracellular matrix proteins occur, and activate the integrins. Integrin activation induces the opening of L-type voltage-gated Ca2+ channels, causing Ca2+ influx and vasoconstriction. Increased pressure may in addition stimulate stretch-activated channels, leading to Na+ and Ca2+ influx, and cell depolarization which is an additional stimulus for opening L- type Ca2+ channels. The identities of the stretch-activated channels involved are uncertain, but there is evidence supporting the involvement of two types of transient receptor potential (TRP) channels: TRPC6 and TRPM4. The opposite processes (i.e. hyperpolarization, and closing of stretch-activated and voltage-gated Ca2+ channels) occur when pressure falls, causing vasodilatation.
Cellular metabolism results in the production of vasodilating metabolites or factors (Figure 23c) that diffuse into the tissue spaces and affect neighbouring arterioles. If blood flow increases, these substances tend to be washed out of the tissue, leading to an inhibition of vasodilatation that counteracts the rise in blood flow. Conversely, decreased blood flow causes a local accumulation of metabolites, leading to a homeostatic vasodilatation.

Metabolic And Reactive Hyperaemia
When metabolism in cardiac and skeletal muscle increases during exercise, tissue concentrations of vasodilating metabolites rise markedly. Similarly, focal changes in brain metabolism accompany diverse types of mental activity, causing enhanced local production of metabolites. The increased presence of such factors in the interstitium causes a powerful vasodilatation, termed metabolic or functional hyperaemia, allowing the rises in blood flow necessary to supply the increased metabolic demand.
An accumulation of vasodilating metabolites also occurs during flow occlusion (e.g. caused by thrombosis). Release of occlusion then results in reactive hyperaemia; this is a large increase in blood flow that hastens the re-establishment of cellular energy stores.
This response is transient, persisting until levels of these metabolites fall back to normal.

Metabolic factors
Many factors contribute to metabolic vasodilatation. The most important factors are thought to be adenosine, K+ ions and hypercapnia (increased PCO2). Local hypoxia (reduced PO2) can also relax vascular smooth muscle cells, partly by opening adenosine triphosphate (ATP) sensitive K+ channels. Inorganic phosphate, hyperosmolarity and lactic acid may also act as metabolic vasodilators (not shown), although this is less well established.
Adenosine is a potent vasodilator that is released from the heart, skeletal muscles and brain during increased metabolism and hypoxia. It is thought to contribute to metabolic control of blood flow in these organs. Adenosine is produced when adenosine monophosphate (AMP), which accumulates as a result of increased ATP breakdown, is dephosphorylated by the cell membrane enzyme 5′-nucleotidase. It passes into the extracellular space, dilating neighbouring arterioles before being broken down to inosine by adenosine deaminase. It causes vasodilatation by acting on A2 receptors to increase cyclic AMP (cAMP) levels in vascular myocytes. Adenosine also has other actions in the body (e.g. inhibiting conduction in the atrioventricular node), some of which are mediated by A1 receptors (which lower cAMP).
Ischaemia or increased activation of muscles and nerves causes K+ ions to move out of cells. Resulting increases in the extracellular K+ concentration (up to 10–15 mmol/L) dilate arterioles, partly by stimulating the Na+–K+-ATPase, during functional hyperaemia in skeletal muscle and brain tissue. Hypercapnia associated with acidosis occurs in brain tissue during stimulation of local metabolism, and also during cerebral ischaemia (stroke). These are thought to provide a powerful vasodilating stimulus, both by releasing nitric oxide from endothelial cells, and by directly inhibiting Ca2+ influx into arteriolar cells.

Other local mechanisms
There are also a number of mechanisms acting locally in selected vascular beds under specific circumstances. For example, during the inflammatory reaction, local infection or trauma causes the release of various autocoids (local hormones), including the arteriolar dilators histamine, prostaglandin E2, bradykinin and platelet activating factor. These increase local blood flow and increase postcapillary venular permeability, thereby facilitating the access of leucocytes and antibodies to damaged and infected tissues. The generation of bradykinin by sweat glands during sweating promotes cutaneous vasodilatation. Prostaglandin I2 (PGI2, prostacyclin) is synthesized and released in the renal cortex under conditions where renal blood flow is reduced by vasoconstrictors. Prostacyclin has a vasodilating action that helps to maintain renal blood flow. Conversely, the release of serotonin (5-hydroxytryptamine) and thromboxane A2 from platelets during haemostasis causes vasospasm, which helps to reduce bleeding (see Chapter 7).