Regulation Of The Vasculature By The Endothelium


Regulation Of The Vasculature By The Endothelium
The entire vascular lumen is lined by a monolayer of endothelial cells which are crucial in regulating vascular tone. Endothelial cells can release both constricting and dilating substances when stimulated by blood-borne substances or by shear stress associated with the flow of blood (Figure 24). Important endothelial vasodilators include nitric oxide (termed endothelium-derived relaxing factor prior to its identification in 1987), prostacyclin (PGI2), and endothelium-derived hyperpolarizing factor (EDHF). The major endothelial vasoconstrictors are endothelin-1, thromboxane A2 (TXA2) and prostaglandin H2.


Endothelial cells also have a crucial role in suppressing platelet aggregation and thereby regulating haemostasis (see Chapter 7) and, as the major constituents of the capillary wall, control vascular permeability to many substances (see Chapter 21). 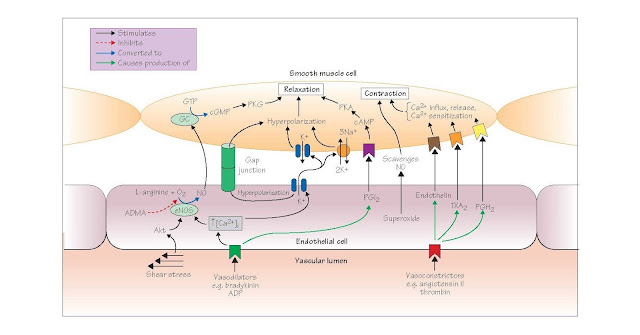 Nitric oxide
Nitric oxide (chemical formula NO) is the major vasodilator released by endothelial cells. NO is synthesized from the amino acid L-arginine and O2 by nitric oxide synthase (NOS). The most important form of NOS in the cardiovascular system is endothelial NOS (eNOS, also NOS-3), which is thought to be responsible for a continual basal production and release of NO by endothelial cells (also by platelets and the heart). eNOS is further activated by a variety of substances that act on their receptors to increase the endothelial cell intracellular Ca2+ [Ca2+]i, leading to raised levels of the Ca2+ – calmodulin complex which stimulates the enzyme. The rise in [Ca2+] endoplasmic reticulum, and is subsequently sustained at a lower but still elevated level by Ca2+ influx via store-operated Ca2+ channels (see Chapter 15). Substances that cause vasodilatation in this way include locally released factors such as bradykinin, adenine, adenosine nucleotides, histamine, serotonin and the neurotransmitter substance P. Acetylcholine has a similar effect, although this probably has little physiological importance in humans.
Shear forces exerted on the endothelium by the flow of blood also activate eNOS, and this contributes to both basal NO release and local regulation of bloodflow. This effect is not caused by a rise in [Ca2+]i, but by cellular pathways activated by shear forceinduced deformation of the endothelial cell cytoskeleton. One such pathway involves the sequential activation of the enzymes phosphatidylinositol 3-kinase (PI3K) and Akt, the latter of which stimulates eNOS via phosphorylation.
Once released from the endothelium, NO diffuses through the vascular wall and into the smooth muscle cells, where it activates the cytosolic enzyme guanylyl cyclase. This increases levels of cellular cyclic GMP, which causes relaxation as described in Chapter 15.
NO is a free radical (i.e. it contains an unpaired electron) and is therefore very reactive. In particular, upon its release NO reacts very rapidly with superoxide, another free radical which is continually being produced by a variety of enzymes (including eNOS) to form peroxynitrite, a substance that does not cause vasodilatation, and which in excess may damage cells. Because any given molecule of NO therefore survives for only a few seconds, the effects of NO are exerted locally and require its continued production.
Neuronal NOS (nNOS, also NOS-1) is expressed by multiple types of cells, including autonomic and sensory nerves, vascular smooth muscle and skeletal muscle fibres. Local release of NO by nNOS in the macula densa is important in regulating renal blood flow, and recent findings indicate that continual NO production by nNOS in arteries and/or skeletal muscle probably acts as a tonic vasodilating influence on arteries and arterioles throughout the body.
Inducible NOS (iNOS, also NOS-2) is expressed in macrophages, lymphocytes, vascular smooth muscle and other types of cells during inflammation. iNOS is capable of producing much greater amounts of NO and probably aids destruction of foreign organ- isms by the immune system. An overproduction of NO by iNOS in septic shock is thought to contribute to the severe hypotension characterizing this condition.
The formation of NO is competitively antagonized by drugs such as the non-selective NOS inhibitor L-nitro arginine methyl ester (L-NAME) and the selective nNOS blocker S-methyl-L- thiocitrulline (SMTC). These are useful experimental tools for evaluating the roles of NO in vitro and in vivo. Remarkably, an endogenous competitive inhibitor of eNOS called ADMA (asymmetric dimethyl arginine) is normally present in the plasma at a concentration of ∼1 µmol/L, and is formed by protein arginine methyltransferases, enzymes in the nucleus that attach methyl groups to arginine residues in proteins. Subsequent protein hydrolysis then releases ADMA. ADMA is metabolized by the ubiquitous enzyme dimethylarginine dimethylaminohydrolase, and is also excreted by the kidneys. Elevated plasma levels of ADMA are a cardiovascular risk factor, and occur in diabetes mellitus, hyperhomocysteinaemia and pre-eclampsia.

Other endothelium-derived relaxing mechanisms
Many of the factors that evoke endothelial NO production also stimulate the endothelial release of prostacyclin and EDHF. Prostacyclin promotes vasodilatation by increasing smooth muscle cell cyclic AMP levels, but its most important role is in limiting platelet attachment and aggregation.
EDHF was originally defined as a substance or substances released from the endothelium that cause(s) smooth muscle hyperpolarization (and therefore relaxation, see Chapter 15) by opening K+ channels and/or stimulating the activity of the Na+ pump, and is particularly important in causing dilatation of arterioles, where its influence may exceed that of NO. The EDHF response is now thought to occur because the rises in endothelial cell [Ca2+] that trigger NO and PGI2 synthesis also open Ca2+ activated K+ channels in these cells. This causes a hyperpolarization of the endothelial cells which is transmitted directly to the surrounding smooth muscle cells through myoendothelial gap junctions which connect these two types of cells and allow current to flow between them. The opening of endothelial cell K+ channels also raises the extracellular [K+] around the smooth muscle cells that are adjacent to the endothelium, and this further promotes smooth muscle cell hyper- polarization by activating both the Na+ pump and the inward rectifier (KIR), a type of K+ channel that has the unusual property of allowing a greater efflux of K+ when the extracellular [K+] increases. Hydrogen peroxide and epoxyeicosatrienoic acids, which are produced from arachidonic acid by the enzyme cytochrome P450, have also been proposed as EDHFs. However, recent work indicates that they both act in an autocrine manner on endothelial cells to promote rises in [Ca2+]i and therefore K+ efflux, thereby enhancing rather than causing the EDHF response.

Endothelium-derived constricting factors Endothelin-1 is a 21 amino acid peptide that is released from the endothelium by many vasoconstrictors, including angiotensin, vasopressin, thrombin and adrenaline. Endothelin is a potent vasoconstricting agent, particularly in veins and arterioles, and stimulates two subtypes of receptor on vascular smooth muscle cells, designated ETA and ETB Endothelin causes vasoconstriction via G-protein-linked mechanisms similar to those activated by noradrenaline. The infusion of endothelin receptor antagonists into humans causes a sustained fall in total peripheral resistance, implying that ongoing endothelin release contributes to maintaining the blood pressure.
Endothelial cells can also release other vasoconstricting substances, including prostanoids (thromboxane A2 and prostaglandin H2), and superoxide anions which may enhance constriction by breaking down NO. In addition, angiotensin-converting enzyme (ACE) present on the surface of endothelial cells converts is responsible for both the production of the vasoconstrictor angiotensin II (see Chapters 29 and 35) and the breakdown of the potent vasodilator bradykinin.

Endothelium in cardiovascular disease
Many diseases that disturb vascular function are associated with abnormalities of the endothelium. Dysfunction of the endothelium is thought to contribute to the early stages of atherosclerosis, while damage to the endothelium is a crucial factor leading to thrombus formation in the advanced atherosclerotic lesion (see Chapter 37). Plasma from patients with diabetes mellitus contains abnormally high levels of biochemical markers indicative of endothelial damage, and there is evidence, both in animal models of insulin- dependent diabetes and in patients with this disorder, for blunted endothelium-dependent relaxation. This deficit in endothelial function is thought to contribute to the increased risks of atherosclerosis, neuropathy and hypertension that are associated with diabetes. The mechanisms leading to diabetes-associated endothelial dysfunction remain incompletely defined, but may include damage by raised levels of glucose and/or oxidized low density lipoproteins.
Endothelial dysfunction may also be important in causing preeclampsia, a disorder of pregnancy characterized by hypertension and increased blood clotting, which is the leading cause of maternal mortality. The endothelium is thought to have an important role in causing the fall in maternal blood pressure that normally occurs during pregnancy. However, this protective function may be disrupted in patients with pre-eclampsia, possibly because of the release of substances from the placenta that damage the endothelial cells.