The Coronary, Cutaneous And Cerebral Circulations


The Coronary, Cutaneous And Cerebral Circulations
The vascular beds supplying the different organs of the body are structurally and functionally specialized, allowing an optimal matching of blood flow with their individual requirements. 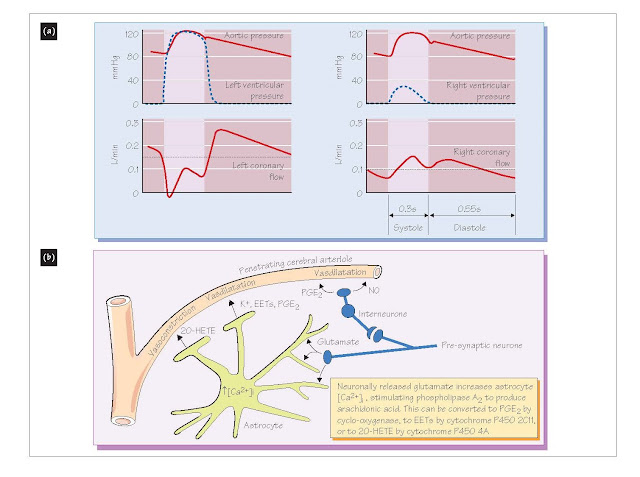 Coronary circulation
The anatomy of the coronary circulation is described in Chapter 2.
The high capillary density of the myocardium (∼1 capillary per muscle cell) allows it to extract an unusually large fraction (about 70%) of the oxygen from its blood supply. The resting blood flow to the heart is relatively high, and moreover increases approximately fivefold during strenuous exercise.
Figure 25a shows left and right coronary blood flow during the cardiac cycle at a resting heart rate (HR) of 70 beats/min. During systole, the branches of the left coronary artery that penetrate the myocardial wall to supply the subendocardium of the left ventricle are strongly compressed by the high pressure within the ventricle and its wall. Left coronary blood flow is therefore almost abolished during systole, so that 85% of flow occurs during diastole. Conversely, right coronary arterial flow rate is highest during systole, because the aortic pressure driving flow increases more during systole (from 80 to 120 mmHg) than the right ventricular pressure which opposes flow (from 0 to 25 mmHg).
With a HR of 70 beats/min, systole and diastole last 0.3 and 0.55 s, respectively. As the HR increases during exercise or excitement, however, the duration of diastole shortens more than that of systole. At 200 beats/min, for example, systole and diastole both last for 0.15 s. In order to cope with the greatly increased oxygen demand of the heart, which occurs simultaneously with a marked reduction in the time available for left coronary perfusion, the coronary arteries/arterioles dilate dramatically to allow for a pro- nounced rise in blood flow. The mechanism of this exercise hyperaemia in humans is unknown. However, in the porcine coronary circulation, which seems to be regulated in a manner similar to that of humans, coronary exercise hyperaemia is probably caused by reduction of endothelin release from the coronary endothelium, plus a sympathetically mediated β-receptor activation of coronary artery smooth muscle which results in a rise in cellular cyclic AMP(cAMP) and the opening of BKCa channels.

Cutaneous circulation
Apart from supplying the relatively modest metabolic requirements of the skin, the main function of the cutaneous vasculature is thermoregulation, the maintenance of a constant body temperature. Vascular tone in the skin is regulated by both neural reflexes and local cutaneous mechanisms that respond to temperature. Temperature increases cause cutaneous vasodilatation, allowing more blood to flow to the skin and radiate its heat to the environment to promote body cooling; decreases in temperature have the opposite effect.
Neural control of cutaneous vascular tone is exerted by two types of sympathetic nerves. A sympathetic vasoconstrictor system is tonically active under thermoneutral conditions. A fall in body temperature, sensed by peripheral and hypothalamic thermoreceptors, further activates this system, causing the release of noradrenaline which acts through α1 and α2 receptors to trigger cutaneous vasoconstriction. This minimizes the loss of body heat by producing a pronounced decrease in cutaneous blood flow, which can fall to one-tenth of its thermoneutral level of 10–20 mL/min/100 g. With increased temperatures, these nerves are inhibited and cutaneous blood vessels open, bringing blood to the skin to increase sweating and heat loss. These nerves innervate both glabrous skin (the skin of the hands, feet, lips, nose and ears) and non-glabrous skin. In glabrous skin, they control the constriction of arteriovenous anastomoses (AVAs) which are coiled, thick-walled thoroughfare blood vessels that connect arterioles and veins directly, bypassing the capillaries. When open, AVAs allow a high volume blood flow into a cutaneous venous plexus (network) from which heat can be radiated to the environment. Non-glabrous skin lacks AVAs.
A sympathetic vasodilator system, which innervates non-glabrous skin only, is inactive under thermoneutral or cool conditions. It becomes active when the core body temperature rises, and is responsible for ∼90% of the very large (up to 30-fold) increase in the flow of blood to the skin that can occur at high temperatures. Although these are cholinergic nerves, vasodilatation is probably caused by putative co-transmitters such as NO and sub- stance P rather than acetylcholine.
Local skin temperature also affects cutaneous blood vessels. Local heating causes cutaneous vasodilatation which is thought to depend on NO and also a local reflex involving sensory nerves. Local cooling induces cutaneous vasoconstriction. This is probably due to inhibition of NO release or effect, as well as an increased action of noradrenaline on vascular smooth muscle cell α2C receptors, more of which are inserted into the cell membrane as the temperature drops. However, prolonged cold causes a paradoxical vasodilatation. Cutaneous vessels are also constricted by the baroreceptor reflex, helping to increase total peripheral resistance (TPR) and shift blood to the vital organs during haemorrhage or shock. This involvement of the cutaneous vasculature in the baroreceptor reflex is particularly important at elevated body temperatures, when >50% of the cardiac output may be directed to the skin.

Cerebral circulation
The brain receives about 15% of cardiac output. The basilar and internal carotid arteries entering the cranium join to form an arterial ring, the circle of Willis, from which arise the anterior, middle and posterior cerebral arteries which supply the cranium. This arrangement helps to defend the cerebral blood supply, which if occluded causes immediate unconsciousness and irreversible tissue damage within minutes.
The brain, especially the neuronal grey matter, has a very high capillary density (∼3000–4000 capillaries/mm3) and blood flow. Coupled with a large (∼35%) fractional O2 extraction, this allows it to sustain the high rate of oxidative metabolism it requires to function. The arteriolar myogenic response is well developed, allowing cerebral blood flow to be maintained constant at arterial pressures between about 50 and 170 mmHg. CO2 concentrations in the surrounding brain are particularly important in causing vasodilatation (see Chapter 23). The effect of CO2 is in part caused by NO release from endothelial cells. Hyperventilation, which reduces arterial CO2, can cause a marked cerebral vasoconstriction and temporary unconsciousness. Sympathetic regulation of the blood flow to the brain exists, but is probably of minor importance.
Increased neuronal activity dilates local arterioles within seconds through several mechanisms (Figure 25b). Some neurones release transmitters such as NO, vasoactive intestinal peptide or prostaglandin E2 (PGE2), which are vasodilators. Neuronal activity also regulates intracerebral arterioles indirectly via effects on astrocytes. These are glial cells that have ‘endfeet’ that are in close contact with adjacent arterioles (in fact arterioles within the brain are almost completely encased in astrocytic endfeet). Astocytes also have multitudinous projections that surround and monitor the activity of >100 000 neuronal synapses and respond to increased activity in their synaptic ‘domain’ by raising their intracellular Ca2+ concentration. This is thought to cause them to release substances such as K+, PGE2 and epoxyeicosatrienoic acids (EETs) from their endfeet onto the arterioles, causing them to dilate. They may also be able to elicit vasoconstriction by releasing 20-hydroxyeicosatetraenoic acid (20-HETE). Astrocytes are coupled to each other electrically by gap junctions, forming a network that may act to spread the vasodilating ‘message’ upsteam so that the larger arteries feeding regions of increased neuronal activity also dilate.
The brain and spinal cord float in the cerebrospinal fluid (CSF), which is contained within the rigid cranium and the spinal canal. Because the cranium is rigid and its contents are incompressible, the volume of blood within the brain remains roughly constant, and increases in arterial inflow are compensated for by decreases in venous volume. By increasing the tissue mass, brain tumours increase the intracerebral pressure and reduce cerebral blood flow. Increased intracerebral pressure is partially compensated for by the Cushing reflex, a characteristic rise in arterial pressure associated with a reflex bradycardia.