Gonadotrophin Releasing Hormone: A Peptide Hormone
Clinical background
The therapeutic use of gonadotrophin-releasing hormone (GnRH) and its analogues is based on the discovery that pulsatile exposure of gonadotrophs to GnRH is required to maintain normal anterior pituitary function, whereas continuous GnRH secretion results in desensitization of the gonadotrophs and suppression of LH and FSH release. Thus GnRH or its analogues can be used in a pulsatile fashion to promote fertility in women with isolated GnRH deficiency or given continuously to suppress sex hormone secretion in patients with hormone-related cancers. Stable synthetic analogues of GnRH have been developed since GnRH, although used therapeutically as gonadorelin to assess pituitary function, is unstable and not satisfactory as a therapeutic agent. Stable analogues, including buserelin, goserelin, leuprorede, deslorelin and nafarelin, may be used to treat breast and prostate cancer, endometriosis, uterine fibroids and infertility. 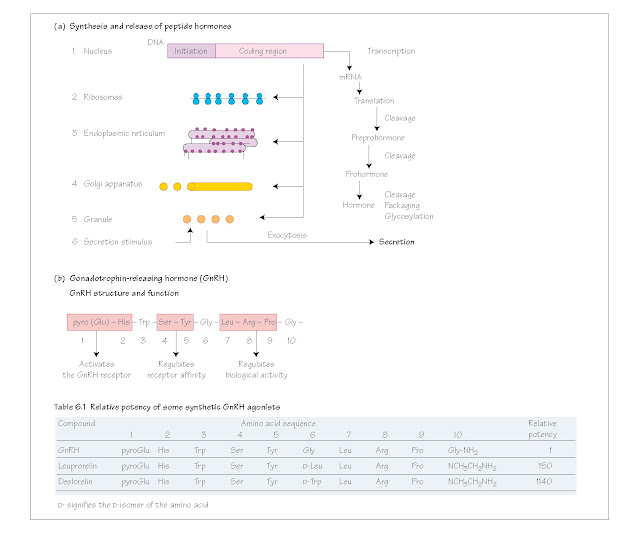 Introduction
Gonadotrophin-releasing hormone (GnRH) is an excellent example of a peptide hormone for study, since so much is known about its chemistry, production, release and actions. GnRH is an hypothalamic peptide which is released in pulsatile fashion into the hypothalamo-hypophyseal portal blood system which supplies the anterior pituitary gland. This pulsatile secretion maintains the function of the anterior pituitary gonadotrophs in releasing the gonadotrophins LH and FSH which are necessary for proper ovarian and testicular function. This knowledge has led to the development of synthetic GnRH analogues.

Synthesis and release of peptide hormones
Transcription. The first step in the synthesis of a peptide such as GnRH is the transcription of the gene coding for the hormone mRNA (Fig. 6a). An initiation site on the gene, upstream from the coding region, is activated by a signal from the cytoplasm of the hypothalamic neurone in which it is synthesized. In the case of GnRH, the signal originates from a neurotransmitter, perhaps dopamine, which triggers an increase in cytoplasmic cAMP, resulting in activation of the gene. Conversely, cAMP production may be inhibited as a result of the action of an opioid neurotransmitter.
Preprohormone. The GnRH mRNA is called prepro-GnRH mRNA, since it will be translated into a large precursor peptide called prepro-GnRH. The mRNA moves out of the nucleus to the cytoplasm, where it is translated by ribosomes on the endoplasmic reticulum into prepro-GnRH. This precursor peptide consists of a signal sequence of 23 amino acids, followed by the sequence of GnRH itself and then by the 56 amino acids forming the C-terminal portion of the peptide. This latter portion is termed GAP (GnRH-associated peptide), which has been discovered to be an inhibitor of prolactin secretion. This highlights the principle that more than one physiologically active peptide can be generated from a single peptide precursor. The signal peptide directs its transfer to the endoplasmic reticulum, and during this processing it is cleaved to form a shorter prohormone.
Cleavage and packaging. From this point, the prohormone is transferred to the Golgi apparatus, where it is cleaved further to form the final hormone, in this case the decapeptide GnRH. The hormone is packaged into storage vesicles and released on demand, in this case as a cellular response to neurotransmitter activity.
Exocytosis. The hormone is released from the cell through the process of exocytosis. On stimulation, intracellular free Ca2+ and cAMP rise, causing contraction of myofilaments, and the vesicle is guided along microtubules to the cell membrane. The vesicle fuses with the membrane through a process which requires Ca2+. The membrane is lysed and the contents are released into the extracellular space, and enter the bloodstream through neighbouring capillaries. GnRH neurone terminals impinge on the portal vessels, so that on release, a large proportion of exocytosed GnRH enters the portal system.

Structure-function studies
Once the structure of the hormone is elucidated, attempts are made to synthesize more stable analogues for therapeutic use, and, in the case of GnRH, substitution with D-amino acids produces potent analogues resistant to enzyme digestion (Fig. 6b; Table 6.1).
Receptor characterization. The stable analogues are radiolabelled and used to study the localization and properties of the peptide receptor. In the case of GnRH, these are situated on the plasma membrane of the anterior pituitary gonadotroph, and stimulation of the GnRH receptor by GnRH causes a rise in intracellular cAMP paralleled by the secretion of follicle-stimulating hormone (FSH) and luteinizing hormone (LH).
Hormone measurement. Once the hormone has been identified and synthesized in large quantities, antibodies can be raised against the hormone and used to measure it under different physiological and pathological conditions. In the case of GnRH, the availability of a radioimmunoassay enabled the discovery that the hormone is released episodically, approximately every 90 minutes. This episodic release is necessary to maintain gonadotrophin release, and thus fertility, in both the male and the female primate, including humans.