Principles Of Feedback Control
Clinical scenario
Glucocorticoid therapy is widely used to treat a variety of chronic inflammatory disorders. Mrs A.A. is a 69-year-old lady with long-standing rheumatoid arthritis. For the last 5 years she has taken oral prednisolone in a dose of 10 mg daily. She has developed some thinning of the skin and bruises easily, features which her doctor tells her are side-effects of the treatment. She knows that if she develops a minor illness she should increase the dose of her prednisolone for a couple of days and she carries a steroid card with her at all times (Fig. 7a). She also knows that if she starts vomiting for any reason she needs to seek urgent medical attention.


In the normal state, glucocorticoids are released in response to stress, such as illness. Therapeutic doses of glucocorticoids inhibit the normal hypothalamo pituitary adrenal feedback axis so that this stress response cannot occur. A patient such as Mrs A.A. relies entirely upon her fixed daily dose of prednisolone to supply her glucocorticoid requirements. If she develops a minor illness she needs to increase the dose of the tablets and if she is vomiting, needs to seek medical help so that glucocorticoids can be given intravenously. In the event that she stops taking glucocorticoids, she has to taper off the treatment gradually so as to allow the suppressed hypothalamo pituitary adrenal axis to recover normal function. 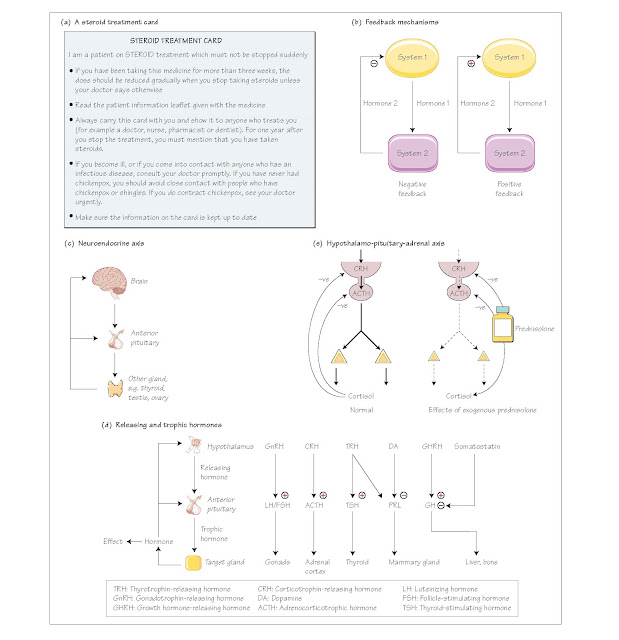 Homeostasis
Living systems possess their own internal environment, which has to survive within an external environment. Survival involves the maintenance of a fluid and salt balance, a tight control over temperature in the case of homoeotherms, and also over the regulation of chemical availability and utilization within the cell. Poikilotherms, for example some reptiles, whose temperature is set by the external environment, are more dependent on their external environment for maintenance of an adequate metabolism.
Internal control is achieved through integration of the different systems: neural, biochemical and physical. In all cases, the fundamental components of these systems are: (i) signals; (ii) transducers; (iii) sensors; and (iv) responders. The signals may be electrical impulses, or chemicals such as neurotransmitters, hormones or antigens. The transducers are poorly understood coupling systems which transform one form of energy into another, for example the conversion of an electrical impulse into a quantum of chemical neurotransmitter. Sensors are almost always receptors or enzymes or combined receptor– enzyme systems, which recognize specifically the signals which bind them. Transducers then convert the binding reaction into another electrical or chemical response. Responders are the apparatus of the cell that produce the final response, for example release or inhibition of hormone or neurotransmitter release, vasodilation, vasoconstriction or changes in heart rate.
Integration of endocrine systems is achieved through a complex interplay of regulatory feedback mechanisms operated through both hormonal and neural communication networks. The most important mechanisms are those commonly called feedback, whereby systems limit each other’s activity around a preset oscillator.
For example system 1 (Fig. 7b) releases a hormone, hormone 1, which causes system 2, another gland, to release another hormone, hormone 2, which travels in the bloodstream. It is sensed by system l, which somehow compares the concentration of the hormone with a comparator, and responds by altering the output of hormone 1. If system 1 responds by reducing the output of hormone 1, this is called a negative-feedback system. An example is the effect of thyroid hormone (hormone 2) from the thyroid gland (system 2), in reducing the output of thyroid- stimulating hormone (TSH; hormone 1) from the anterior pituitary gland (system 1; see Chapter 14).
If system 1 responds by increasing the output of hormone 1, this is called a positive-feedback system. An example is the effect of estrogen (hormone 2) from the ovary (system 2) on the release of luteinizing hormone (LH; hormone 1) from the anterior pituitary gland (system 1) just before ovulation (see Chapter 25).
In endocrinology, the brain–pituitary–target gland axes provide examples of feedback mechanisms in action (Fig. 7c). For virtually every anterior pituitary hormone, a corresponding hypothalamic releasing hormone has been discovered, and in some cases a corresponding inhibitory hypothalamic hormone has been found (Fig. 7d).
Feedback systems may involve more than two hormones, for example the control of thyroid hormone secretion. The brain releases thyrotrophin-releasing hormone, which travels down the portal blood system to the anterior pituitary thyrotroph cell, where it stimulates the release of TSH. TSH travels in the blood- stream to the thyroid gland, where it stimulates the release of T3 and T4. T3 in turn inhibits TRH and TSH release. It will be readily apparent that this sort of system provides a means of testing the proper functioning of the feedback systems in health and disease. One hypothalamic releasing hormone may release more than one anterior pituitary hormone. Gonadotrophin-releasing hormone (GnRH), releases both LH and FSH, which control gonadal steroidogenesis, ovarian follicular growth and ovulation in females and spermatogenesis in males.
Understanding basic feedback mechanisms is vital in clinical endocrinology where it forms the basis of diagnostic testing. For example the adrenal gland may develop a tumour which releases large amounts of cortisol. This feeds back to the brain and anterior pituitary gland suppressing the release of ACTH. In this case elevated serum cortisol levels in the presence of undetectable ACTH points to the adrenal as the source of the cortisol excess. If the diagnosis is a pituitary tumour secreting ACTH  and  therefore  excess  glucocorticoids,  serum  cortisol concentrations will be elevated in the presence of an inappropriately elevated ACTH concentration. Relatively large doses of glucocorticoids, for example prednisolone, prescribed for the patients with inflammatory or malignant diseases will also suppress the hypothalamo pituitary adrenal axis such that the patient switches off their endogenous cortisol production (see Clinical scenario; Fig. 7e). Ignorance of this feedback mechanism is potentially dangerous for the patient, whose stress response system is completely suppressed while on glucocorticoid therapy. This must be withdrawn gradually to allow the system to restore normal cortisol secretion.