Ureters: Position, Relations, Gross Structure
The ureters are paired muscular ducts that convey urine from the kidneys to the bladder. Each ureter begins medial to the ipsilateral kidney as a continuation of the renal pelvis and ends upon insertion into the posterior bladder wall. The ureters are retroperitoneal for their entire length, which is approximately 30 cm.


The ureters vary in diameter from 2 to 8 mm, increasing in size in the lower lumbar area. They are generally narrowest at their origin from the renal pelvis, at the crossing of the pelvic rim, and at their termination as they traverse the bladder wall. As a result, renal stones (see Plate 6-3) most often become impacted within or proximal to these three sites. 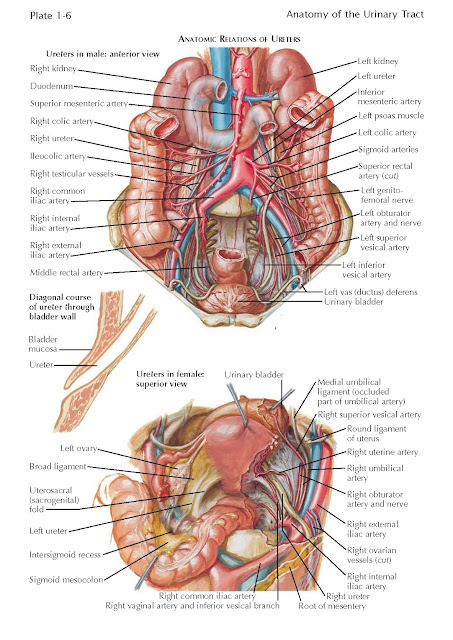 Pelvic Portion
The ureters enter the lesser pelvis anterior to the internal iliac arteries. As they descend along the posterolateral pelvic wall, they run medial to the obturator vessels/nerves and the superior vesical (umbilical) arteries. At the level of the ischial spines, the ureters turn medially alongside branches of the hypogastric bundle of nerves (see Plate 1-14). The other anatomic relation- ships in the pelvic region differ between the two genders.
Male. Just before the entering the bladder, each ureter passes inferior to the ipsilateral ductus (vas) deferens. At this point the ureters lie superior and anterior to the seminal glands (vesicles).
Female. As the ureters descend along the lateral walls of the lesser (true) pelvis, they course posterior and then parallel to the ovarian vessels contained in the suspensory ligaments of the ovary. The ureters pass medial to the origins of the uterine arteries from the internal iliac arteries. As the ureters turn anteromedially from the pelvic wall, they run anterior and parallel to the utero- sacral fold, posterior and inferior to the ovaries. As they traverse the base of the broad ligament, about 1.5 cm lateral to the uterine cervix, the ureters pass inferior to the uterine arteries as the arteries course medially toward the uterus.

Bladder Insertion
The ureters penetrate the thick wall of the bladder about 2.5 cm from the midline. They run in an anteromedial direction within the wall of the bladder and then terminate at the ureteric oriﬁces, which are 2 cm apart in the nondistended bladder. As intravesicular pressure increases, the intramural portions of the ureters become compressed, preventing reﬂux of urine. In this distended state, the ureteric oriﬁces spread to become 5 cm apart.