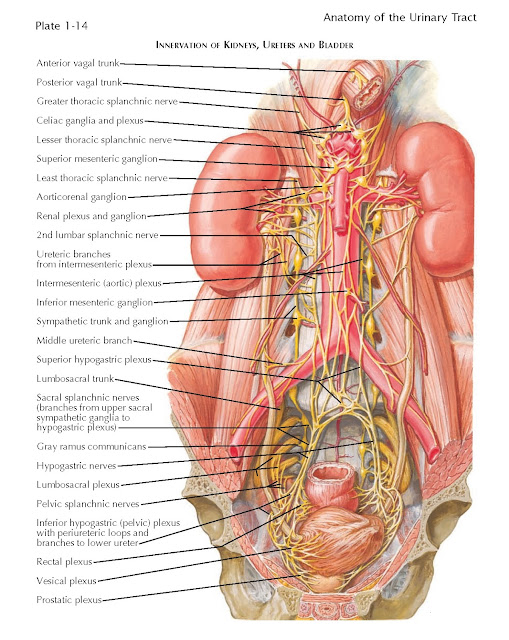 Sympathetic
Anatomy. Sympathetic innervation of the urinary system begins in the lower thoracic and upper lumbar (T10-L2 or 3) spinal cord segments, where neurons of the intermediolateral (IML) cell column give rise to presynaptic (preganglionic) sympathetic ﬁbers. These ﬁbers exit the CNS via the anterior roots of the corresponding spinal nerves, traverse the initial parts of those spinal nerves, then exit via white rami communicans to reach the sympathetic trunks.
Within the sympathetic trunks, some ﬁbers descend through the paravertebral ganglia to lower levels, but all of them leave the trunks, without synapsing, in visceral branches. These branches, also known as the abdominopelvic splanchnic nerves, extend from the medial aspects of the trunks. They include the lesser thoracic (T10-11), least thoracic (T12), lumbar, and possibly sacral splanchnic nerves. Together, these nerves convey presynaptic ﬁbers to the prevertebral ganglia, such as the celiac and aorticorenal ganglia, located near the major branches of the abdominal aorta. The presynaptic neurons synapse in these ganglia with postsynaptic neurons.
The pathway of sympathetic innervation to the kidneys and upper ureter (see Plate 1-15) begins in presynaptic ﬁbers originating in the T10-L1 levels of the IML. These ﬁbers travel through splanchnic nerves to synapse with neurons of the superior mesenteric ganglion, aorticorenal ganglia, and the small ganglia in the periarterial renal plexuses. Postsynaptic ﬁbers reach the kidney and upper ureter via periarterial plexuses and branches.
The pathway of sympathetic innervation to the remainder of the ureters and urinary bladder begins with presynaptic ﬁbers originating in the T12-L2(3) levels of the IML. These ﬁbers travel through lumbar (and possibly sacral) splanchnic nerves and then the intermesenteric (aortic) plexus, then synapse with neurons in the inferior mesenteric ganglion or small ganglia of the aortic/hypogastric plexuses. Postsynaptic ﬁbers descend into the pelvis via aortic, hypogastric, and pelvic (vesical) plexuses to reach the ureters and bladder.
Function. In the kidney, sympathetic tone has numerous effects on both the vasculature and renal tubules. Adrenergic receptors are located throughout the renal cortex and outer stripe of the outer zone of the renal medulla, with the greatest density in the juxtamedullary region of the inner cortex. Graded increases in renal sympathetic tone cause renin release from juxtaglo merular granular cells (see Plate 3-18), increase renal tubular sodium reabsorption, and decrease renal blood ﬂow (by constricting afferent arterioles). These combined effects can contribute to the development and maintenance of hypertension. In experimental animals, for example, renal denervation is known to prevent or ameliorate hypertension. Likewise, in patients with drug-resistant essential hypertension, catheter-based radiofrequency renal denervation results in substantial and sustained reductions in systemic blood pressure.
Some renal sympathetic nerve ﬁbers release dopamine, but there is no evidence that dopamine released during sympathetic stimulation affects renal function. Thus dopamine is not considered an endogenous neurotransmitter in the kidney. Likewise, despite the presence of acetylcholinesterase, renal sympathetic nerve stimulation is not affected by anticholinergic agents.
In the ureter, peristalsis is primarily myogenic in nature, driven by specialized pacemaker cells (see Plate 1-27). The efferent and afferent ﬁbers of the extrinsic plexus, however, do appear to be involved in regulating the pacemaker cells.
In the bladder, activation of adrenergic receptors causes relaxation of the detrusor muscle, which facilitates bladder expansion during ﬁlling. Meanwhile, activation of b adrenoceptors facilitates contraction of the trigone muscle. In males, trigonal muscle is circularly arranged to form an internal urethral sphincter, which prevents ejaculation into the bladder. As a result, stress may interfere with the ability to urinate by contracting this muscle. In females, in contrast, sphincteric arrangement of trigonal muscle is not evident. 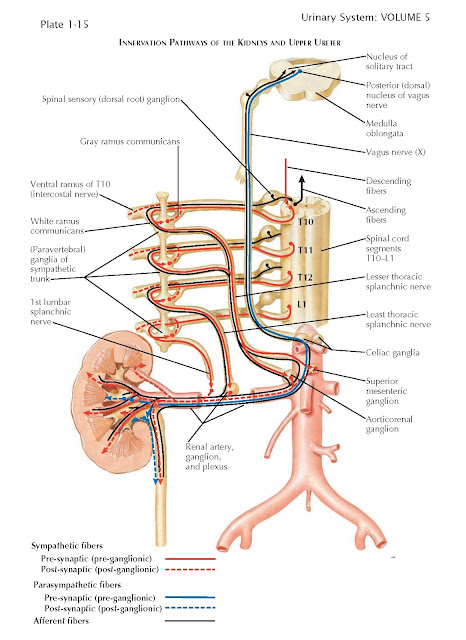 Parasympathetic
Anatomy. Parasympathetic innervation of the urinary system is derived from cranial and sacral sources. Both sources send presynaptic ﬁbers all the way to the target organ, where they synapse with intrinsic (intramural) postsynaptic neurons.
The cranial source, which innervates the kidneys and upper ureters, is the vagus nerve; it conveys presynaptic ﬁbers through the celiac and aorticorenal ganglia to the intrinsic renal and upper ureteric plexuses.
The sacral source, which innervates the remainder of the ureters and bladder, begins in the S2-S4 spinal cord segments, which contains neurons that give rise to presynaptic parasympathetic ﬁbers. These ﬁbers enter the initial portions of spinal nerves S2-S4 and then exit via pelvic splanchnic nerves, which convey them to the intrinsic plexuses of the ureters and bladder. Of note, the upper ureter may receive branches of these parasympathetic ﬁbers, even though its primary source of parasympathetic innervation is the vagus nerve.
Function. In the kidney, the role of vagal (cholinergic) function is unclear. In the ureter, parasympathetic stimulation probably modulates intrinsic pacemaker cells.
In the bladder, parasympathetic stimulation triggers contraction of the detrusor muscle and, by inhibiting sympathetic tone, also indirectly relaxes the trigonal muscle. In males, relaxation of the trigonal muscle includes relaxation of the internal urethral sphincter. The combination of detrusor contraction and sphincter relaxation enables micturition. 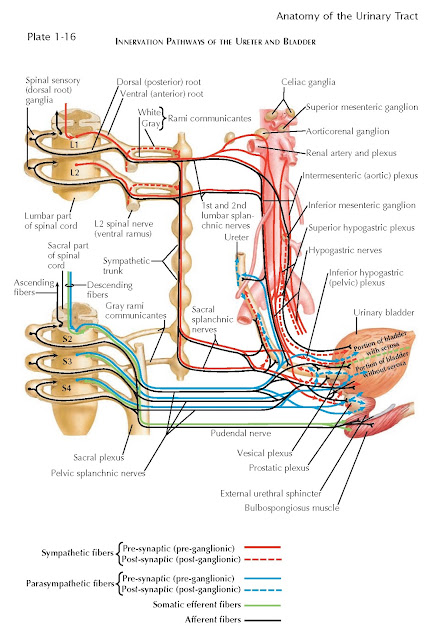 Afferent
Afferent innervation from the urinary system carries pain sensations and also plays a critical role in intrinsic reﬂexes. The pathways for pain sensation depend on whether the organ is invested with serosa. In those organs with serosa, such as the kidneys, abdominal ureters, and superior surface of the bladder, afferent pain ﬁbers follow the pathways of sympathetic innervation in a retrograde direction until they reach spinal sensory ganglia. Referred pain from these organs is experienced at the dermatomes corresponding to the levels where the presynaptic ﬁbers enter the sympathetic chain. The pain of pyelonephritis, or of an impacted stone in the renal pelvis or abdominal ureter, is experienced at levels T10-L1. The sensation of a distended bladder is experienced in T12-L2.
In contrast, afferent ﬁbers conveying pain from organs without serosa (i.e., subperitoneal viscera, such as the neck of the bladder, terminal ureters, prostate, cervix, and upper vagina), as well as ﬁbers involved in reﬂex arcs, generally follow the pathways of parasympathetic innervation in a retrograde direction until they reach cranial and sacral sensory ganglia. Thus, the visceral afferents conducting pain impulses from subperitoneal viscera have cell bodies located in the S2-S4 spinal sensory ganglia, with sensations perceived in the corresponding dermatomes. Mechanoreceptors and chemoreceptors that play a role in renorenal reﬂexes also send projections along vagal afferent ﬁbers to vagal sensory ganglia. Likewise, the reﬂexive emptying of a moderately distended bladde , such as occurs in infants, is transacted at sacral levels.