Overview Of The Nephron


Overview Of The Nephron
Eachkidney possesses an average of 600,000 to 1,400,000 tubular structures called nephrons, which contain a series of histologically distinct segments that alter the concentration and contents of urine. The major segments of each nephron are known as the glomerulus, proximal tubule, thin limb, distal tubule, and collecting duct. The proximal and distal tubules are both divided into convoluted and straight parts, while the thin limb is divided into descending and ascending parts.


The arrangement of these different nephron segments gives rise to the two grossly visible zones in the kidney, known as the cortex and medulla. The medulla is divided into an outer zone (which is further subdivided into outer and inner stripes) and an inner zone. The boundaries of these various regions are marked by the transition sites between different nephron segments, as described later. 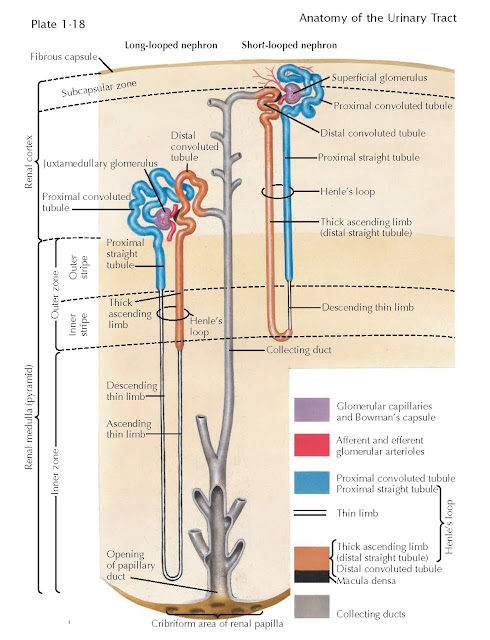 Distal Convoluted Tubule, Connecting Tubule, And Collecting Duct
The thick ascending limb, as described in the previous section, courses from the medulla toward the cortex, where it transitions to the distal convoluted tubule. Near this transition point is a specialized group of cells known as the macula densa, which make direct contact with the nephron’s parent glomerulus.
The distal convoluted tubule, like the proximal convoluted tubule, takes a very tortuous course within a small area of the cortex. It transitions to a short connecting segment (or tubule), which in turn leads to the collecting duct.
The collecting duct courses from the cortex toward the medulla adjacent to ducts from neighboring nephrons. In the inner zone of the medulla, these individual ducts join to form larger ducts. By a succession of several such junctions, the papillary ducts are formed, which arrive at the cribriform area of the papillae to drain urine into the minor calyces.