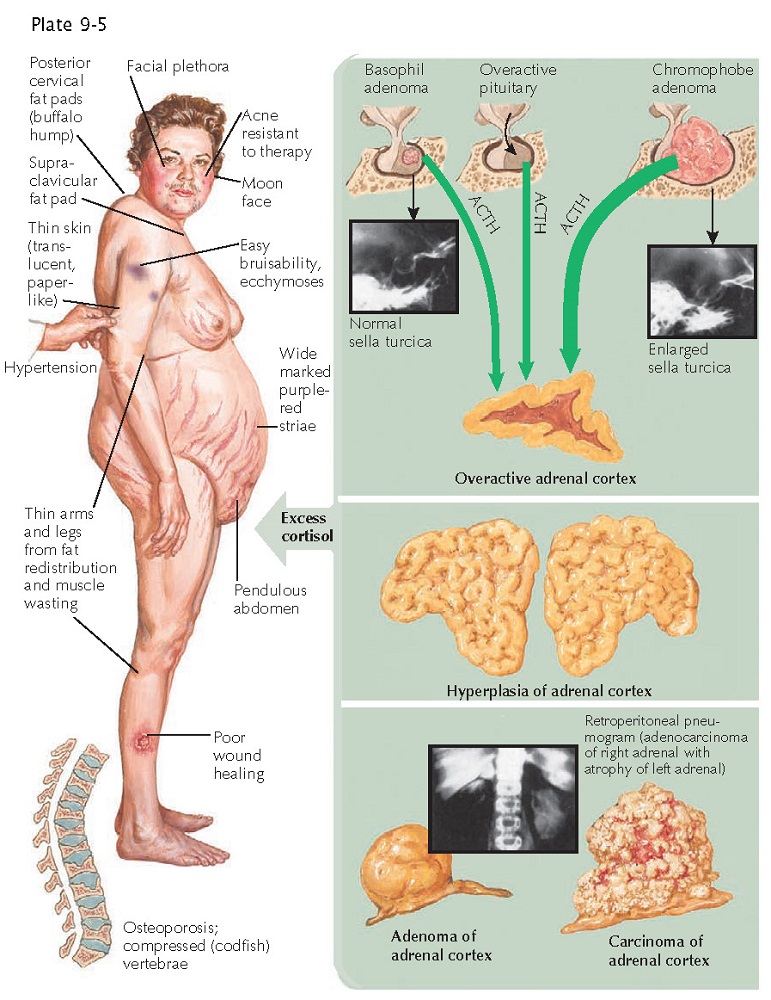 Cushing’s syndrome is caused by excessive secretion of endogenous glucocorticoids or, more frequently, by intake of excessive exogenous glucocorticoids. The latter type is typically iatrogenic in nature. The excessive glucocorticoid levels lead to the many cutaneous and systemic signs and symptoms of Cushing’s syndrome and Cushing’s disease. Endogenous glucocorticoids are made and secreted by the adrenal glands, and benign adrenal adenomas are the most frequently implicated adrenal tumors causing Cushing’s syndrome. Cushing’s disease is caused by excessive secretion from the anterior pituitary of adrenocorticotropic hormone (ACTH, corticotropin) as the result of a basophilic or chromophobe adenoma. The increased amount of ACTH causes the adrenal glands to hypertrophy and boost their production of cortisol, eventually leading to a state of hypercortisolism. Excessive release of corticotropin-releasing hormone (CRH) from the para- ventricular nucleus of the hypothalamus can also cause the syndrome. Any tumor that has the ability to produce ACTH also has the potential to cause Cushing’s syndrome. The most frequently reported such tumor is the small cell tumor of the lung, which is able to produce many neuroendocrine hormones including ACTH in large amounts.

Clinical Findings: Cushing’s disease is found more frequently in females than in males, and there is no race predilection. The most common age at onset of the disease is in the third to fourth decades of life. Cushing’s syndrome, especially the exogenous form, can be seen at any age, and ACTH-secreting tumors typically manifest in the sixth to eighth decades of life, particularly if caused by small cell lung cancer.

Cutaneous findings in Cushing’s syndrome and Cushing’s disease are almost identical. The excessive cortisol levels affect the skin, including the underlying subcutaneous adipose tissue. Patients have an insidious onset of fat redistribution. This leads to thinning of the arms and legs and deposition of adipose tissue in the abdomen and posterior cervical fat pad (“buffalo hump”). The fat redistribution also causes the face to have a full appearance (“moon facies”). Supraclavicular fat pads are frequently appreciated on physical examination. Large, thick, purple-red striae are seen along the areas of fat redistribution on the abdomen and buttocks, as well as on the breasts in female patients. Striae are caused by an increase in fat and an increase in the catabolism of dermal elastic tissue. The catabolic effect of cortisol causes muscle wasting and the appearance of further thinning of the limbs. This also leads to weak- ness and easy fatigability. Cortisol directly causes thinning of the skin to the point that it appears translucent and almost paper-like. This thinning of the skin may impart a redness to the face (facial plethora) and other regions as the underlying vasculature becomes more noticeable. The skin is easily torn or bruised and shows poor wound healing ability.

Cortisol decreases elastic tissue within the cutaneous vasculature, leading to easy and exaggerated bruisability and prominent ecchymoses. The excessive cortisol may also lead to increases in acne papules, pustules, and nodules; in some cases, this is quite severe, with cysts, nodules, and scarring. A rare cutaneous finding is excessive facial lanugo hair. In Cushing’s disease, the excessive production of ACTH is associated with an increase in the production of melanocyte-stimulating hormone (MSH) and subsequent hyperpigmentation. This is not seen in untreated Cushing’s syndrome.

Cushing’s syndrome and Cushing’s disease also manifest systemically with myriad symptoms. Excessive cortisol may lead to mood changes including depression, mania, and psychosis. Hypertension is common, and elevated blood sugar levels may occur and can be difficult to control. The skeletal system is always affected, and osteoporosis occurs early in the course of the disease; left untreated, this can lead to vertebral compression fractures and other bony fractures (e.g., femoral neck).

Treatment: Cushing’s syndrome of exogenous origin requires removal of the responsible agent. In most cases, this is difficult, because these patients often require the life-saving exogenous corticosteroids (e.g., after transplantation). In such cases, the practitioner should decrease the dose to the minimum possible or try to change to a different immunosuppressant. Cushing’s syndrome caused by adrenal adenoma or bilateral adrenal hyperplasia requires surgical removal. After removal of both adrenal glands, the patient will need replacement therapy. If the syndrome is caused by abnormal secretion of ACTH from a malignant tumor such as a small cell carcinoma of the lung, the patient is best served by treating the underlying tumor. Cushing’s disease is best treated by neurosurgical removal of the tumor, with consideration of postoperative radiotherapy.