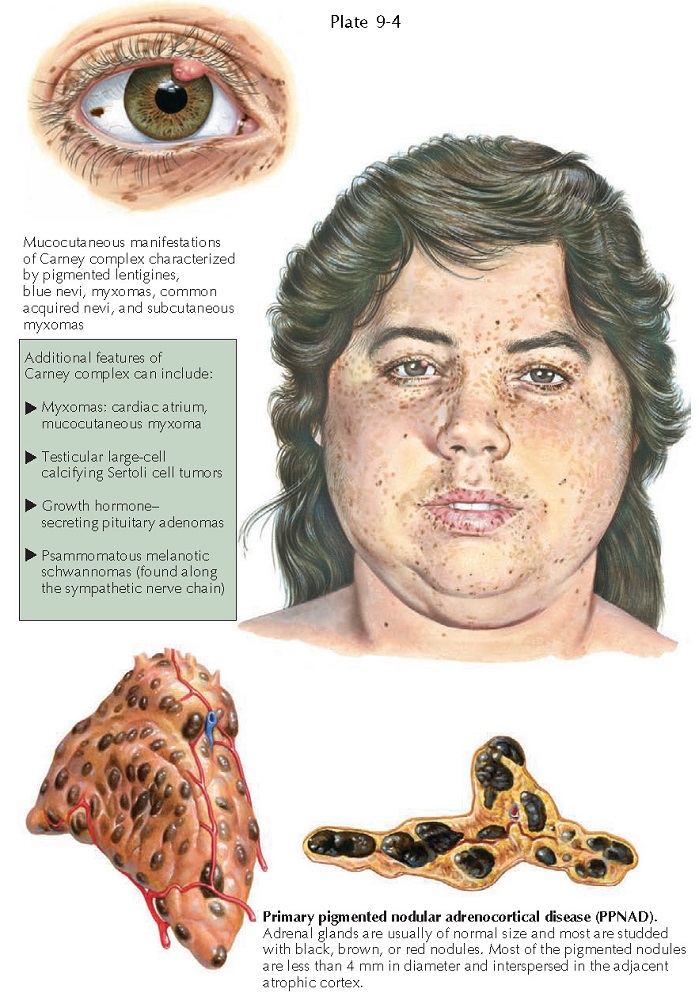 Carney complex, also known as NAME syndrome (nevi, atrial myxomas, myxoid neurofibromas, ephelides) or LAMB syndrome (lentigines, atrial myxomas, mucocutaneous myxomas, blue nevi), is an autosomal dominantly inherited disorder that affects the integumentary, endocrine, cardiovascular, and central nervous systems. This rare disorder is primarily caused by a genetic mutation in the tumor suppressor gene, PRKAR1A. Approximately 20% of patients have defects in an undescribed gene located at 2p16. Various genotypes and phenotypes exist, and the diagnosis is based on a complex list of major, supplemental, and minor criteria.

Clinical Findings: The phenotypic expression of the disease is variable, and research has shown the phenotype to be related to the underlying genotype of the disease. Cutaneous findings are often the first signs of the disease, and they are typically noticed in the first few months of life. Five prominent skin effects can be seen in isolation or, more commonly, in conjunction with one another. Multiple lentigines and common acquired nevi are the two most frequent skin findings. Multiple blue nevi are also seen. The blue nevi, lentigines, and nevi tend to group together on the head and neck region, lips, and sclerae. Mucocutaneous myxomas may be found at any location and appear as flesh- colored to slightly translucent, pedunculated papules that are soft and easily compressed. They vary widely in number, from a few to hundreds. Subcutaneous myxomas are often found on the margin of the tarsal plate and can have a slightly pink-red to somewhat translucent appearance. They are not as soft to the touch as the mucocutaneous myxomas. Ephelides are also found in abundance, primarily in the head and neck region.

Cardiac myxomas are the leading cause of morbidity and mortality, and each patient diagnosed with Carney complex needs routine echocardiography and follow- up with cardiology. Male patients should be screened for testicular tumors with physical and ultrasound evaluations. Pituitary adenomas may lead to a growth hormone–producing adenoma and subsequent evidence of acromegaly. Cushing’s syndrome may result from excessive cortisol production by the adrenal glands. This is a multisystem disorder with great variation in potential organ system involvement. Carney complex is best treated and monitored with a multidisciplinary approach.

Pathogenesis: The PRKAR1A gene encodes a regulatory subunit of a protein kinase A. Protein kinase A belongs to a family of regulatory proteins that are dependent on cyclic adenosine monophosphate (cAMP) for proper functioning. Many different mutations in PRKAR1A have been discovered, including missense, frame-shift, and nonsense mutations, all leading to defects in the encoded protein. Because of the many unique mutations in this gene, researchers have been able to show that the type of genetic mutation correlates with the phenotype of the disease. As an example, mutations in the exon portions of the gene (compared with the intron portions) are much more likely to clinically express lentigines and cardiac myxomas.

Histology: Skin biopsies by themselves are not diagnostic, and the lentigines, myxomas, and blue nevi found in patients with this syndrome are not different histologically than those found outside the Carney complex. Testicular tumors usually show a Leydig cell or Sertoli cell tumor with various amounts of calcification. Histological findings on biopsy of the adrenal gland characteristically show varying amounts of nodular pigmented regions; this has been termed primary pigmented nodular adrenocortical disease (PPNAD). Adrenal disease may lead to increased production of cortisol and ultimately to the signs and symptoms of Cushing’s syndrome. A unique tumor, almost always seen in conjunction with Carney complex, is the psammomatous melanotic schwannoma. These are not cutaneous tumors but are most likely to be found along the paraspinal sympathetic chain.

Treatment: Therapy for skin myxomas includes observation or excision of individual lesions. Lentigines and blue nevi can be removed for cosmetic purposes. Atrial myxomas are the leading cause of morbidity and mortality, and they require removal by cardiothoracic surgery. Patients need to be monitored by cardiology and endocrinology specialists for their entire lifetime. Routine screening evaluations of the heart, pituitary, adrenal gland, and testicles must be performed.