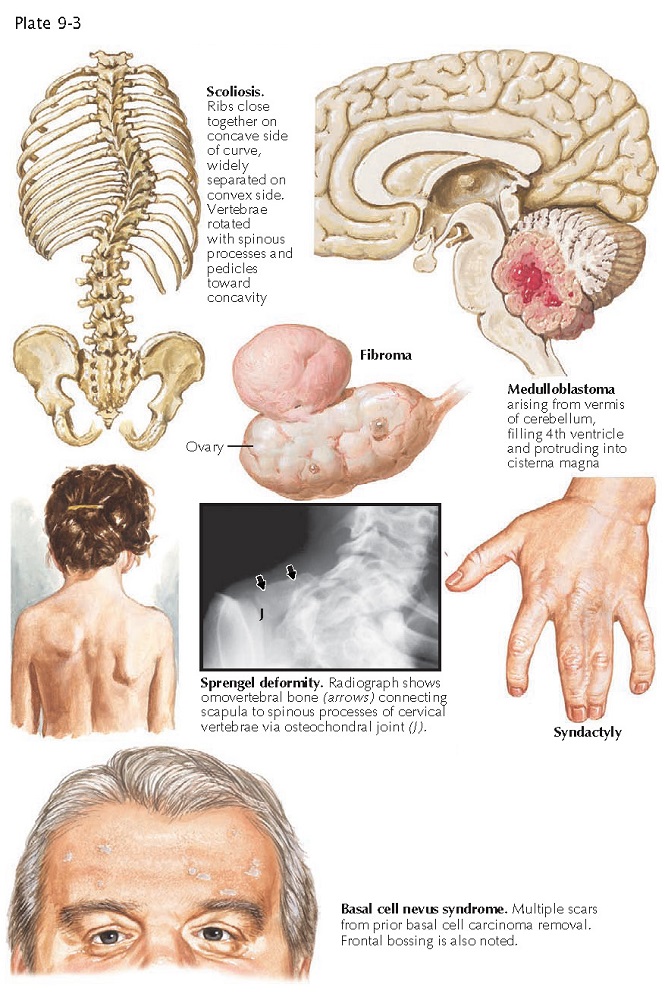 Basal cell nevus syndrome (BCNS), also known as nevoid basal cell carcinoma syndrome or Gorlin syndrome, is an uncommon autosomal dominant genodermatosis caused by mutations in the patched-1 (PTCH1) gene on chromosome 9. Approximately 40% of cases represent new, spontaneous mutations. Affected individuals are predisposed to the development of multiple basal cell carcinomas (BCCs), often in the hundreds over their lifetime. The diagnosis of this syndrome is based on a number of established criteria.

Clinical Findings: The incidence of BCNS is estimated to be 1 in 100,000 persons, and there is no race or sex predilection. It is inherited in an autosomal dominant fashion. Often, the first symptoms are painful keratogenic (odontogenic) jaw cysts. The early onset of BCCs often occurs before the age of 20 years.

Four of five BCNS patients have odontogenic jaw cysts on dental examination or dental radiographs. In children, the BCCs have been shown to mimic skin tags. Because skin tags are highly unusual in children, one should biopsy any skin tags seen in a young child to evaluate for BCC. About 90% of affected individuals show evidence of palmar pitting. This represents abnormal keratinization of the palmar skin. The lesions manifest as small (1-2 mm), pink to red, shallow defects in the glabrous skin of the palms or soles.

Diagnosis of BCNS is based on fulfillment of well-developed criteria. Two major criteria or one major and two minor criteria must be met to make the diagnosis. The six major criteria are (1) more than two BCCs; (2) palmar and plantar pitting; (3) odontogenic jaw cysts; (4) abnormalities of the ribs, including bifid or splayed ribs; (5) calcification of the falx cerebri; and (6) first-degree relative diagnosed with BCNS. The minor criteria are (1) congenital malformations (frontal bossing, hypertelorism, cleft palate, coloboma); (2) ovarian or cardiac fibromas; (3) macrocephaly; (4) skeletal abnor-malities (scoliosis, syndactyly, Sprengel deformity of the scapula, pectus deformity); (5) medulloblastoma; and (6) other radiological abnormalities, including phalangeal lucencies in a flame shape and vertebral fusion.

Pathogenesis: BCNS is caused by to a defect in the PTCH1 gene on the long arm of chromosome 9. This gene is responsible for encoding the sonic hedgehog receptor protein that is found on many cell membranes. In normal physiological states, the transmembrane protein encoded by PTCH1 binds to the smoothened protein, turning off downstream cell signaling and ultimately decreasing cell proliferation. When the gene is mutated or when excessive sonic hedgehog protein is present, inhibition of the smoothened protein is removed, leading to uncontrolled cell signaling and a dramatically increased risk of cancer. Patients with BCNS are more sensitive to damage from ultraviolet light and radiation than normal controls.

Histology: BCC in the BCNS syndrome is histologically the same as any other BCC, and there are no distinguishing factors.

Treatment: BCCs tend to be multiple. Routine skin examinations and prompt removal of basal cell skin cancers help decrease the size of scarring and disfigurement resulting from surgery. All patients need to be educated at an early age on avoiding excessive sun exposure, tanning, and unnecessary radiation exposure from medical testing, because all of these increase the likelihood of BCC development. Many ongoing research protocols are looking at oral agents to decrease the abnormal hedgehog signaling pathway; such studies may lead to medical options for these patients in the future. Jaw cysts are best removed surgically to relieve pain and discomfort. Medulloblastoma is a serious, life-threatening tumor most commonly seen in early childhood, before the age of years. Surgical and chemotherapeutic options exist.