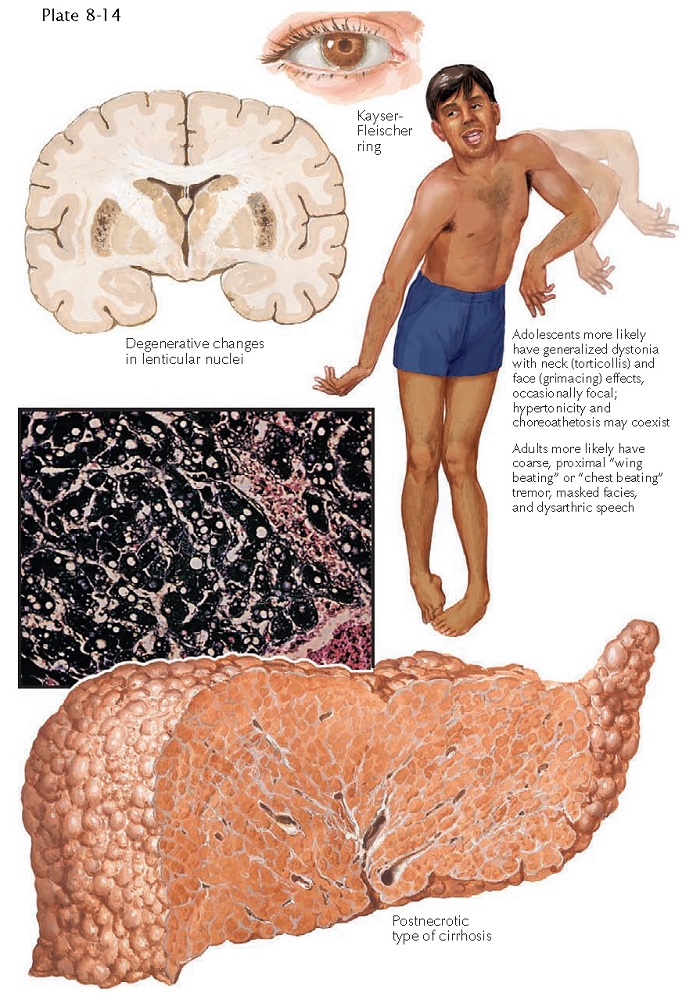 Wilson’s disease, also known as hepatolenticular degeneration, is a disorder caused by a defect in copper metabolism. The disease is rare, with a worldwide incidence of approximately 1 in 18,000. It is an autosomal recessive condition that is caused by a defect in the ATP7B gene, which is located on the long arm of chromosome 13. The product of this gene is responsible for the proper transport of copper. The main clinical findings relate to nervous system involvement and liver disease. Wilson’s disease has a variable phenotype depending on the specific genetic mutation. Cutaneous disease and ophthalmological disease are frequently seen.

Clinical Findings: Wilson’s disease equally affects males and females, and its incidence varies among populations. The usual age at onset is in the first 2 decades of life. Liver disease and central nervous system (CNS) disease are often the first signs. Patients may present with unexplained hepatomegaly, cirrhosis, and end- stage liver disease. The CNS findings can manifest in various patterns. Mild to severe psychiatric symptoms of depression and mood lability are common; the manifestations in some patients may approach the diagnosis of schizophrenia. Impaired cognition and memory are frequently seen and may lead to early dementia. Extra- pyramidal features are always present and include tremor and rigidity. The tremor has been described as a “wing-beating” tremor of the shoulder girdle. Bradykinesia is invariably a part of the disease. Ataxia and chorea, along with dysfunction of normal motor coordination, are evident as time progresses.

The cutaneous findings, when present in conjunction with liver and CNS disease, can make the diagnosis. Patients have varying amounts of pretibial hyperpigmentation, the cause of which is poorly understood. Rarely, patients present with a blue discoloration to the lunula of the nail. The most pathognomonic sign is the presence of Kayser-Fleischer rings on the cornea. A Kayser-Fleischer ring is a yellow to orange-brown ring around the iris. It represents an abnormal accumulation of copper in Descemet’s membrane of the cornea. A slit-lamp examination is required to appreciate this clinical finding, which is unique to Wilson’s disease.

Laboratory testing is required to confirm the diagnosis. A hallmark is a decreased ceruloplasmin level. The actual ceruloplasmin protein is not defective in any manner. Urinary copper excretion is elevated to more than 100 µg/day.

Pathogenesis: The ATP7B gene is mutated in Wil- son’s disease, and this leads to the systemic and cutaneous manifestations of the disease. The ATP7B gene encodes the P-type adenosine triphosphatase (ATPase) that serves as a metal-binding and metal-carrying protein. This P-type ATPase is primarily responsible for the transport of copper. When it is defective, copper builds up to abnormal levels in the liver, in the CNS, and to a lesser extent, in the cornea. Many different mutations have been discovered in the ATP7B gene and are responsible for the different phenotypes seen. Homozygous patients and compound heterozygotes have completely different phenotypes with some over- lapping features. Certain mutations lead to liver and CNS disease or to a predominance of one over the other. The large number of mutations and the large size of the gene make it difficult to analyze. The prevalence of the different genetic mutations varies among populations.

Histology: Skin biopsies are not helpful in the diagnosis. Biopsies of the liver show varying degrees of portal inflammation and fibrosis with eventual cirrhosis. Hydropic degeneration of individual hepatocytes is seen to a varying degree, depending on the timing of the biopsy. Special staining methods can highlight the elevated copper within the hepatocytes.

Treatment: The only cure for the disease is liver transplantation. This procedure is becoming more common and has led to excellent therapeutic responses. The transplanted normal liver produces adequate levels of the P-type ATPase to bring the copper levels to normal. CNS symptoms, if present at the time of trans- plantation, typically persist with minimal improvement over time. While awaiting liver transplantation, patients are usually treated with a combination of a low-copper diet, oral zinc supplementation, and D-penicillamine. Zinc competes with copper for absorption and decreases the amount of copper absorbed from the gastrointestinal tract. D-Penicillamine is a copper-chelating agent that helps to lower serum and tissue copper levels.