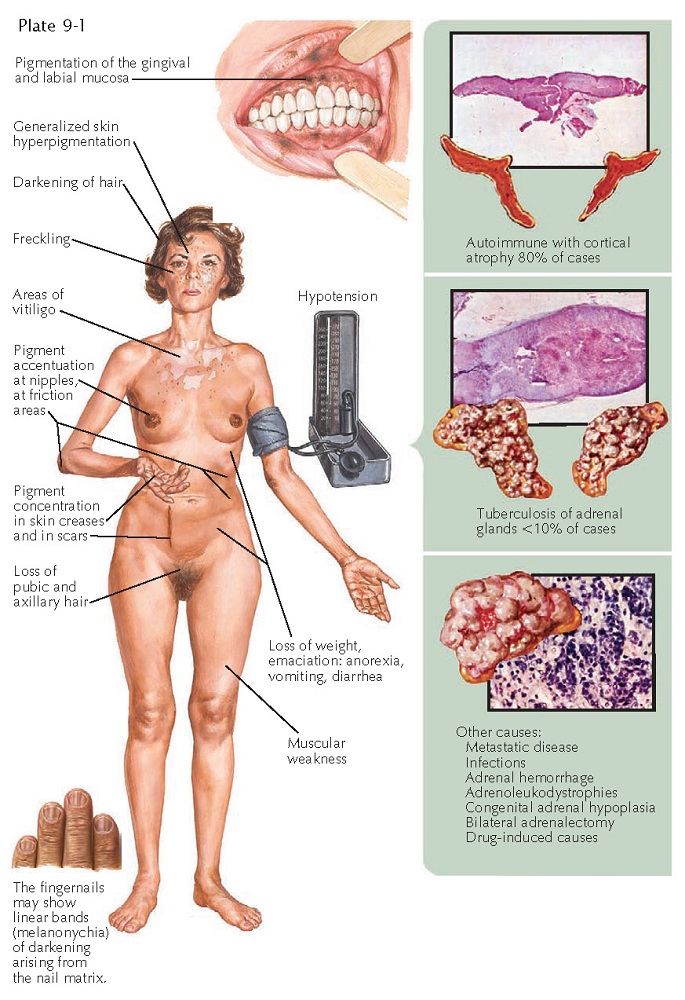 Clinical Findings: Males and females are equally affected. The first symptoms are lethargy and generalized malaise. These symptoms may not be apparent until the affected patient undergoes a major stressful event, such as infection, which can lead to a prolonged disease course and a prolonged convalescence. Patients have excessive nervousness and may show emotional lability superimposed on periods of depression. Fatigue and weakness can be severe, to the point where even speaking causes fatigue. Weight loss and evidence of dehydration are present in most cases. Hypotension is frequently seen, and a small heart shadow is seen on chest radiography.

Cutaneous effects are always found in chronic primary adrenal insufficiency. Pigmentation is seen in many regions of the body and appears to occur in areas of friction, such as along the waist line and on elbows and knees. This is typically a generalized “bronze pigmentation,” but it is accentuated in the groin, nipples, and scrotum. The palmar and plantar creases are accentuated. Hyperpigmentation may be prominent within previous scars. Vitiligo may be present in conjunction with autoimmune adrenal insufficiency. Increased pigmentation of hair is seen, but this may be subtle and may occur slowly. Pigmentary alterations of the gingival and labial mucosa may also be seen. Pigmentary anomalies are not seen in secondary adrenal insufficiency, which is caused by pituitary deficiency.

Body hair is dramatically decreased, with near loss of axillary and pubic hair. The hair loss is more pronounced in females, because males still produce androgens, primarily in the unaffected testes. Serum testing shows hyperkalemia and hyponatremia, with a low cortisol level. The diagnosis is confirmed by intravenously injecting a synthetic corticotropin and evaluating the adrenal gland’s response by measuring cortisol levels after the injection. In patients with Addison’s disease, the serum cortisol level is not increased by stimulation testing.

Histology: Skin biopsies are not helpful in making the diagnosis and are rarely performed. A normal number of melanocytes are present, with an increased amount of melanin pigment in the epidermis.

Pathogenesis: The adrenal glands are responsible for making cortisol, aldosterone, and the 17-ketosteroiods. When the adrenal glands no longer are able to produce these molecules, Addison’s disease sets in. In the presence of low circulating levels of cortisol, the pituitary responds by increasing production of adrenocorticotrophic hormone (ACTH, corticotropin) and melanocyte-stimulating hormone (MSH). ACTH and MSH are derived from the same precursor protein, pro-opiomelanocortin (POMC). The pigmentary anomalies seen in Addison’s disease are directly related to increased release of MSH. The increase in MSH causes pigment production by melanocytes in skin, hair, and mucous membranes. Pubic and axillary hair loss is related to the lack of 17-ketosteroids, whereas hypotension is caused by the lack of aldosterone. The lack of aldosterone causes a decreased blood volume and decreased serum sodium. The lack of cortisol production is responsible for weakness, fatigue, weight loss, and decreased mentation.

Addison’s disease is seen frequently in association with other autoimmune endocrine disorders such as diabetes and autoimmune thyroiditis.