FIBROUS PAPULE
Fibrous papules are one of the most common benign skin growths encountered. They are often overlooked or ignored during routine skin examinations. The exact incidence is unknown, but they are believed to be extraordinarily common. These skin growths are most frequently found on the nose, but they can occur any-where, especially on the face. 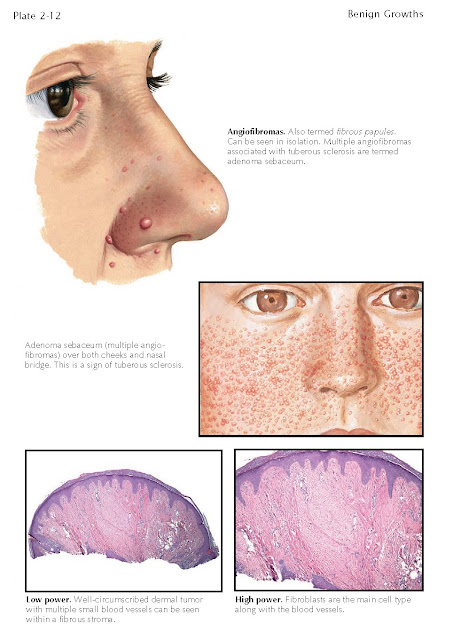 Clinical Findings: Fibrous papules are typically small, 0.5 to 5 mm in diameter. They are slightly oval and dome shaped with an overlying smooth surface. Most commonly, they are flesh colored to slightly hyperpigmented. Fibrous papules can also have a hypopigmented appearance. These benign tumors are almost entirely asymptomatic. On occasion, a patient notices a slight itching sensation; less frequently, a patient may describe spontaneous bleeding or bleeding after minor trauma. These growths are most often solitary in nature, but multiple fibrous papules have been reported. Fibrous papules most commonly occur in young adults, especially in the third to fifth decades of life. The most common location is the face, with the nose and chin the two areas most commonly involved. Fibrous papules are considered to be angiofibromas. Multiple angiofibromas can be part of a constellation known as the tuberous sclerosis syndrome. The differential diagnosis in a teenager with multiple angiofibromas should always include tuberous sclerosis. However, solitary fibrous papules are extraordinarily common and should not cause one to look for an underlying syndrome such as tuberous sclerosis. Pearly penile papules are small, dome-shaped, 1- to 2-mm papules found along the corona of the glans. These pearly penile papules are histologically indistinguishable from fibrous papules and are also considered to be angiofibromas.
The differential diagnosis of a fibrous papule can be quite broad, and a biopsy is often required to differentiate the potential mimickers. The entities most commonly included in the differential diagnosis are common acquired melanocytic nevus and basal cell carcinoma. In these cases, a shave biopsy is required to make a firm diagnosis.

Histology: A fibrous papule is considered to be an angiofibroma. There are multiple histological variants of fibrous papules. The most commonly encountered fibrous papules are typically dome shaped and small (up to 5 mm in diameter), and they show a proliferation of fibroblasts with a stroma of fibrotic collagenized material. Dilated blood vessels are often found within the papules. An inflammatory infiltrate is frequently seen, but it is typically sparse. The combination of clinical findings with the typical histopathological findings solidifies the diagnosis.
Multiple histological variants have been described, including pleomorphic, pigmented, granular cell, hypercellular, and clear cell variants. These variants are believed to be much less common than the classic type of fibrous papule. They have been described in detail and are well accepted and recognized histopathological variations.

Pathogenesis: Fibrous papules are believed to be a benign proliferation of fibroblasts and blood vessels in a collagen-filled stroma. Immunohistochemical staining has shown that the dermal dendrocyte is the most likely precursor cell to the abnormal fibroblasts seen in fibrous papules. The underlying cause has yet to be determined. The multiple angiofibromas of tuberous sclerosis are directly related to an underlying defect in the tumor suppressor gene, tuburin ( TSC2). Patients with tuberous sclerosis also have angiofibromas in a periungual location, as well as hundreds to thousands of angiofibromas located symmetrically on the face and nose.

Treatment: No treatment is necessary, although a small shave biopsy is often all that is required to remove the fibrous papule with an excellent cosmetic result. Most fibrous papules are removed because they are mistaken for basal cell carcinomas or for relief of s me underlying irritation, such as itching or bleeding.