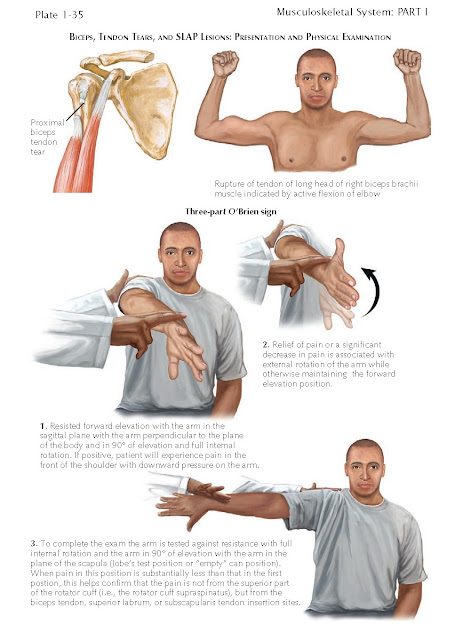 When a tenodesis is performed for management of an acute rupture, the repair is more often performed by open surgery through a small deltopectoral or subpectoral incision. In cases in which a biceps or superior labrum pathologic process involving the biceps is found at the time of surgery for an isolated biceps pathologic process or when it is associated with rotator cuff pathology in an older or more sedentary patient, the long head of the biceps tendon is released at the site of its origin and allowed to retract without repair. Although this will result in a “Popeye” deformity, the patient is most often asymptomatic and the pain that was preoperatively associated with the long head of the biceps is relieved. The biceps tendon is attached to the superior labrum both anteriorly and posteriorly. Type I SLAP lesions are common and often associated with the normal aging process and as such are not often associated with sig- nificant pathology or symptoms. Similarly, when type II lesions are typically seen in the older age population they are often asymptomatic. Type II SLAP lesions can be symptomatic when they are acute and traumatic. They are often seen after a fall onto an outstretched arm or in the overhead-throwing athlete as related to repetitive trauma and may warrant a surgical repair. Type III lesions involve a bucket-handle tear of the labrum with mechanical symptoms without biceps tendon involvement and are amenable to surgical treat- ment specifically to remove that portion of the labrum that is detached. Type IV SLAP lesions involve both the superior labrum and the long head of the biceps tendon. These lesions are often symptomatic and are generally treated by removal of the labral tissue and with tenodesis of the biceps. Alternatively, the biceps tendon and type IV SLAP lesion can be repaired if tendon quality is good and the lesion is relatively small. Less common types of SLAP lesions are associated with tears extending into the anterior inferior labrum (Bankart-type labrum tears) and are associated with glenohumeral instability. In these cases, when symptomatic, both lesions are repaired at the time of surgery, most commonly with arthroscopic techniques. 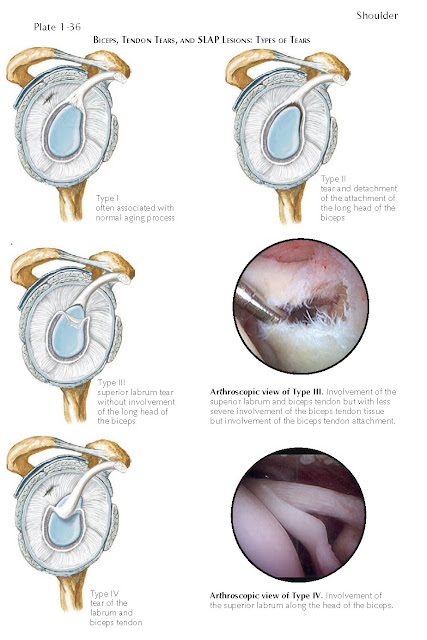 Diagnosis of SLAP lesions is performed with a variety of maneuvers, including the O’Brien sign. The O’Brien sign is performed with a series of three maneuvers as shown and described in Plate 1-35. A positive test for a SLAP lesion results in pain in the anterior aspects of the shoulder with a resisted forward elevation. These symptoms are less so with the arm in external rotation and also not significantly present with the arm in internal rotation but in the plane of the scapula.