BRONCHIAL SUBMUCOSAL GLANDS
The submucosal glands of the human airways are of the branched tubuloacinar type: tubulo refers to the main part of the secretory tubule and acinar to the blind end of such a tubule.
Three-dimensional reconstruction of the gland reveals its various zones:
1.  The origin is referred to as the ciliated duct and is lined by bronchial epithelium with its mixed population of cells. With the naked eye, the origin of the gland is seen as a hole of pinpoint size in the surface epithelium of the bronchus.
2.  The second part of the duct expands to form the collecting duct and is lined by a columnar epithelium in which the cells are eosinophilic after staining with hematoxylin and eosin. Ultrastructural examination shows these cells to be packed with mitochondria, resembling the cells of the striated duct of the salivary gland (except that they lack the folds of membrane responsible for the appearance of striation). The collecting duct may be up to 0.25 mm in diameter and 1 mm long. It passes obliquely from the airway lumen, so the usual macroscopic section does not include the full length of the duct. It is usually seen as a rather large “acinus” composed of cells without secretory granules.
3.  About 13 tubules rise from each collecting duct. These may branch several times and are closely intertwined with each other. The secretory cells lining these tubules are of two types: mucous and serous. Mucous cells line the central or proximal part of a tubule; serous cells line the distal part. Outpouchings or short-sided tubules may arise from the sides of the mucous tubules, and these are lined by serous cells. The peripheral portion of a tubule usually branches several times, and each of the ﬁnal blind endings is lined with serous cells. 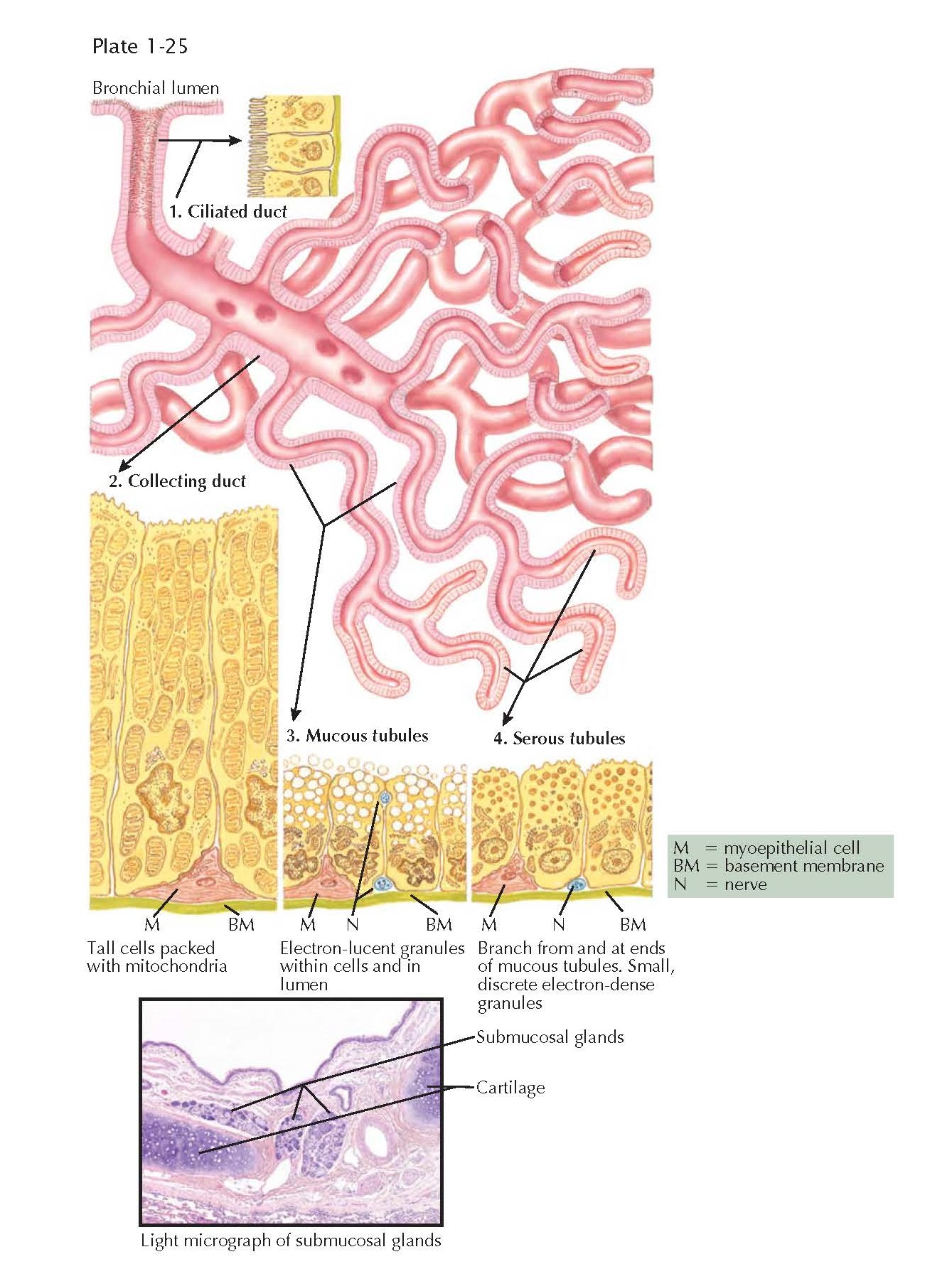 The gland tissue is internal to a basement membrane. In addition to the cell types described above, the following are found: (1) myoepithelial cells; (2) “clear” cells; and (3) nerve ﬁbers, including motor ﬁbers. Outside the basement membrane, there are rich vascular and lymphatic networks and the nerve plexus.
In histologic cross-sections, the submucosal gland is seen as a compact structure. In a main bronchus of an adult, the gland is about 0.2 mm in diameter or less than one-third the thickness of the airway wall (measured from the luminal surface to the cartilage layer). This ratio is similar in both children and adults and is consistent throughout airways at various levels of branching. The ratio of gland  size to wall thickness (sometimes referred to as the Reid index) is a useful way of assessing abnormalities in gland size because gland hypertrophy is a hallmark of a number of inﬂammatory diseases of the large airways.
In humans, the secretory tubules of the mucous and serous cells contain mainly an acid glycoprotein, either sialic acid or its sulfate ester.
The concentration of bronchial submucosal openings in the trachea is on the order of one gland opening per mm2. The glands become sparser towards the periphery of the lung, their decrease in number and concentration being parallel to the diminution in the amount of cartilage in the airway.