ULTRASTRUCTURE OF THE TRACHEAL, BRONCHIAL, AND BRONCHIOLAR EPITHELIUM


ULTRASTRUCTURE OF THE TRACHEAL, BRONCHIAL, AND BRONCHIOLAR EPITHELIUM
The lining of the respiratory airways is predominantly a pseudostratiﬁed, ciliated, columnar epithelium in which all cells are attached to the basement membrane but not all reach the lumen. In the smaller peripheral airways, the epithelium may be only a single layer thick and cuboidal rather than columnar because basal cells are absent at this level.
Ciliated cells are present in even the smallest airways and respiratory bronchioles, where they are adjacent to alveolar lining cells. The “ciliary escalator” starts at the most distal point of the airway epithelium. In smaller airways, the cilia are not as tall as in the more central airways. Eight epithelial cell types can be identiﬁed in humans, although ultrastructural features and cell kinetics have been studied mainly in animals. The following classiﬁcation is based on studies in the rat: the (1) basal and (2) pulmonary neuroendocrine cells are attached to the basement membrane but do not reach the lumen; (3) the intermediate cell is probably the precursor that differentiates into (4) the ciliated cell, (5) the brush cell, or one of the secretory cells (6) the mucous (goblet) cell, (7) the serous cell, or (8) the Clara cell. 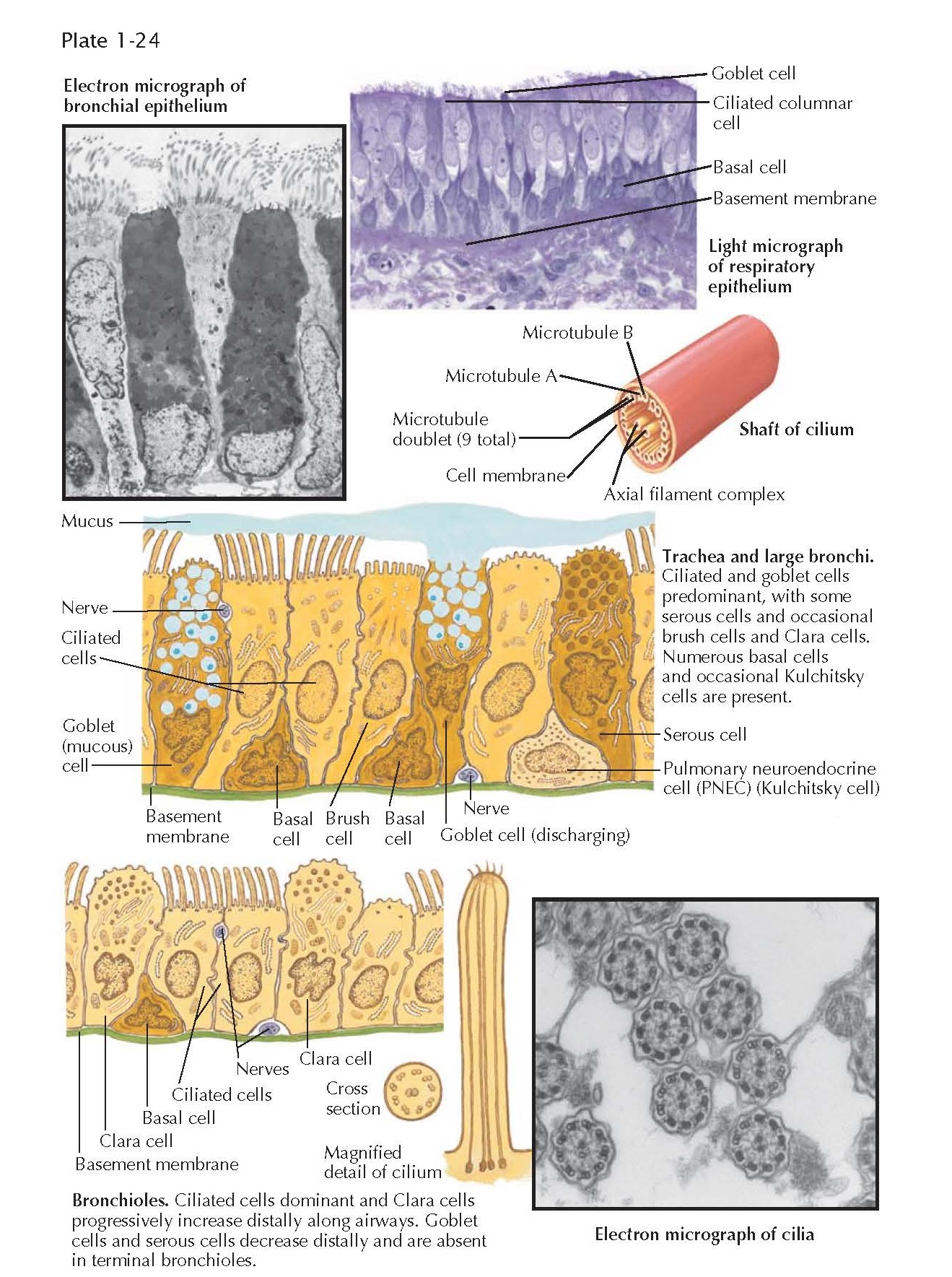 The basal cell divides and daughter cells pass to the superﬁcial layer.
The pulmonary neuroendocrine cell (PNEC), previously referred to as the Kulchitsky cell, contains numerous neurosecretory granules and is a rare, but likely important, functional cell of the airway epithelium. The PNEC neurosecretory granules contain serotonin and other bioactive peptides such as gastrin-releasing peptide (GRP). PNECs are more numerous before birth and may play a role in the innate immune system. The intermediate cell is columnar. It has electronlucent cytoplasm and no special features. It is probably the cell that differentiates into the others.
The ciliated cell carries the cilia of the respiratory epithelium. The cilium has nine double pairs of axonemes and a special axoneme in the center. The arrangement is modiﬁed at the base and at the apex, where a coronet of small claws has been identiﬁed. The feet of the axonemes are arranged so that a cilium “plugs” into the cytoplasm. The axonemes are attached to each other by “arms” of dynein, a contractile protein, and these provide the mechanism for ciliary motion.
The brush cell resembles a similar cell type found in the gut and in the nasal sinuses. Its function in the respiratory tract remains unknown, but hypotheses regarding its function include immune surveillance, cell regeneration, chemoreceptor, sensor of alveolar ﬂuid or air tension, and regulator of capillary resistance and perfusion.
The mucous (goblet) cell is a secretory cell containing numerous large and conﬂuent secretory granules. Electron microscopic studies have shown that conﬂuence represents fusion of the two trilaminar membranes of adjacent granules to produce a pentilaminar layer.
The serous cell resembles the serous cell of the submucosal gland and contains small, discrete, electrondense secretory granules. Its cytoplasm is also more electron dense than that of the Clara cell.
The Clara cell also contains small, discrete, electrondense granules, but compared with the serous cell, the cytoplasm is electron lucent, and there is relatively more smooth than rough endoplasmic reticulum.
The serous cell is mainly found centrally; the Clara cell is found only distally. These are the more common secretory cells of the airways, but irritation, drug reaction, or infection may lead to an increase in the number of secretory cells. The serous and Clara cells then develop into mucous cells. Differentiated cells are seen in mitosis, but this is probably not the main way that cell numbers increase.
The basement membrane is well deﬁned and becomes thinner in small airways. In certain diseases notably asthma the reticular basement membrane (lamina reticularis) increases in thickness, although its structure remains normal.
Nerve ﬁbers are seen within the epithelium. They are nonmyelinated and without a Schwann cell sheath. Their vesicle content suggests that the ﬁbers are sensory or motor and either cholinergic or adrenergic in type.