The T‐Cell Surface Receptor For Antigen (TCR)
As alluded to earlier, T‐cells interact with antigen in a manner that is quite distinct from the way in which B‐cells do; the receptors that most T‐cells are equipped with cannot directly engage soluble antigens but instead “see” fragments of antigen that are immobilized within a narrow groove on the surface of MHC molecules (Figure 4.1b). 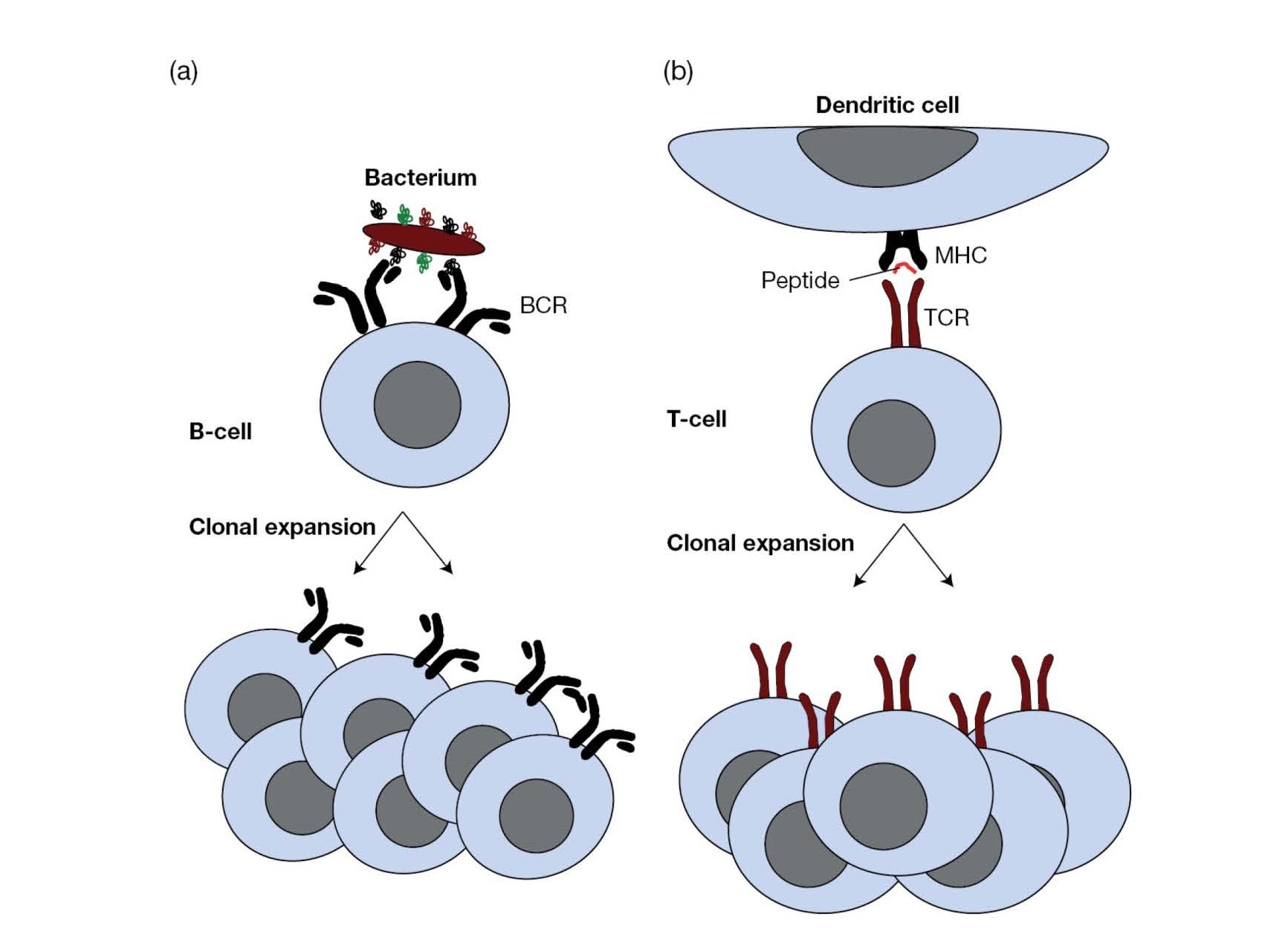 As we shall discuss in detail in Chapter 5, MHC molecules bind to short 8–20 amino acid long peptide fragments that represent “quality control” samples of the proteins a cell is expressing at any given time, or what it has internalized through phagocytosis, depending on the type of MHC molecule. In this way, T‐cells can effectively inspect what is going on, antigenically speaking, within a cell at any given moment by surveying the range of peptides being presented within MHC molecules. Another major difference between B‐ and T‐cell receptors is that T‐cells cannot secrete their receptor molecules in the way that B‐cells can switch production of Ig from a membrane‐bound form to a secreted form. These differences aside, T‐cell receptors are structurally quite similar to antibody as they are also built from modules that are based upon the immunoglobulin fold.
Before we explore the structural aspects of T‐cell receptors, please keep in mind that the practical function of these recep­ tors is to enable a T‐cell to probe the surfaces of cells looking for nonself peptides. If a T‐cell finds a peptide–MHC combination that is a good match for its TCR it will become acti­ vated, undergo clonal expansion, and differentiate to a mature effector T‐cell capable of joining the fight against the infectious agent generating these nonself peptides. In practice, such an eventuality is a very low probability event because, as we shall see, TCRs are generated in such a way as to produce an enor­ mous variety of these receptors, each with their own exquisite specificity for a particular peptide–MHC combination. Moreover, because the majority of peptides presented on MHC molecules at any one time will be derived from self (unless the antigen‐presenting cell is infected with a microorganism), this further reduces the probability of a T‐cell encountering a per­ fect nonself peptide–MHC combination to trigger a response.

Milestone 4.1 The T‐cell receptor
As T‐lymphocytes respond by activation and proliferation when they contact antigen presented by cells such as macrophages, it seemed reasonable to postulate that they do so by receptors on their surface. In any case, it would be difficult to fit T‐cells into the clonal selection club if they lacked such receptors. Guided by Occam’s razor (the law of parsimony, which contends that it is the aim of science to present the facts of nature in the simplest and most economical conceptual formulations), most investigators plumped for the hypothesis that nature would not indulge in the extravagance of evolving two utterly separate molecular recognition species for B‐ and T‐cells, and many fruitless years were spent looking for the “Holy Grail” of the T‐cell receptor with anti‐immunoglobulin serums or monoclonal antibodies. Success only came when a monoclonal antibody directed to the idiotype of a T‐cell was used to block the response to antigen. This was identified by its ability to block one individual T‐cell clone out of a large number, and it was correctly assumed that the structure permitting this selectivity would be the combining site for antigen on the T‐cell receptor. Immunoprecipitation with this antibody brought down a disulfide‐linked heterodimer composed of 40–44 kDa subunits (Figure M4.1.1).

The other approach went directly for the genes, arguing as follows. The T‐cell receptor should be an integral membrane protein not present in B‐cells. Hence, T‐cell polysomal mRNA from the endoplasmic reticulum, which should provide an abundant source of the appropriate transcript, was used to prepare cDNA from which genes common to B‐ and T‐cells were subtracted by hybridization to B‐cell mRNA. The resulting T‐specific clones were used to probe for a T‐cell gene that is rearranged in all functionally mature T‐cells but is in its germline configuration in all other cell types (Figure M4.1.2). In such a way were the genes encoding the β‐subunit of the T‐cell receptor uncovered.

The receptor for antigen is a transmembrane heterodimer
Identification of the TCR proved more difficult than initially anticipated (Milestone 4.1), but eventually the receptor was found to be a membrane‐bound molecule composed of two disulfide‐linked chains, α and β. Each chain folds into two Ig‐ like domains, one having a relatively invariant structure and the other exhibiting a high degree of variability, so that the αβ TCR has a structure really quite closely resembling an Ig Fab fragment. This analogy stretches even further – each of the two variable regions has three hypervariable regions (or complementarity determining regions, CDRs) that X‐ray diffraction data have defined as incorporating the amino acids that make contact with the peptide–MHC ligand. Plasticity of the CDR loops is an important factor, enabling TCRs to mold around structurally diverse peptide MHC combinations.
Although the manner in which the TCR makes contact with peptide–MHC is still not fully understood, it appears that in some TCRs CDRs 1 and 2 of the TCR bear much of the responsibility for making contact with the MHC molecule itself, while CDR3 makes contact with the peptide; however in other TCRs  the  reverse  is  true. Whatever  CDRs bear  the responsibility for contacting MHC versus peptide, it is clear that these are the recognition components of the receptor and so it follows that it is here that much of the variability is seen between TCRs, as we shall discuss later.
Both α and β chains are required for antigen specificity as shown by transfection of the T‐receptor genes from a cytotoxic T‐cell clone specific for fluorescein to another clone of a different specificity; when it expressed the new α and β genes, the transfected clone acquired the ability to lyse the fluoresceinated target cells. Another type of experiment utilized T‐cell hybridomas formed by fusing single antigen‐specific T‐cells with T‐cell tumors to achieve “immortality.” One hybridoma recog­ nizing chicken ovalbumin, presented by a macrophage, gave rise spontaneously to two variants, one of which lost the chromosome encoding the α chain, and the other, the β chain. Neither variant recognized antigen but, when they were physically fused together, each supplied the complem ntary receptor chain, and reactivity with antigen was restored.

CD4 and CD8 molecules act as co‐receptors for TCRs
In addition to the TCR, the majority of peripheral T‐cells also express one or other of the membrane proteins CD4 or CD8 that act as co‐receptors for MHC molecules (Figure 4.7). CD4 is a single‐chain polypeptide containing four Ig‐like domains packed tightly together to form an extended rod that projects from the T‐cell surface. The cytoplasmic tail of the CD4 molecule is important for TCR signaling as this region is constitutively bound by a protein tyrosine kinase, Lck, that initiates the signal transduction cascade that follows upon encounter of a T‐cell with antigen (Figure 4.8). CD8 plays a similar role to CD4, as it also binds Lck and recruits this kinase to the TCR complex, but is structurally quite distinct; CD8 is a disulfidelinked heterodimer of α and β chains, each of which contains a single Ig‐like domain connected to an extended and heavily glycosylated polypeptide projecting from the T‐cell surface (Figure 4.7).

CD4 and CD8 molecules play important roles in antigen recognition by T‐cells as these molecules dictate whether a T‐ cell can recognize antigen presented by MHC molecules that obtain their peptide antigens primarily from intracellular (MHC class I), or extracellular (MHC class II), sources. This has major functional implications for the T‐cell, as those lymphocytes that become activated upon encounter with antigen presented within MHC class I molecules (CD8+ T‐cells) invariably become cytotoxic T‐cells, and those that are activated by peptides presented by MHC class II molecules (CD4+ T‐cells) become helper T‐cells (see Figure 7.1).

There are two classes of T‐cell receptors
Not long after the breakthrough in identifying the αβ TCR, reports came of the existence of a second type of receptor composed of γ and δ chains. As it appears earlier in thymic ontogeny, the γδ receptor is sometimes referred to as TCR1 and the αβ receptor as TCR2.
The γδ cells make up only 1–5% of the T‐cells that circulate in blood and peripheral organs of most adult animals; however these cells are much more common in epithelial‐rich tissues such as the skin, intestine, reproductive tract, and the lungs where they can comprise almost 50% of the T‐cell population. It cannot be denied that γδ T‐cells are somewhat of an oddity among T‐cells; unlike αβ T‐cells, γδ cells do not appear to require antigen to be presented within the context of MHC molecules and are thought to be able to recognize soluble antigen akin to B‐cells. Perhaps because of this lack of dependence on MHC for antigen presentation, the majority of γδ T‐cells do not express either of the MHC co‐receptors, CD4 or CD8 (Table 4.1).