Neurogenic Disorders of Mouth and Pharynx


Neurogenic Disorders of Mouth and Pharynx 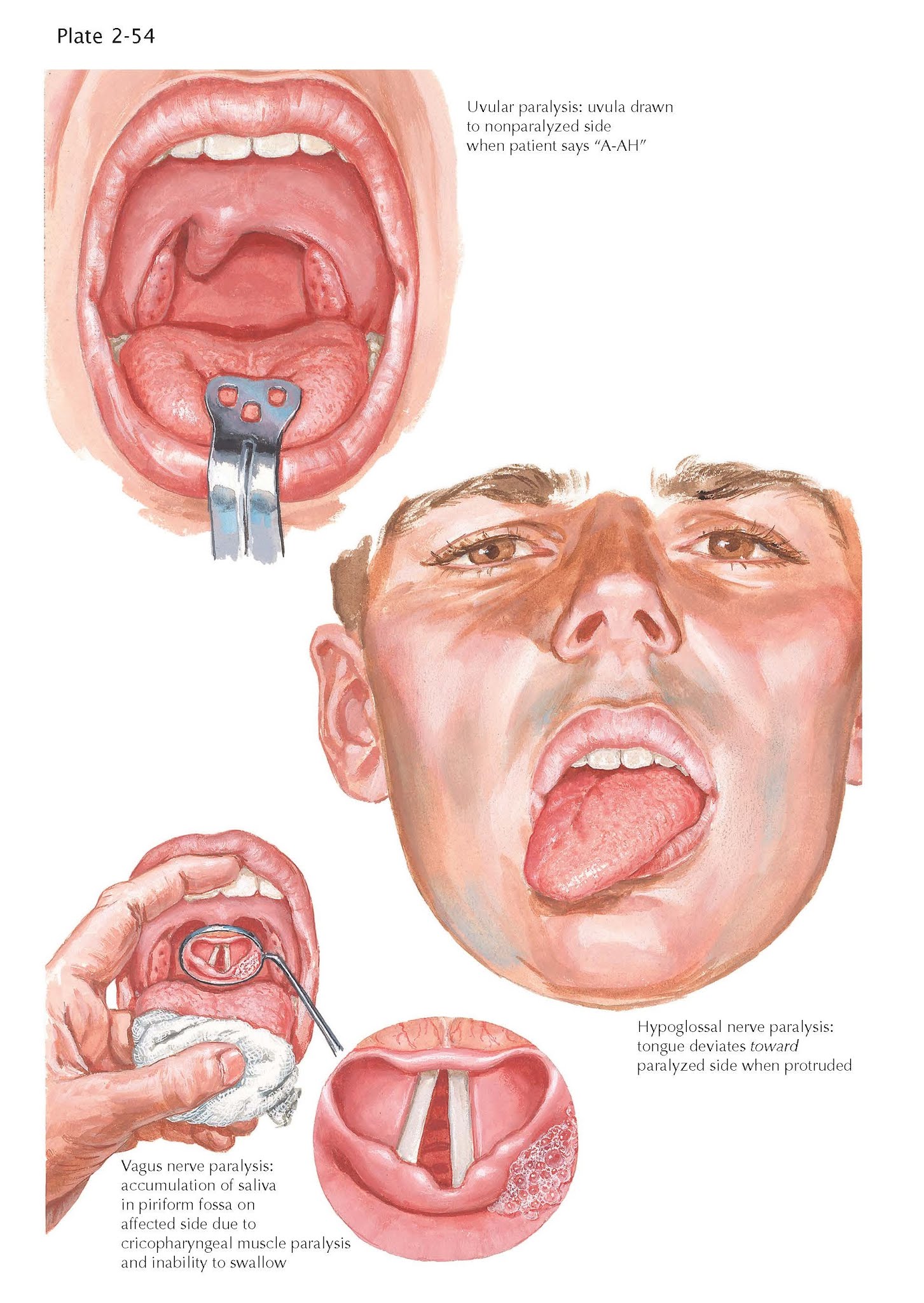 The motor innervation to the pharynx and almost all of the sensory supply is through the pharyngeal plexus, which is formed by branches of cranial nerves IX and X. Disturbances to the neural conduction of both of these cranial nerves will be reviewed together because anatomically and functionally there is considerable overlap in their conductive patterns.

Normally, the uvula hangs in midposition, and in case of a unilateral paralysis, it deviates to the healthy side. This can be demonstrated when the patient utters “A-AH.” In bilateral, peripheral, or nuclear (bulbar) palsy, the uvula does not move at all on attempted phonation or reflex stimulation. On the other hand, in supranuclear (pseudobulbar) palsy, the lower motor neuron reflex is preserved, and the uvula will move on tickling or stimulation with a tongue depressor, but it will not move on willful effort. The loss of pharyngeal reflex can be tested by irritation with a tongue depressor. Deglutition can be examined by having the patient swallow a few mouthfuls of water and observing the upward excursion of the larynx. In paralysis of the soft palate, nasal regurgitation or spasmodic coughing is noted because the fluid is propelled into the nasal cavity, which is incompletely closed during the act of swallowing (nasal regurgitation). Nasal and palatal speech, aphonia and dyspnea, and difficulty in swallowing are the essential signs of a vagus paralysis. Because vagal paralysis leaves the superior pharyngeal constrictor muscle without innervation, retention of barium and distention of the involved piriform fossa can be demonstrated with a modified barium swallow. Further-more, it is possible to observe pooling of the saliva in the postcricoid region and in the involved piriform fossa by mirror laryngoscopy or during a fiberoptic endoscopic evaluation of swallowing. The vagal paralysis may be peripheral, as in a postdiphtheritic condition or from a surgical resection; it may be part of a jugular foramen syndrome; or it may have an intracranial origin, as occurs in amyotrophic sclerosis, thrombosis of the posterior inferior cerebellar artery, syringomyelia, or true bulbar palsy. Paralysis may also result from supranuclear involvement (upper motor neuron), as seen usually in multiple vascular lesions producing so-called pseudobulbar paralysis. Normally, the tongue, which is innervated by the 12th hypoglossal nerve, can protrude far out in the midline. In unilateral paralysis of this nerve, the tongue deviates to the paralyzed side. In complete bilateral paralysis. the tongue cannot protrude at all and lies flat in the mouth. Unilateral or bilateral paralysis may be associated with atrophy and fibrillation, both indicative of peripheral involvement. Articulation, except for the pronunciation of labials, is impaired. In vagal paralysis the recurrent laryngeal nerve on the same side is always involved. This produces hoarseness owing to fixation of the vocal fold. In bilateral paralysis, the fold’s extrinsic pressure most often assumes the cadaveric position or may become fixed in the midline, producing dyspnea and requiring emergency tracheotomy. Recurrent laryngeal nerve paralysis is most often attributed to surgical trauma, extrinsic compression from enlarged lymph nodes, and local spreading of regional cancers.