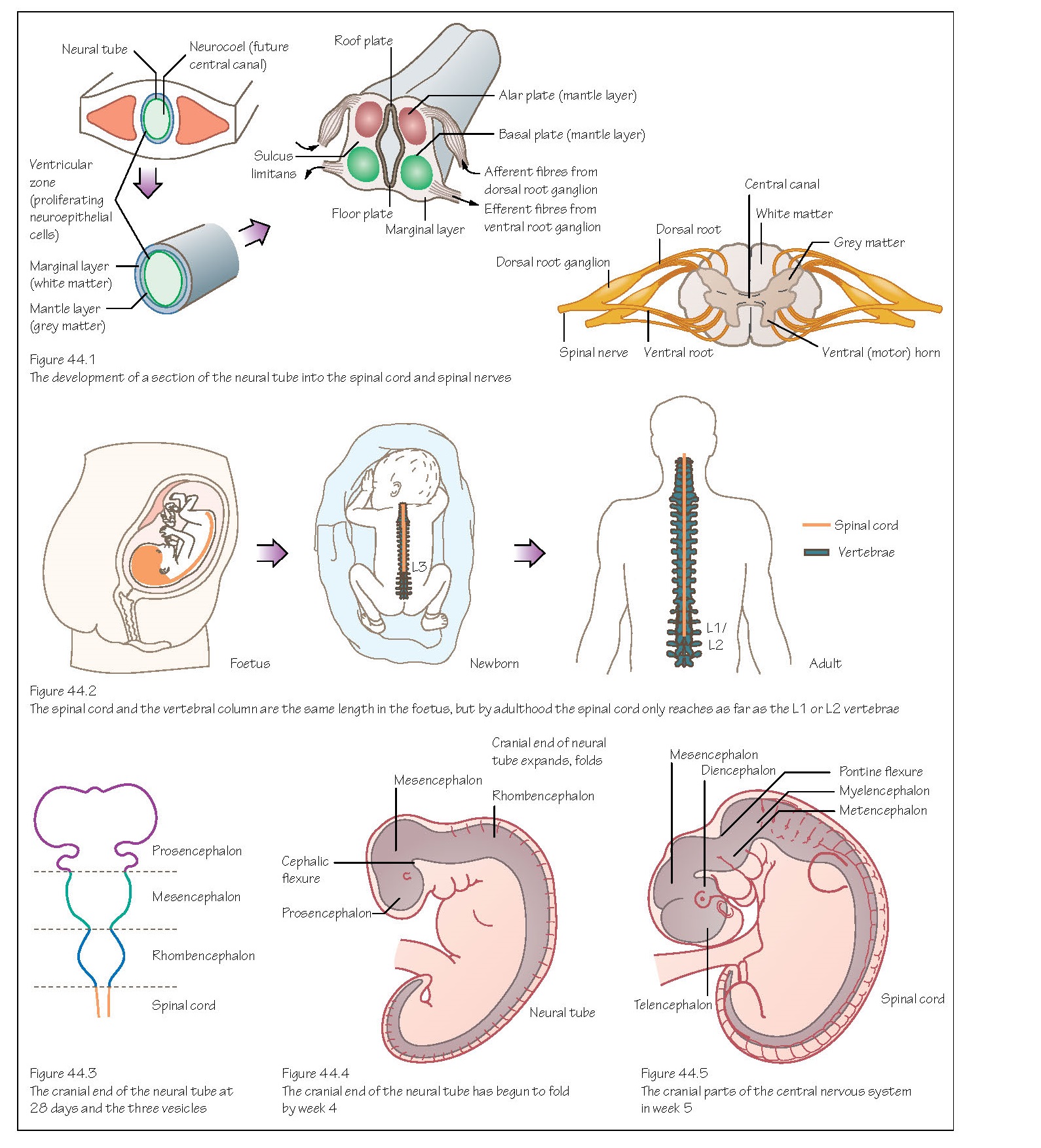 Spinal cord
The caudal end of the neural tube continues to elongate and form the spinal cord. A lumen through the centre of the spinal cord, the neurocoel (or neural canal), forms by week 9 and will become the central canal. The neurocoel is lined with thickening layers of neuroepithelia known as the ventricular zone (Figure 44.1) or ependymal layer.
Cells of the ventricular zone differentiate into neuroblasts and glioblasts (or spongioblasts). Glioblasts will form supporting cells, or neuroglial cells. Neuroblasts become neurons and migrate out to form the mantle (or intermediate) layer of cell bodies, which will form the grey matter. Surrounding this layer is the outer marginal layer that carries the axons from the neurons in the mantle layer, and will become white matter (Figure 44.1).
Dorsal root ganglia (also known as spinal ganglia) outside the neural tube formed from neural crest cells extend central processes which grow into the neural tube. Some form synapses with neurons in the mantle layer (grey matter) while other central processes ascend within the marginal layer (white matter).
Further distinction of the mantle layer occurs as the ventral area becomes the basal plates and the dorsal part becomes the alar plates, forming the ventral motor horns and dorsal sensory horns, respectively (Figure 44.1). They are divided by a groove, the sulcus limitans. Between these horns the intermediate horn develops containing neurons of the sympathetic nervous system between spinal levels T1 and L2 (or L3).
Spinal nerves form as the axons of dorsal and ventral roots from the spinal cord combine, with input from peripheral processes of the dorsal root ganglia and, where level appropriate, input from the autonomic nervous system.
In the embryo the spinal cord reaches to the caudal end of the vertebral column. Towards the end of the embryonic period the coccygeal vertebrae are reduced and the vertebral column grows rapidly causing the tail of the spinal cord to extend to the level of the L3 vertebra by birth, and by adulthood commonly only reaches to between L1 and L2 (Figure 44.2).
Brain
Three vesicles develop in the cranial end of the neural tube (Figure 44.3). The distinct alar and basal plates we saw in the spinal cord are retained as the hindbrain and midbrain develop, whereas in the forebrain the dorsal alar plates expand and the ventral basal plates degenerate.
The vesicles become the prosencephalon (forebrain), mesencephalon (midbrain) and rhombencephalon (hindbrain). As the vesicles grow the tube folds (Figure 44.4). In the fifth week the three vesicles become five, with the forebrain and hindbrain both splitting into two, forming the telecephalon and diencephalon from the forebrain, and from the hindbrain the metencephalon and the myelencephalon form (Figure 44.5).
The dorsal telencephalon of the forebrain will grow rapidly to form the cerebral cortex, and the ventral telencephalon will become the basal ganglia.
The diencephalon will form the optic cup and stalk, pituitary gland, thalamus, hypothalamus and pineal body.
The caudal part of the hindbrain, the myelencephalon, becomes the medulla oblongata. The metecephalon develops into the pons ventrally and the cerebellum dorsally. The midbrain, together with the pons and medulla oblongata form the brainstem.
Ventricles of the brain form from the lumen of the neural tube. Ventricles contain cerebrospinal fluid produced by choroid plexuses. Lateral ventricles of the telencephalon link with the third ventricle of the diencephalon, which is connected to the fourth ventricle of the myelencephalon through the cerebral aqueduct of the mesencephalon. The fourth ventricle is continuous with the central canal of the spinal cord.
Neural crest cells
Neural crest cells migrate to both sides of the spinal cord and form the dorsal root ganglia (sensory ganglia) of the spinal nerves. In the hindbrain area they contribute to cranial nerve ganglia, sensory ganglia of CN V, VII, VIII, IX and X.
Meninges
Of the connective tissue layers that surround the brain, the pia mater and arachnoid mater are mesoderm and neural crest cell derived, whereas the dura mater is only mesoderm derived.
Clinical relevance
Encephalocoele is the herniation of dura, potentially containing brain tissue, through a midline skull defect, caused by incomplete closure of the neural tube. Repaired surgically, recovery depends upon whether or not neural tissue was enclosed in the encephalocoele.
Anencephaly describes incomplete closure at the cranial end of the neural tube, resulting in a complete failure of forebrain formation. This is lethal and most infants with this condition are stillborn.
Hydrocephalus is a condition resulting from excess cerebrospinal fluid (CSF) resulting from a blockage of flow, failure to reabsorb or increased production. Conditions include increasing head circumference and vomiting, but ventricular dilation can be identified before symptoms become visible. Treatment options include inserting a shunt to open a t the CSF to an area where it can be reabsorbed.