Peripheral Nervous System
Time period: day 27 to birth
Introduction
The peripheral nervous system develops in tandem with the brain and spinal cord. It connects the central nervous system to structures of the body as they form and includes the spinal nerves, cranial nerves and autonomic nervous system.
This process begins with neurulation (see Chapter 17), when ectoderm is induced by the notochord to form neuroectoderm. This neuroectoderm in turn produces neuroblasts (primitive neurons) and neural crest cells. 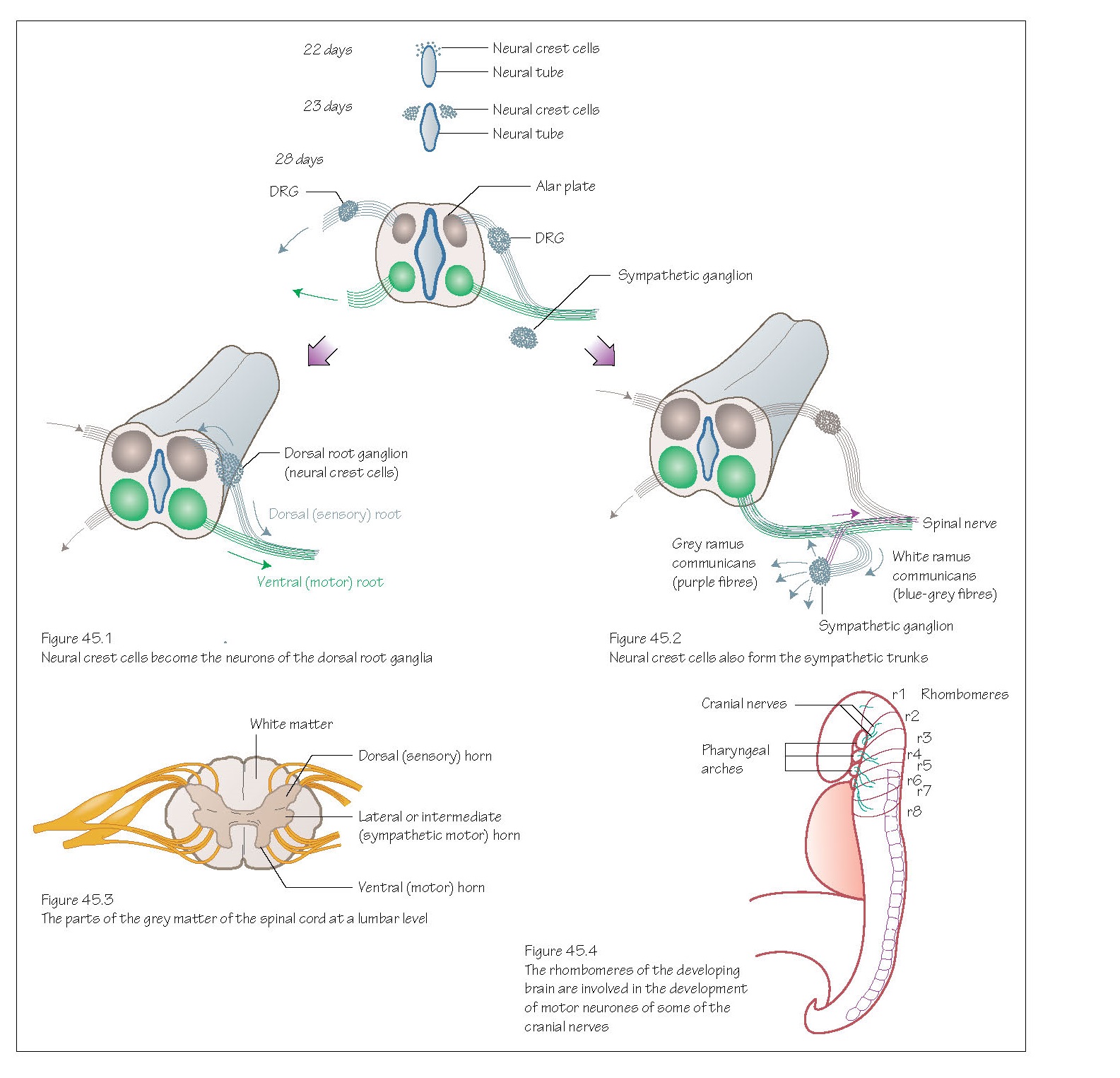 Spinal nerves
Neural crest cells migrate out from the neural tube, passing towards multiple targets throughout the embryo (see Chapter 18). Some neural crest cells only migrate a little way from the developing spinal cord, collect together and differentiate to form neurons of the dorsal root ganglia (Figure 45.1). Located bilaterally to the spinal cord, the dorsal root ganglia send afferent processes back towards the alar plate of the spinal cord (see Figure 44.1), eventually passing to the dorsal horn. The dorsal root ganglia also send processes out to run alongside processes of neurons of the ventral root. Their combined bundle of neuronal axons become the spinal nerve.
Dorsal root ganglia contain the cells bodies of sensory neurons from afferent spinal nerve fibres. It could be considered that these ganglia are grey matter of the spinal cord that have moved out to the peripheral nervous system.
Neurons in the (ventral) basal plates of the developing spinal cord send fibres outwards from the cord to meet the fibres from the dorsal root ganglion. Fibres grouping to leave the spinal cord form the ven- tral horn, the motor fibres of the spinal nerves (Figures 44.1 and 45.1). The mixed collection of motor and sensory fibres split again almost as soon as they meet, forming two bundles of fibres: the dorsal ramus and the ventral ramus. The dorsal ramus passes dorsally to the deep axial musculature of the back, the synovial vertebral joints and the skin of this region. The ventral ramus sends fibres to the ventral and lateral parts of the trunk and to the
upper and lower limbs, depending upon the spinal level.
Neural crest cells migrate to the new axons that extend away from the central nervous system and wrap themselves around them, differentiating to become neurolemmal (Schwann) cells. Myelin within these cells causes the fibres to appear white. This is apparent from around week 20.

Dermatomes
Spinal nerves develop at the level of each somite, and the segmented organisation of embryonic development can be seen in the adult segmented pattern of cutaneous dermatomes (see Chapter 22).
A dermatome is a region of skin that is predominantly supplied by the sensory component of one spinal nerve. The dermatomes are named according to the spinal nerve that supplies them (see Figure 22.5).

Autonomic nervous system
Some neural crest cells migrating out from the neural tube collect dorsolaterally to the dorsal aorta in the thorax. They differentiate and become chains of sympathetic ganglia connected by longitudinal nerve fibres running cranially and caudally (Figure 45.2). Neuroblasts migrate from the ganglia cranially into the neck and caudally into the abdomen and pelvis to complete the sympathetic trunks.
Other neural crest cells migrate ventrally to the aorta to form the preaortic ganglia such as the coeliac and mesenteric ganglia, while others migrate towards organs such as the lungs, heart and gastrointestinal tract to form sympathetic organ plexuses.
Sympathetic neurons of the developing spinal cord in the inter- mediolateral cell column (intermediate or lateral horn) of thoracolumbar segments T1–L2 (Figure 45.3) send axons out from the spinal cord through the ventral root to each trunk ganglion. These axons form the white ramus communicans passing between the spinal nerve and the sympathetic ganglion (Figure 45.2). These preganglionic sympathetic fibres either synapse with neurons in the ganglion, ascend or descend to synapse in a ganglion of a different level, or pass through the ganglion/ganglia without synapsing to run towards preaortic (or prevertebral) ganglia or organs as splanchnic nerves.
Postganglionic fibres pass onwards to viscera or group together to pass back to a spinal nerve as a grey ramus communicans (unmyelinated). Grey ramus communicans are found at all spinal levels and allow postganglionic fibres to pass with other nerves to reach structures, for example in the limbs.
Neurons of the parasympathetic nervous system form in the brainstem and sacral part of the spinal cord. The parasympathetic nuclei in the brainstem contribute preganglionic fibres to the oculomotor (CN III), facial (CN VII), glossopharyngeal (CN IX) and vagus (CN X) nerves. Preganglionic parasympathetic fibres of the sacral spinal cord form pelvic splanchnic nerves.
Postganglionic parasympathetic neurons differentiate from neural crest cells and can be found either in ganglia or near the viscera.

Cranial nerves
Cranial nerves develop in a similar way to the spinal nerves, with motor nuclei differentiating from the neuroepithelium and sensory nuclei forming outside the brain.
The olfactory nerve (CN I) and the optic nerve (CN II) are linked with the telencephalon and diencephalon, respectively. The olfactory nerve connects to the olfactory bulb, a growth from the prosencephalon. The oculomotor nerve (CN III) originates from the dorsal midbrain (mesencephalon) and the trochlear nerve (CN IV) from the ventral midbrain (metencephalon). Similarly, CN V–VIII arise from the metencephalon and CN IX–XII arise from the myelencephalon.
Cranial nerves IV–VII and IX–XII develop from the hindbrain which has been divided into eight sections called rhombomeres by day 25 (Figure 45.4). Rhombomeres appear ventral to the cephalic flexure by day 29 and will form the motor neurons for these cranial nerves (note that these are the cranial nerves with motor function, hence the skipping of CN VIII).
Neural crest cells form the parasympathetic neurons for CN III, VII, IX and X.
The development and structure of the cranial nerves is very al nerves, but remember that not all cranial erves carry both sensory and motor neurons.