The Ear
Time period: 22 day to birth
Internal ear
The function of the internal ear is to receive sound waves and interpret them into nerve signals, and to identify changes in balance. 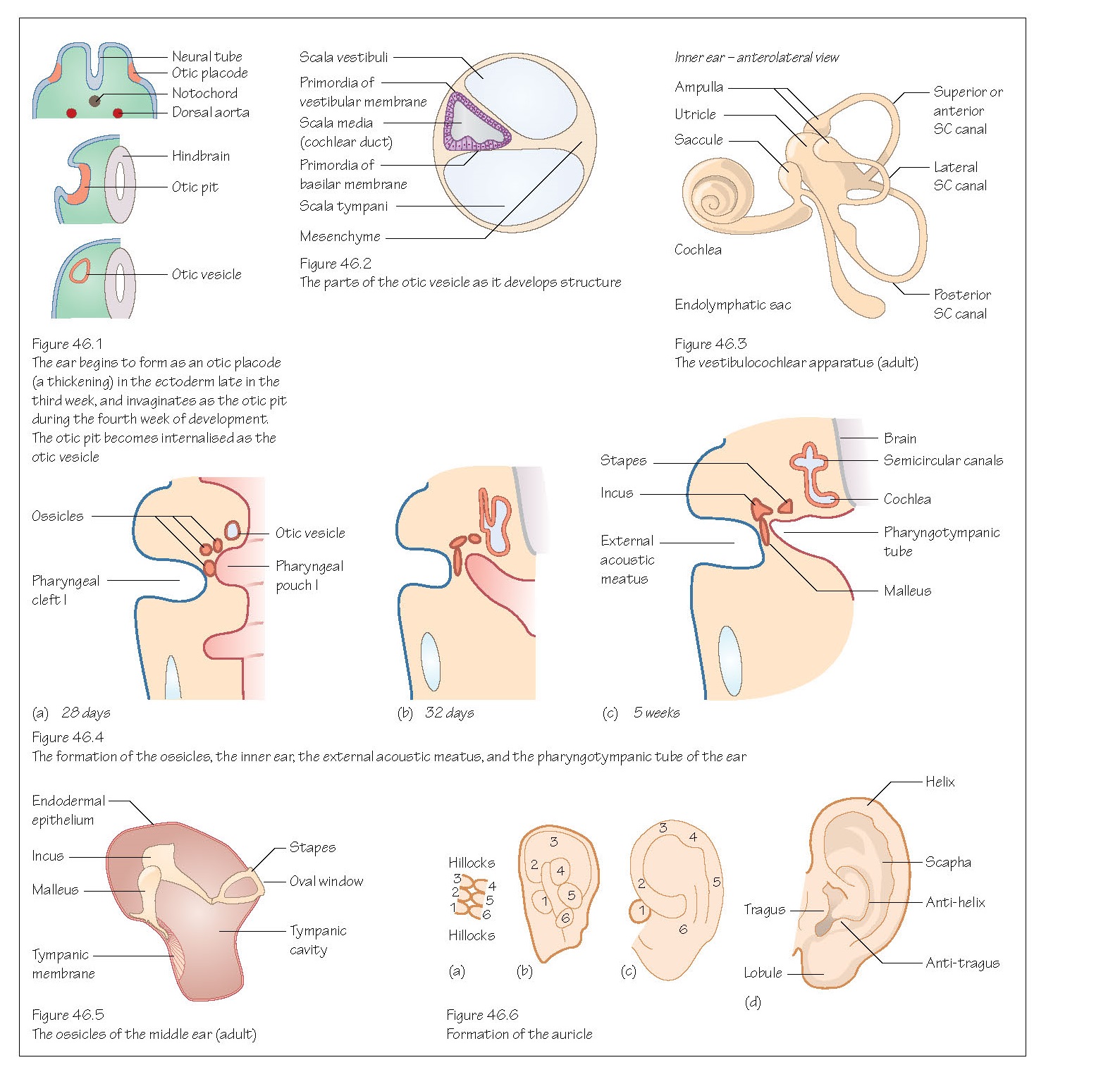 Membranous labyrinth
At about 22 days, a thickening of ectoderm on either side of the hindbrain develops; this is the otic placode (Figure 46.1). The placode invaginates forming a pit that later becomes separated from the ectoderm, forming the otic vesicle (or otocyst) deep to the ectoderm. The otic vesicle is surrounded by mesoderm that will become the otic capsule, the cartilaginous precursor of the bony labyrinth.
The upper parts of the otic vesicle will develop into the utricle, semicircular canals and endolymphatic duct (the part of the inner ear involved in balance). The lower portion will become the saccule, which develops a tubular outgrowth that becomes the cochlear duct (the part of the inner ear involved in hearing).
Mesenchyme surrounding the cochlear duct becomes cartilaginous and two vacuoles appear within the cartilage. These vacuoles become the scala tympani and scala vestibuli. Positioned between them the cochlear duct (the scala media) remains, separated from the other spaces by membranes of mesenchyme (Figure 46.2). The spaces fill with perilymphatic fluid.
In the sixth week the cochlear duct grows into the surrounding mesenchyme, spiralling. It completes 2.5 spirals by the end of week 8 and is fully developed by the end of the second trimester (Figure 46.3).
Epithelial cells of the cochlear duct differentiate into the sensory cells and tectorial membrane of the auditory system, collectively called the Organ of Corti. These cells transmit auditory signals to the vestibulocochlear nerve (CN VIII). This space is also filled with endolymph that functions as a mechano‐electric transducer for sound waves.
The foetus can hear external sounds by week 20.
The saccule and utricle remain connected to the cochlear duct via the ductus reuniens and the utriculosaccular duct, respectively. The saccule develops a group of sensory cells involved in translating vertical movements of the head.
Three flattened bud outgrowths protrude from the utricle to form three semicircular canals, each with an ampulla at one end, filled with endolymph. In each ampulla is a collection of sensory cells that aid balance. The utricle is involved in detecting horizontal movements of the head (Figures 46.3 and 46.4).

Bony labyrinth
The cartilage that surrounds the membranous labyrinth is ossified (weeks 16–24) and creates a perilymph‐filled protective space for the inner ear. This area is connected to the subarachnoid space at the base of the brain through the cochlear aqueduct in the temporal bone. This is the petrous part of the temporal bone and is one of the hardest bones in the body. The vestibule of the inner ear contains the oval window, which is in contact with the stapes bone of the middle ear (Figures 46.4 and 46.5).

Middle ear
The middle ear consists of the tympanic cavity, the pharyngo- tympanic tube (or auditory or Eustachian tube) and the ossicles (Figures 46.4 and 46.5).
Endoderm of the first pharyngeal pouch (see Chapter 40) extends laterally and on contact with the ectoderm of the first pharyngeal cleft forms the tubotympanic recess. The distal part of the tubotympanic recess becomes the tympanic cavity and the proximal part becomes the pharyngotympanic tube (Figure 46.4). Mesenchyme of the first and second pharyngeal arches develops into the ossicles. Specifically, the malleus and incus are derived from the first arch and the stapes from the second arch. These bones remain snug in surrounding tissue until the eighth month when the tissue dissipates and they become suspended within the developing cavity. As the tissue regresses the endoderm recedes but continues to line the cavity as a mesentery. The ligaments that will help to hold the ossicles in place develop from this mesentery.
Organisation of development of the muscles of the middle ear corresponds to the development of the bones. The tensor tympani muscle which inserts on to the malleus develops from the first pharyngeal arch and is innervated by the mandibular branch of the trigeminal nerve. The stapedius muscle which inserts on to the stapes develops from the second pharyngeal arch and is innervated by the facial nerve (see Chapters 40 and 41).

External ear
The external ear begins internally with the tympanic membrane, also known as the eardrum. This is the junction at which the internal endoderm‐lined tympanic cavity meets the ectoderm of the external auditory meatus. Squeezed between these two layers is a layer of connective tissue (Figure 46.4).
Developing from the first pharyngeal cleft, the external auditory meatus retains cells in its proximal part which form a plug until the seventh month. This disintegrates leaving a layer of epithelia to form part of the tympanic membrane.
The auricle (or pinna) develops from six swellings or hillocks (hillocks of Hiss) formed by proliferating cells which can be seen from week 6. Hillocks 1–3 are from the first pharyngeal arch, and 4–6 are from the second arch. The developing auricle begins in a location caudal to the mandible, and with directional embryonic growth its position ascends to approximately the level of the eyes (Figure 46.6).

Clinical relevance
Many factors affecting the developing ear will result in deafness. Most are caused by genetic factors but some environmental factors are involved. The rubella virus can affect the development of the organ of Corti if infected in the seventh to eighth week of develop- ment. Other factors known to cause deafness are cytomegalovirus, hyperbilirubinemia (jaundice) and bacterial meningitis.
External ear defects are quite common as the fusion of the auricular hillocks is complicated. Anomalies are often associated with other malformations. Most common chromosomal disorders have ear malformation as one of their traits. For example, trisomy 13 (Patau syndrome) gives an underdeveloped tragus and lobule, trisomy 21 (Down syndrome) gives microtia, and Ehlers–Danlos syndrome causes lop ears which stand away from the head and are often larger than normal.
Less severe anomalies can include pits and appendages (or sinuses and tags). These are remnants of the developing hillocks.