The Eye
Time period: weeks 3–10
Introduction
The development of the eye begins around day 22 with bilateral invaginations of the neuroectoderm of the forebrain (Figure 47.1).
Optic cup and lens
As the neural tube closes these invaginations become the optic vesicles and remain continuous with the developing third ventricle (Figure 47.1). Contact of these optic vesicles with the surface ectoderm induces the formation of the lens placodes (Figures 47.1 and 47.2).
As the optic vesicle invaginates it forms a double‐walled structure, the optic cup (Figure 47.2). At the same time the lens placode invaginates and forms the lens vesicle which lies in the indent of the optic cup and is completely dissociated from the surface ectoderm. Epithelial cells on the posterior wall of the lens vesicle lengthen anteriorly and become long fibres that grow forwards. It takes about 2 weeks for these fibres to reach the anterior cell wall of the vesicle. These are primary lens fibres (Figure 47.3). Secondary lens fibres form from epithelial cells located at the equator of the lens and are continuously added throughout life along the scaffold made by the primary fibres from the centre of the lens. These cells elongate and eventually lose their nuclei to become mature lens fibres. This occurs in early adulthood. 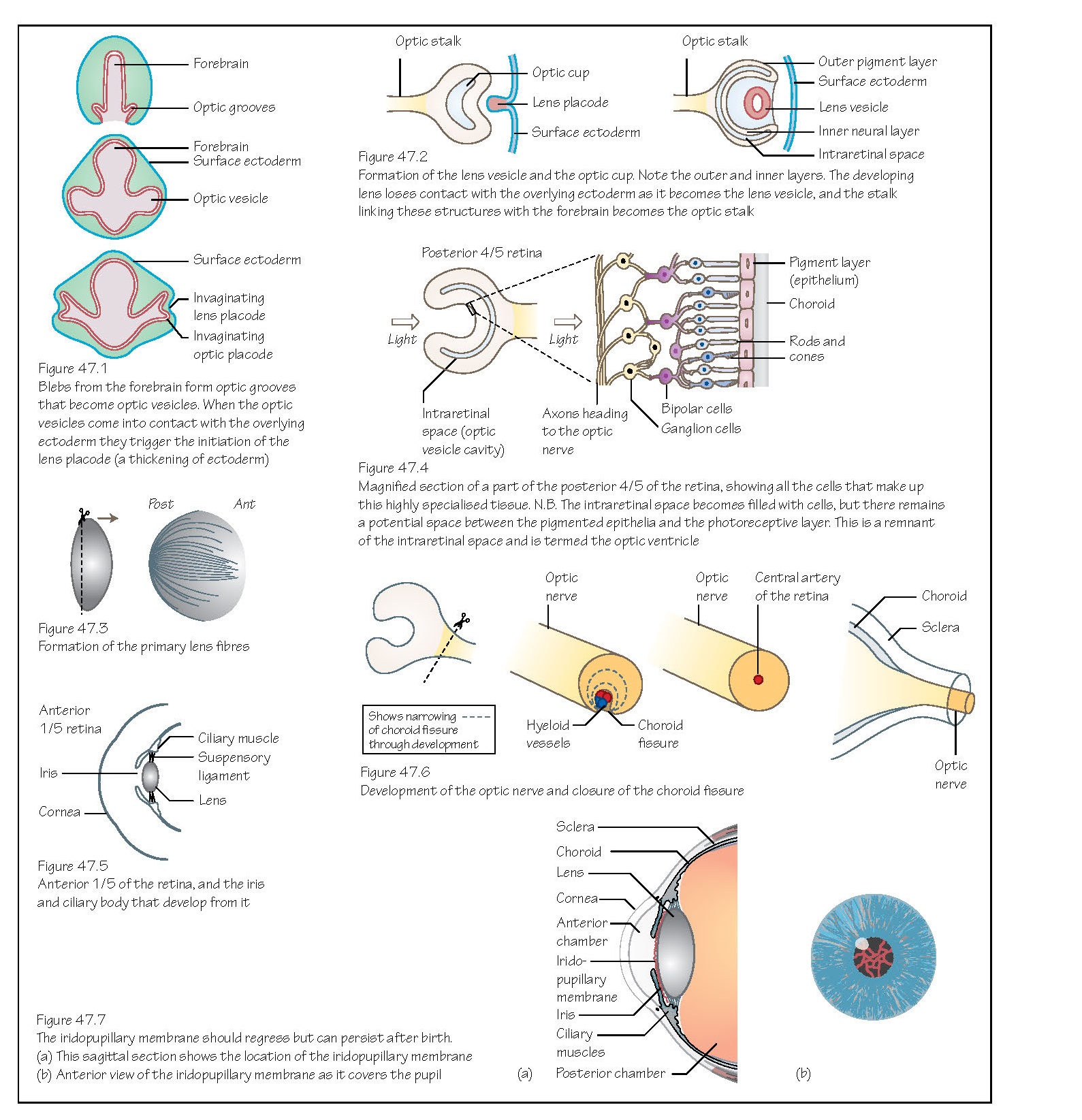 Retina
In the optic cup there is an outer layer that develops into the pigmented layer of the retina and an inner layer that becomes the neural layer.
The posterior four‐fifths of the inner neural layer (Figure 47.4) consists of cells forming the rods and cones of the photoreceptive layer. Deep to this are the neurons and supporting cells. Deeper again lies a fibrous layer comprising the axons of these neurons, with axons leading towards the optic stalk that will develop into the optic nerve.
The anterior one‐fifth of the inner layer remains one cell thick. It becomes parts of the iris and ciliary body (Figure 47.5). Ciliary muscle forms from mesenchyme that covers this part of the optic cup and is internally connected to the lens by the suspensory ligament. The complete iris forms from the inner retinal layer, the pigmented outer layer and a mesenchymal layer sandwiched between them, becoming the sphincter and dilator muscles.

Meninges
The choroid and sclera of the eye are comparable to the pia mater and dura mater of the brain, respectively. They develop from the loose mesenchyme that surrounds the posterior part of the developing eye. The choroid is highly vascular and pigmented whereas the sclera is tougher and more fibrous. The sclera is continuous with the dura mater that surrounds the optic nerve (Figure 47.6).

Extraocular muscles
Extraocular muscles include the inferior and superior oblique, medial, lateral, inferior and superior rectus and levator palpebrae superioris muscles. These muscles may develop from paraxial mesoderm of somitomeres 1–4 or from mesenchyme near the prechordal plate (a thickening of endoderm in the embryonic head) and are innervated by CN III, IV and VI.

Clinical relevance
Neonatal vision is tested in the 24 hours after birth and again at 6 weeks. Many abnormalities of the eye cause blindness, but not all. Most affect vision to some degree and as newborn infants’ eyes are not aligned and an intermittent squint can develop, it is important that these tests are carried out.
Congenital cataracts can be caused by infection, such as rubella during pregnancy, or by hereditary factors, but often there is no known cause. Cataracts may be identified from a squint, difficulty in focusing or from the child holding his or her head at an odd angle to see, and in a few cases a clouding in the lens of the eye. Congenital glaucoma is generally inherited and caused by an increase in intraocular pressure through excess fluid. It presents as watering of the eye with dilated pupils, irritability, and the cornea may be hazy. Treatments are aimed at decreasing the pressure through increasing the drainage of fluid from the eye or decreasing fluid production.
Coloboma is caused by incomplete closure of the choroid fissure. There are varying degrees, and usually only a cleft in the iris is left, which tends not to affect vision. The cleft can affect the eyelid, ciliary body, retina, choroid, lens or even the optic nerve, which would affect vision and can cause blindness in the most severe cases. There is currently no treatment.
Albinism affects pigmentation in the skin, hair, iris and retina,
and is diagnosed from an eye examination. The lack of pigment in the iris and retina can lead to numerous eye conditions including macular hypoplasia, optic nerve ystagmus, light sensitivity and overall poor vision.