Antenatal Screening
Introduction
Modern antenatal care is based on the assessment of risk and identification of the most appropriate care pathway for a pregnant woman. Obstetric ultrasound is a routine tool in antenatal screening for detecting foetal anomalies. Low risk women are offered ultrasound screening in the first and second trimesters, and as these are anomaly scans appropriate care and counselling should be immediately available.
Primary care practitioners will refer a pregnant woman to ante- natal care and aim for a first appointment with ultrasound scanning at approximately 10 weeks into the pregnancy from the date of the last menstrual period (8 weeks after fertilisation). A full obstetric history should be taken and it is good practice to take full gynaecological and medical histories. At the booking appointment the midwife will initiate a close relationship with the mother, and for primigravida women this is the opportunity to discuss the effects of early pregnancy and non‐specific symptoms. Tiredness, nausea and vomiting may be worrying, but hyperemesis gravidarum (excessive nausea and vomiting) should be identified and treated. The mother will be weighed at this meeting, but normally weight is not monitored throughout pregnancy. 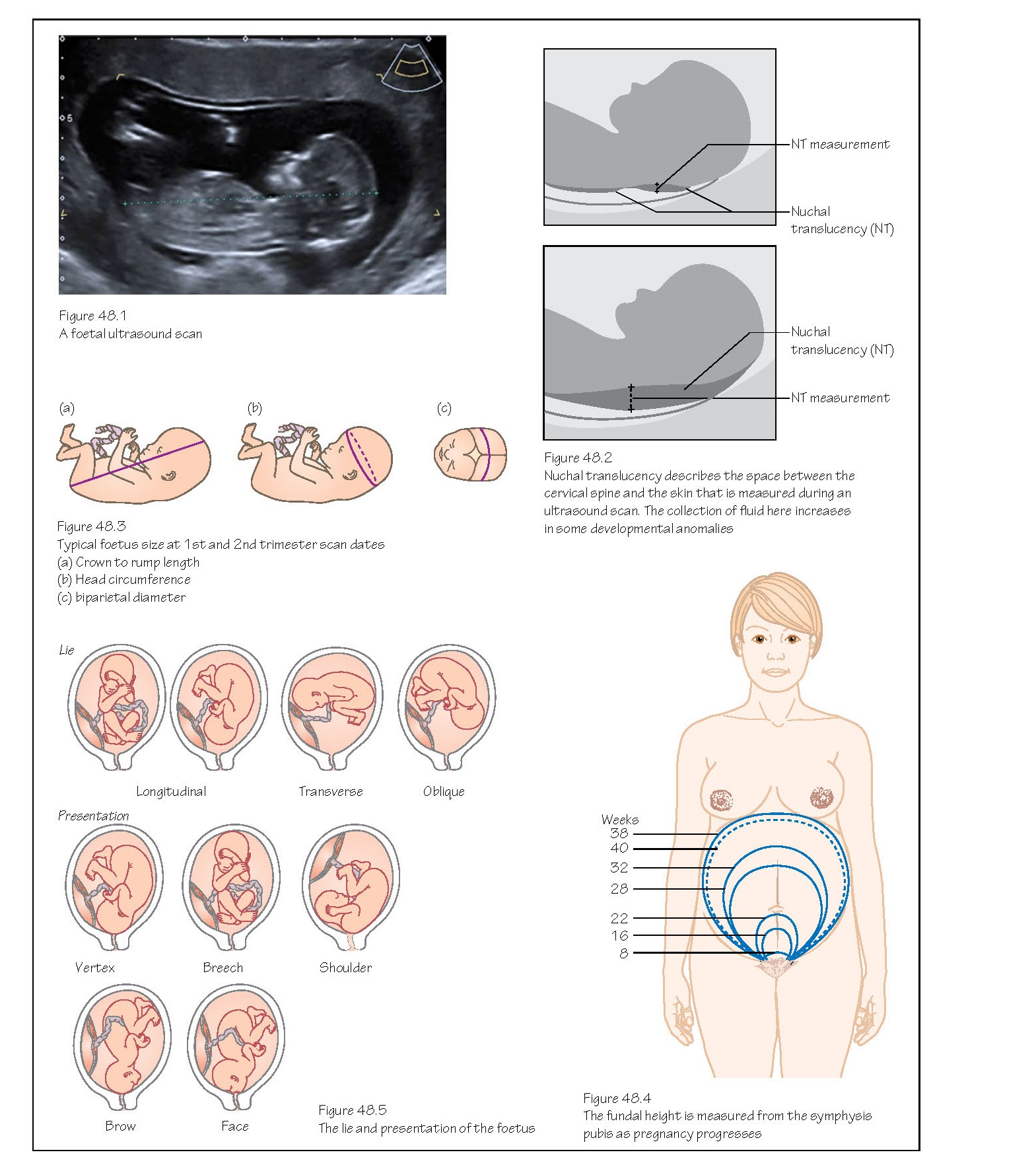 The first scan
The first‐trimester ultrasound scan, sometimes referred to as the ‘dating scan’, is performed at a minimum of 10 weeks’ gestation and usually before 14 weeks. Scanning at this stage will confirm foetal viability, give gestational dating information, identify multiple pregnancy, define chorionicity (see Chapter 11) and look for indicators of anomalous development (Figure 48.1). These indicators include nuchal translucency, abdominal wall defects (see Chapter 35) and brain anomalies (see Chapter 44). Nuchal translucency screening is not reliable in smaller foetuses and other anomalies may also be missed. Nuchal translucency measures the thickness of fluid between the cervical spine and skin, and is associated with a number of chromosomal anomalies such as Down syndrome, Turner syndrome, trisomy 18 and trisomy 13, and with cardiac anomalies (Figure 48.2). Skeletal dysplasias may be detectable by ultrasound in the first trimester, and in the near future cardiac defects may be screened for as the resolution of ultrasound scanning improves.
The most reliable way to ‘date’ the embryo at this stage is by measuring the foetal crown‐to‐rump length (CRL). If the first ultrasound scan is not performed until later in pregnancy, the biparietal diameter and head circumference will provide a more accurate indication of gestational timescale. If the dating scan is not performed until the third trimester, a measurement of the femur together with either the biparietal diameter or head circumference will increase dating accuracy (Figure 48.3).
Based on a number of criteria a mother is assessed as being either ‘low risk’, with a high probability of a straightforward delivery and a healthy baby, or as a mother who will need a higher level of antenatal care. In either case after assessment a ‘low risk’ mother’s care parameters may change depending upon her health and symptoms that may develop later in gestation.
Basic antenatal tests are performed from first contact and confirmation of pregnancy at 8–12 weeks to book the mother into the antenatal care system with the first ultrasound dating scan, followed by a care appointment at 16 weeks and a second ultrasound scan at around 20 weeks. Urine is periodically tested for albumin, glucose, ketones and infection. Blood measurements taken at the first antenatal appointment act as baselines to measure changes (i.e. anaemia) during pregnancy. Blood pressure is monitored. Blood samples are taken to assess blood type and Rhesus disease (see Chapter 13).

High‐risk pregnancy
In pregnancies with a higher risk of anomalies or with indications of anomalies, further tests may be offered. The quadruple blood test can be performed in the second trimester between 15 and 18 weeks; this tests for maternal levels of alpha‐fetoprotein (AFP), human chorionic gonadotropin (hCG), unconjugated estriol (uE3) and inhibin A. In combination with factors taken from the mother’s history the results of this test may be used to create an indication of the probability of the foetus having Down syndrome. A combined test that describes the association of the nuchal translucency value of the foetus with maternal blood levels of free beta‐hCG and pregnancy‐associated plasma protein‐A (PAPP‐A) at the time of the first‐trimester scan performs the same function. The quadruple test is used if the mother would like to determine the risk of anomalous development but is unable to use the combined test. Invasive testing, such as chorionic villus sampling, amniocentesis and cordocentesis, may be offered in cases that indicate the need for further diagnostic testing. These methods have risks associated with miscarriage but provide early diagnosis that can aid early termination decisions.

The second scan
The second‐trimester ultrasound scan, sometimes called the ‘anomaly scan’ is offered at 18–21 weeks. At this stage the foetus is at a size and development stage that can be examined in enough detail to identify most anomalous development. The sonographer will proceed through a checklist of anatomical structures to examine including the skull, central nervous system, heart, thorax, gastrointestinal tract, urogenital systems and the skeleton. The location of the placenta will be determined and the volume of amniotic fluid recorded.
Antenatal appointments for low risk pregnancies will continue at 25 weeks, then every 3 weeks assessing growth by fundus height (Figure 48.4) until 34 weeks and then every 2 weeks until 40 weeks by which point birth would be expected. In the later stages of pregnancy the assessment of the lie and presentation of the foetus (Figure 48.5) becomes more important. After 41 weeks’ gestation team will discuss the induction of labour or an lective caesarean section with the mother.