RENAL HANDLING OF POTASSIUM
Potassium is a primarily intracellular ion, with skeletal muscle alone containing more than 75% of the body’s total load. Less than 2% of this load is found in the extracellular ﬂuid. The normal plasma concentration is between 3.5 and 5.0 mmol/L.
Extracellular potassium is freely ﬁltered at the glomerulus. A large fraction of the ﬁltered load is consistently reabsorbed along the proximal tubule (66%) and loop of Henle (25%). In the distal tubule, however, there is a variable degree of reabsorption or secretion that depends on input from homeostatic feedback mechanisms. In this manner, the kidneys make a crucial contribution to plasma potassium concentration. 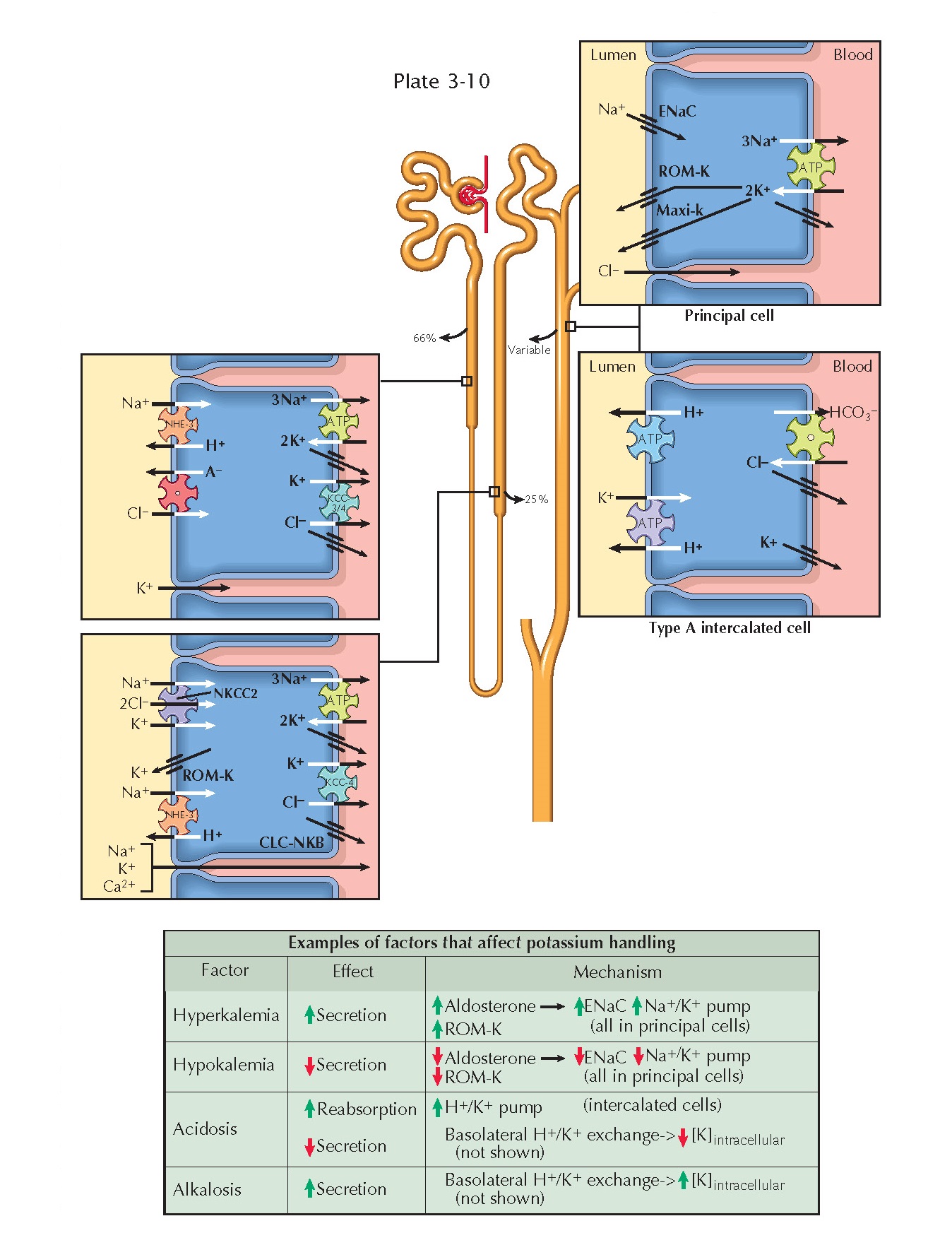 Transport Mechanisms
Proximal Tubule. In the proximal tubule, potassium is reabsorbed along a paracellular route. A chemical gradient is established as the reabsorption of sodium and water concentrates potassium in the tubular ﬂuid. An electrical gradient is established as chloride is reabsorbed, which leaves a positive charge in the late part of the proximal tubule. There is some evidence that potassium also undergoes some transcellular reabsorption in this segment, but the details and relative importance of this pathway remain unknown.
Thick Ascending Limb. In the thick ascending limb, potassium undergoes transcellular reabsorption by crossing the apical membrane on the Na+/K+/2Cl- cotransporter (NKCC2), then crossing the basolateral plasma membrane via KCC4 K+/Cl- symporters and potassium channels. A subset of the potassium that enters the cells, however, is recycled back into the lumen through ROM-K channels. Such recycling creates a positive charge in the lumen that drives the paracellular reabsorption of potassium, sodium, and other cations.
Distal Nephron. Potassium handling is more variable from the distal convoluted tubule onward, with overall excretion rates depending on the net balance of secretion and reabsorption.
Secretion occurs primarily in the connecting tubule and cortical collecting duct. When sodium enters principal cells through apical ENaC channels, a negative charge is left in the tubular lumen. An electrical gradient thus established, potassium that has been brought into principal cells on basolateral Na+/K+ ATPases ﬂows into the lumen through apical ROM-K and maxi-K (also known as BK) channels. K+ channels are also present in the basolateral compartment, as they are elsewhere in the nephron, to permit continuous operation of Na+/K+ ATPases.
Reabsorption occurs primarily in the outer medullary collecting duct. Type A intercalated cells possess apical H+/K+ antiport ATPases, which bring potassium into cells, and basolateral K+ channels, which allow it to enter the interstitium.