HOMOLOGUES OF THE INTERNAL GENITALIA


HOMOLOGUES OF THE INTERNAL GENITALIA 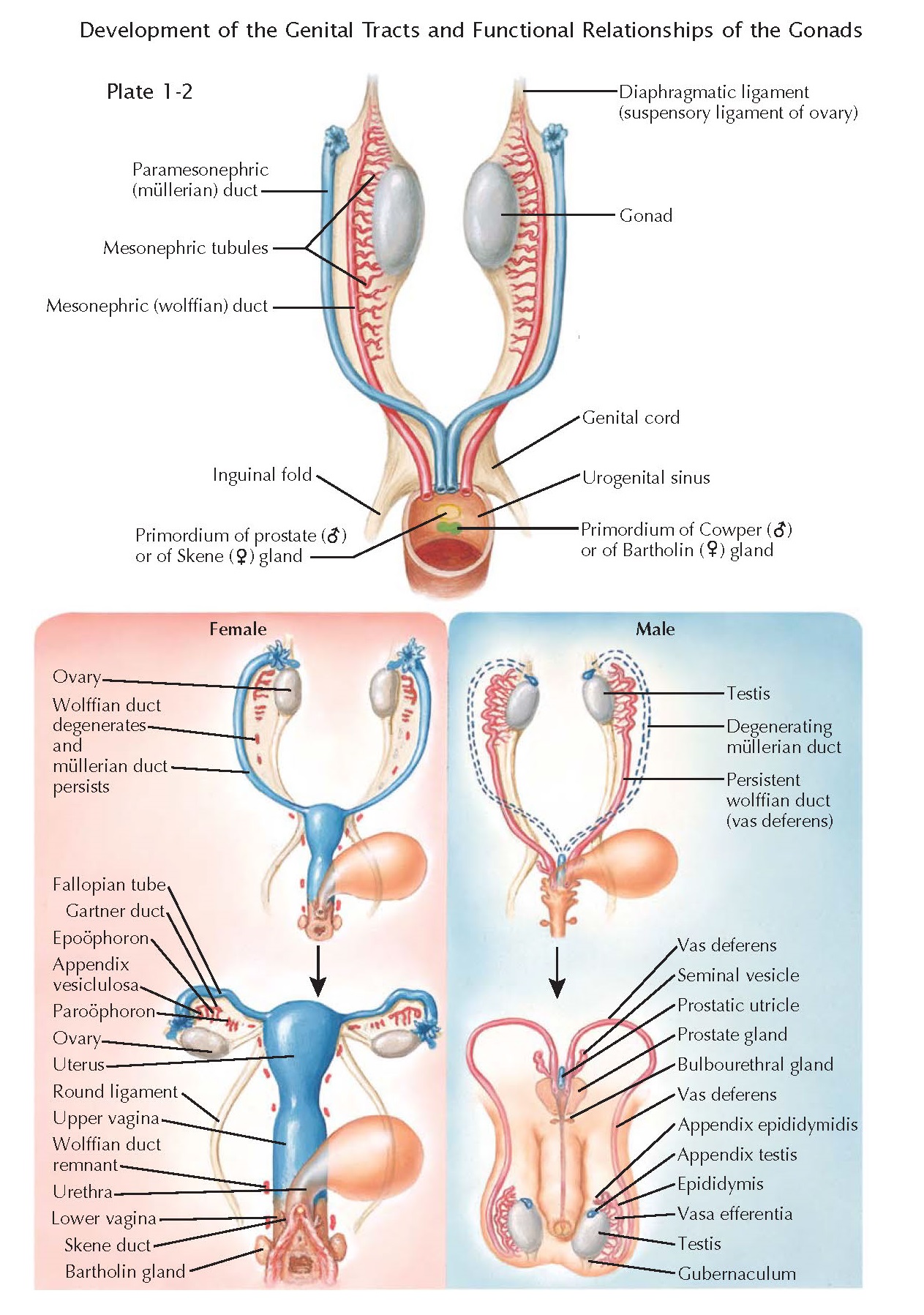 Although sex is determined at the time of fertilization, phenotypic gender is determined by a complex tissue differentiation process that begins in the medial genital thickening or ridges on the posterior surface of the embryonic body cavity. During the 5th fetal week, primordial germ cells migrate from the yolk sac to the posterior body wall and induce the formation of genital ridges on either side of the midline. Here, these migrating cells induce the formation of undifferentiated primitive sex cords.

Signaled by the arrival of primordial germ cells, two sets of paired genital ducts, the mesonephric or nephric (wolfﬁan) ducts and the paramesonephric (müllerian) ducts also develop. The mesonephros is a prominent excretory structure that consists of a series of mesonephric tubules that connect with the elongating mesonephric (wolfﬁan) ducts as the latter extend caudally until they terminate in the urogenital sinus on each side of the midline. The paramesonephric ducts develop lateral to each of the mesonephric ducts and are derived from the evagination of the coelomic epithelium. The cephalad ends open directly into the peritoneal cavity, whereas the distal ends grow caudally, fuse in the lower midline, form the uterovaginal primordium, and join the urogenital sinus as an elevation, the müllerian tubercle, which separates the urogenital area from the more posterior gut.
Under the inﬂuence of the SRY gene in the male primitive sex cord, the mesonephric (wolfﬁan) ducts are maintained during development. As the developing male Sertoli cells begin to differentiate in response to SRY, they secrete a glycoprotein hormone, müllerianinhibiting substance (MIS) or anti-müllerian hormone (AMH) that causes the paramesonephric (müllerian) ducts to regress rapidly between the 8th and 10th fetal weeks. Müllerian duct remnants in the male include the appendix testis and the prostatic utricle. In females, MIS is not present, so müllerian ducts remain, and the mesonephric tubules and ducts degenerate in the absence of androgens, often resulting in remnant epoöphoron and paroöphoron cystic structures within the ovarian mesentery and Gartner duct cysts within the anterolateral vaginal wall. These structures are clinically important because they may develop into sizable and symptomatic cysts (see Plates 8-13 and 9-13).
In the male, under the inﬂuence of testosterone secreted by Leydig cells at 9 to 10 weeks, the majority of the mesonephric ducts develop into the vas deferens and body (corpus) and tail (cauda) of the epididymis. The mesonephric tubules nearest to presumptive testis form the globus major or caput of the epididymis and the efferent ductules that connect to the testis, forming ducts to transport sperm. The more cranial mesonephric tubules develop into the vestigial appendix epididymis, and the more caudal tubules may develop into remnants called paradidymis. The seminal vesicles sprout from the distal ends of the mesonephric ducts, whereas the prostate and bulbourethral glands develop from the urogenital sinus, thus revealing different embryologic origins. In the fully developed male embryo, the distal oriﬁce of the mesonephric duct (ejaculatory duct) terminates in the verumontanum on the ﬂoor of the prostatic urethra.
During the 10th week of gestation in females, in the absence of MIS and androgens, the primordial müllerian ducts remain separate and form the fallopian tubes superiorly. At their caudal ends, the ducts join, fuse, and form a common channel called the uterovaginal canal, which later develops into the uterus and proximal four-ﬁfths of the vagina. The remainder of the distal vagina forms from paired thickenings on the posterior urogenital sinus called sinovaginal bulbs and the vaginal plate, whose origin is not clear.
Intersex disorders can result from failure of the müllerian or wolfﬁan ducts to regress completely. An example of this is hernia uteri inguinale or persistent müllerian duct syndrome, in which MIS deﬁciency or receptor abnormalities cause persistence of müllerian duct structures in an otherwise phenotypically normal male. This is commonly diagnosed during exploration for an infant hernia or undescended testicle because the müllerian structures can tether the testis in the abdomen and restrict normal scrotal descent. Vestigial remnants of the wolfﬁan duct can also exist in fully developed females. Vestiges of the male prostate may appear as periurethral ducts in the female (see Plate 7-5). In addition, homologues of male Cowper glands are the major vestibular glands (Bartholin glands) in the female (see Plate 6-16).