pediagenosis    April 30, 2020    AnatomyPhysiology , LowerLimb
Anterior and Lateral Compartments of the Leg and Dorsum of the Foot Anatomy
Anterior compartment of leg and dorsum of foot
The anterior compartment of the leg contains muscles that extend the ankle joint and toes and evert and invert the foot. Its neurovascular bundle comprises the anterior tibial artery and its venae comitantes and the deep fibular nerve (Fig. 6.57). The cutaneous branches of the superficial fibular nerve are also present.


On the dorsum of the foot are the long extensor tendons, the dorsalis pedis artery, the dorsal venous arch and, more laterally, the bellies of extensor digitorum brevis and extensor hallucis brevis. The medial and lateral malleoli lie on each side of the ankle. 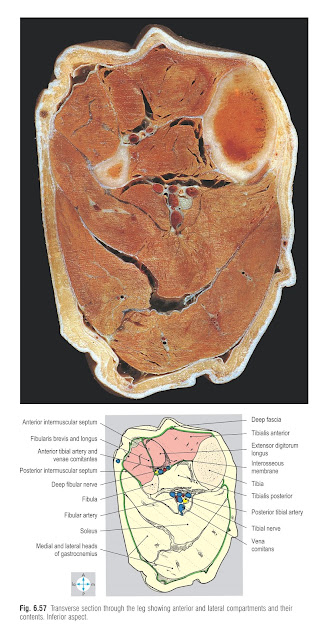 Superficial structures
The dorsal venous arch (Fig. 6.58) drains blood from the toes and sole of the foot. From its medial end the great (long) saphenous vein passes in front of the medial malleolus where it is palpable and accessible, and then ascends to the posteromedial aspect of the knee. From the lateral side of the arch, the small saphenous vein passes behind the lateral malleolus and ascends to the popliteal fossa (p. 274). The saphenous nerve accompanies the great saphenous vein (Fig. 6.59), supplying skin on the medial side of the leg and medial border of the foot as far as the ball (meta­tarsophalangeal joint) of the great toe. The sural nerve accompanies the small saphenous vein (Fig. 6.58) and supplies skin along the lateral border of the foot and little toe.
The superficial fibular (superficial peroneal) nerve enters the anterior compartment of the leg from the lateral (fibular or peroneal) compartment at the anterior border of fibularis longus (Fig. 6.60). Shortly after piercing the deep fascia it divides into medial and lateral branches, which supply the skin of the leg and dorsum of the foot (Fig. 6.58). On reaching the toes, the medial branch supplies the medial side of the great toe and the contiguous aspects of the second and third toes, while the lateral branch innervates the adjacent sides of the third, fourth and fifth toes. Thus, all of the digital skin is innervated by the superficial fibular nerve, except for the cleft between the great and second toes (supplied by the deep fibular [peroneal] nerve; Fig. 6.58) and the lateral aspect of the little toe (supplied by the sural nerve).
The skin and subcutaneous tissues over the anteromedial surface of the tibia are comparatively thin and have a sparse blood supply.  As a consequence, lacerations in this region may heal relatively slowly. The subcutaneous tissues of the ankle are a common site for accumulation of tissue fluid (oedema). 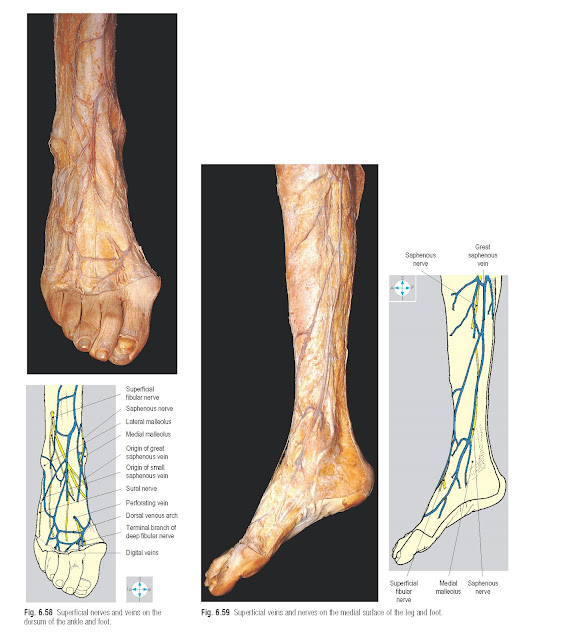 Deep fascia
In the region of the ankle and foot there are thickenings of the investing deep fascia forming retinacula (Fig. 6.60), which prevent bowstringing of the long extensor tendons during muscular contraction. As the tendons pass beneath the retinacula to reach the foot they are enveloped in synovial membrane. By convention, superior and inferior extensor retinacula are described (Fig. 6.64). The superior retinaculum forms a broad band passing between the anterior borders of the tibia and fibula. The inferior retinaculum is Y­shaped, with its stem attached to the upper surface of the calcaneus. 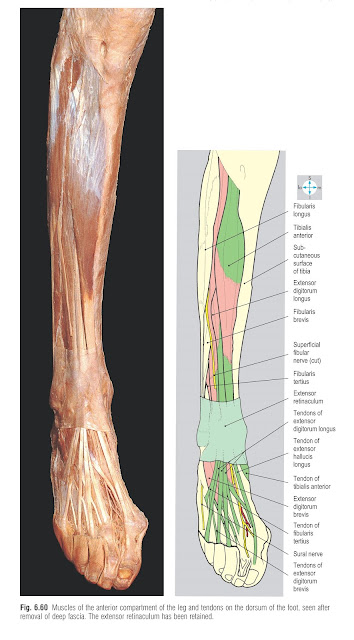 Muscles
The muscles in the anterior compartment are tibialis anterior, extensor hallucis longus, extensor digitorum longus and fibularis (peroneus) tertius. All are sup­ plied by the deep fibular nerve. Tibialis anterior is the most medial (Figs 6.57 & 6.60), attaching to the lateral condyle and anterolateral surface of the shaft of the tibia, the adjacent interosseous membrane and the deep fascia overlying the muscle.
Distally, its tendon crosses the anterior border of the lower end of the tibia and attaches to the base of the first metatarsal and adjacent part of the first cuneiform bone (Fig. 6.61). The muscle inverts the foot and dorsiflexes the ankle joint.
The other three muscles all attach to the narrow anterior surface of the fibula and adjacent interosseous membrane. Extensor digitorum longus (Fig. 6.57) is attached to the proximal three­quarters of the bone, fibularis tertius (when present) to the distal quarter, and extensor hallucis longus is overlapped by them medially at midshaft level. In addition, extensor digitorum longus attaches to the anterior intermuscular septum and overlying deep fascia.
The proximal part of extensor hallucis longus is overlapped by adjacent muscles, but in the lower part of the leg, its tendon emerges lateral to that of tibialis anterior. As it descends towards the ankle, the tendon crosses from the lateral to the medial side of the neurovascular bundle.
In the foot, the tendon of extensor hallucis longus runs forwards to the great toe (Fig. 6.62), where it attaches to the base of the distal phalanx. It is a powerful extensor of the toe, dorsiflexor (extensor) of the foot and assists inversion. Lateral to extensor hallucis longus, the muscle belly of extensor digitorum longus gives way distally to four tendons, which pass to the dorsal aspects of the lateral four toes. Each tendon forms an extensor expansion that divides into three slips. The central slip attaches to the base of the middle phalanx, while the two lateral slips combine to insert into the base of the distal phalanx (Fig. 6.62). Extensor digitorum longus extends the lateral four toes and dorsiflexes the foot. Fibularis tertius is a continuation of the belly of extensor digitorum longus. It attaches to the lateral border of the fifth metatarsal (Fig. 6.62) and everts the foot and dorsiflexes the ankle.
The muscles of the anterior compartment of the leg are active during walking in both the supporting and swing phases. In the weight­bearing limb they help to incline the leg forwards, while the foot remains stationary on the ground. In the swinging limb, the muscles maintain the ankle in dorsiflexion, thereby preventing the foot from dropping.
On the dorsum of the foot, extensor digitorum brevis and extensor hallucis brevis (Fig. 6.62) are attached to the upper surface of the calcaneus and overlying stem of the inferior extensor retinaculum. Extensor digitorum brevis gives rise to three short tendons, which pass deep to the long extensor tendons of the lateral three toes (Fig. 6.62) and attach to the dorsal extensor expansions of the second, third and fourth toes. The tendon of extensor hallucis brevis attaches to the base of the proximal phalanx of the great toe. The muscles assist extension of the toes, particularly when the long extensors are flexing the leg forwards on the foot just before it is lifted from the ground during walking. The nerve supply is the deep fibular nerve. 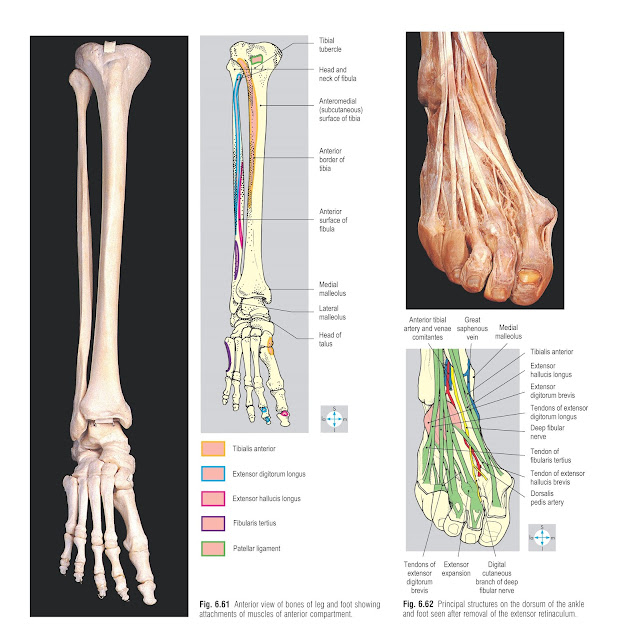 Neurovascular bundle
This comprises the deep fibular nerve and the anterior tibial artery, with its venae comitantes (Fig. 6.57). The artery, a terminal branch of the popliteal artery (p. 278), reaches the anterior compartment after passing through the interosseous membrane (Figs 6.76 & 6.83). It then descends on the anterior surface of the membrane (Fig. 6.63) and at the ankle lies midway between the two malleoli. It continues distally as the dorsalis pedis artery on the lateral side of the extensor hallucis longus tendon (Fig. 6.62), where its pulsations are palpable in the living foot.
At the proximal end of the first inter­ metatarsal space, the dorsalis pedis artery gives a deep branch that passes between the two heads of the first dorsal interosseous muscle to join the plantar arch (p. 285). This arrangement provides an anastomosis between the anterior and posterior tibial arteries. The dorsalis pedis artery terminates as the first dorsal meta­ tarsal artery, supplying the great toe and adjacent border of the second toe and the arcuate artery. It turns laterally beneath the extensor tendons across the bases of the metatarsals and gives metatarsal arteries, which divide to supply adjacent borders of the remaining three digits.
The deep fibular (peroneal) nerve, a terminal branch of the common fibular nerve, winds around the neck of the fibula deep to fibularis (peroneus) longus (Fig. 6.63). The nerve accompanies the anterior tibial vessels into the foot and supplies all muscles in the anterior compartment. In the foot, the nerve is close to the dorsalis pedis artery, usually lying lateral to the artery but sometimes medial to it (Fig. 6.62). It gives a branch to extensors digitorum and hallucis brevis and the tarsal joints and terminates by supplying the skin between the great and second toes (Fig. 6.62). 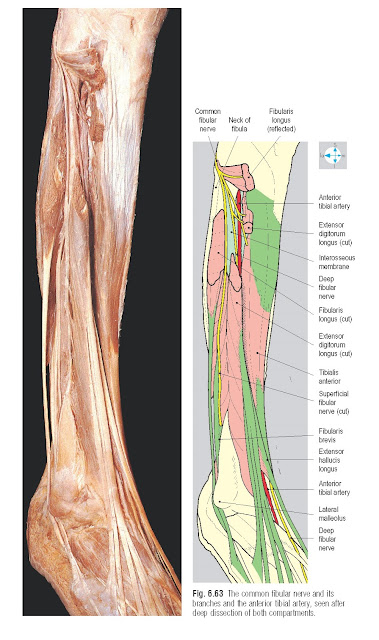 Lateral compartment of leg
The lateral (fibular or peroneal) compartment of the leg extends from the head of the fibula above to the lateral malleolus below. Its principal contents are the fibularis longus and brevis muscles (Fig. 6.64). Fibularis (peroneus) longus is attached to the upper two­thirds of the lateral surface of the fibula and fibularis (peroneus) brevis to the lower two­thirds, with brevis being the more anterior. Both muscles are attached to the two crural intermuscular septa and the overlying deep fascia (Fig. 6.57). On reaching the ankle the tendons pass behind and then below the lateral malleolus, restrained by the superior and inferior fibular retinacula and sur­rounded by synovial membrane (Fig. 6.64). The tendon of fibularis brevis passes for­ wards above the fibular trochlea of the calcaneus to attach to the base of the fifth metatarsal. The fibularis longus tendon passes forwards below the fibular trochlea and turns medially into the sole of the foot where it lies in a groove on the cuboid bone (Fig. 6.65). It attaches to the lateral side of the base of the first metatarsal and the adjacent first cuneiform.
Fibularis longus and brevis are evertors of the foot and weak plantar flexors of the ankle joint. Their nerve supply is the superficial fibular nerve, a terminal branch of the common fibular nerve, which enters the lateral compartment by winding around the neck of the fibula. Here it is palpable and may sometimes be compressed. 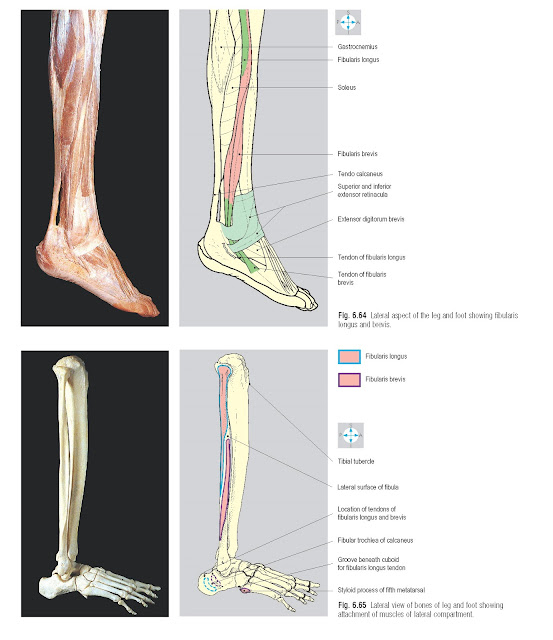 Branches of the fibular artery, which arises from the posterior tibial artery (p. 278), pierce the posterior intermuscular septum to supply fibularis longus and brevis