ANATOMY AND RELATIONSHIPS OF THE PITUITARY GLAND


ANATOMY AND RELATIONSHIPS OF THE PITUITARY GLAND
The pituitary gland is reddish gray and ovoid, measuring about 12 mm transversely, 8 mm in its anterior-posterior diameter, and 6 mm in its vertical dimension. It weighs approximately 500 mg in men and 600 mg in women. It is contiguous with the end of the infundibulum and is situated in the hypophysial fossa of the sphenoid bone. A circular fold of dura mater, the diaphragma sellae, forms the roof of this fossa. In turn, the ﬂoor of the hypophysial fossa forms part of the roof of the sphenoid sinus. The diaphragma sellae is pierced by a small central aperture through which the pituitary stalk passes, and it separates the anterior part of the upper surface of the gland from the optic chiasm. The hypophysis is bound on each side by the cavernous sinuses and the structures that they contain. Inferiorly, it is separated from the ﬂoor of the fossa by a large, partially vacuolated venous sinus, which communicates freely with the circular sinus. The meninges blend with the capsule of the gland and cannot be identiﬁed as separate layers of the fossa. However, the subarachnoid space often extends a variable distance into the sella, particularly anteriorly, and may be referred to as a “partially empty sella” when seen on magnetic resonance imaging (MRI) (see Plate 1-12). In some cases of subarachnoid hemorrhage, the dorsal third of the gland may be covered with blood that has extended down into this space. 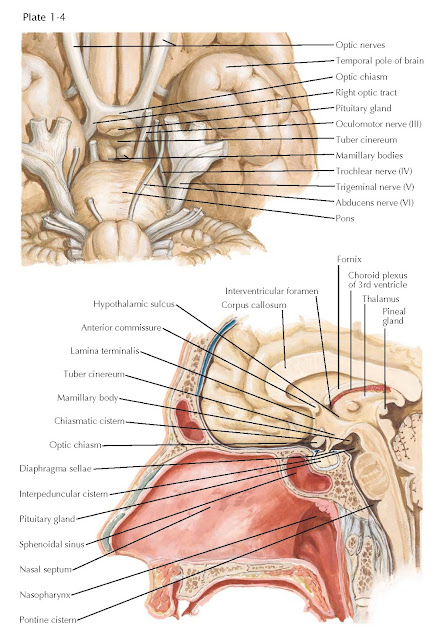 The hypothalamus is an important relation of the pituitary gland, both anatomically and functionally. This designation refers to the structures contained in the anterior part of the ﬂoor of the third ventricle and to those comprising the lateral wall of the third ventricle below and in front of the hypothalamic sulcus. The mamillary bodies are two round, white, pea-sized masses located side by side below the gray matter of the ﬂoor of the third ventricle in front of the posterior perforated substance. They form the posterior limits of the hypothalamus. At certain sites at the base of the brain, the arachnoid is separated from the pia mater by wide intervals that communicate freely with one another; these are called subarachnoid cisterns. As the arachnoid extends across between the two temporal lobes, it is separated from the cerebral peduncles by the interpeduncular cistern. Anteriorly, this space is continued in front of the optic chiasm as the chiasmatic cistern. Space-occupying lesions distort these cisterns. The optic chiasm is an extremely important superior relation of the pituitary gland. It is a ﬂat, somewhat quadrilateral bundle of optic nerve ﬁbers situated at the junction of the anterior wall of the third ventricle with its ﬂoor. Its anterolateral angles are contiguous with the optic nerves, and its posterolateral angles are contiguous with the optic tracts. The lamina terminalis, which represents the cephalic end of the primitive neural tube, forms a thin layer of gray matter stretching from the upper surface of the chiasm to the rostrum of the corpus callosum. Inferiorly, the chiasm rests on the diaphragma sellae just behind the optic groove of the sphenoid bone. A small recess of the third ventricle, called the optic recess, passes downward and forward over its upper surface as far as the lamina terminalis. A more distant relationship is the pineal gland, which is a small, conical, reddish-gray body lying below the splenium of the corpus callosum. Rarely, ectopic pineal tissue occurs in the ﬂoor of the third ventricle and gives rise to tumors of that region. Compression of neighboring cranial nerves, other than the optic nerves, may occur if there is extensive cavernous sinus extension from a pituitary neoplasm (see Plate 1-24).