Self-poisoning is the most common toxicological problem: serious adverse effects are rare with good basic supportive management. The difficulty of performing human toxicological research means that the evidence base is very limited. Expert advice on the management of poisoning is available through a system of national poisons information centres. 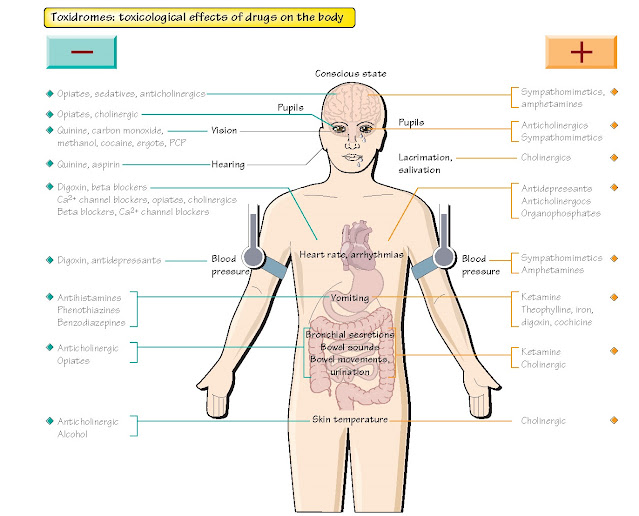 A straightforward, non-judgemental tone can help establish rapport. The details of the ingestion (e.g. drugs, alcohol, suicide note, social factors and precipitants) should be documented.

Airway Ensure the airway is open and protected, give oxygen if unwell.

Shock responds to intravenous fluid in most cases.

Arrhythmias may need antidotes before usual treatments are effective (Chapter 25).

Agitation can be a medical emergency, putting staff and patients at risk. A combination of physical restraint and chemical sedation may be required (Chapter 27).

Many toxic seizures are self-limiting. Benzodiazepines are first-line treatment; barbiturates are second-line. Phenytoin should not be used in seizures related to toxic ingestions as its mechanism of action (Na+ channel blockade) is the same as the cause of many such fits.

Exposure Check temperature, check for trauma or evidence of intravenous drug use (IVDU).

Any patient who is comatose or has major ABC derangement needs resuscitation first. Poisoning can be difficult to detect clinically: patients may be asymptomatic despite having taken a lethal dose.

It is easy to assume that all signs and symptoms are attributed to poisoning. Impaired consciousness may be due to a head injury.

Supportive care is the mainstay of management: ensuring the patient does not come to harm while the drugs are eliminated. Supportive care is a continuation of the principles of resuscitation above. The patient should be nursed in an environment close to a critical care area where close monitoring is possible. The observation unit of an Emergency Department is ideal.

Patients should be assessed early for their risk of coming to harm:

•    Risk of deterioration: patients who have taken particularly toxic drugs that may have delayed presentation, e.g. tricyclic antidepressants, beta blockers, digoxin. These patients should be observed in a high acuity area until the danger is passed.

•      Risk of absconding: patients who try to leave may be intoxicated, confused, attention-seeking, psychotic, seriously depressed and intent on finishing the job, or sometimes just bored. An assessment of their mental capacity is essential (Chapter 26), to allow detention of the patient against their wishes if necessary.

Systemic effects of drugs are minimised by:

Specific poisons and their treatments are discussed in Chapter 25.

Charcoal is ‘activated’ by superheating, increasing its surface area to volume ratio to 900m2/g, i.e. the area of a tennis court per gram. Activated charcoal adsorbs drugs, minimising gut absorption. Charcoal also adsorbs drugs excreted in the bile, some of which would normally be reabsorbed by the body: the enterohepatic circulation.

Charcoal appears helpful if given soon after ingestion, ideally within one hour. It should be given only if:

Charcoal is not helpful in poisoning due to alcohols (ethanol, methanol, ethylene glycol), hydrocarbons, alkalis, acids or metals.

Gastric washout is rarely performed, as it is unlikely to offer benefit over charcoal, and carries the risk of aspiration. Washout is appropriate in a patient presenting within a few hours of ingestion of a highly toxic overdose who has already been intubated. Charcoal can be instilled after the washout. Ipecac is a plant extract that causes vomiting; it is rarely used, as it can cause serious GI side effects.

Whole bowel irrigation is performed by infusing a clear inert solution (polyethylene glycol) orally until no drug residue is passed. It is useful for slow-release preparations not adsorbed by charcoal, e.g. iron, lithium. It requires close nursing supervision and is messy and so is usually performed in the intensive care unit (ICU).

Urinary alkalinisation enhances excretion of weak acids such as aspirin. Forced diuresis with large fluid volumes is dangerous as circulatory overload can occur.

Haemodialysis is used in severe poisoning by drugs that cannot be removed by other means, e.g. aspirin, lithium.

Related Posts
Medicine
Home
Give us your opinion