Originally, the term atypical was used to describe the nonclassic clinical features of infection with certain organisms, but today the term has been retained to refer to a group of organisms that includes Mycoplasma pneumoniae, Chlamydophila pneumoniae, and Legionella spp. These organisms cannot be reliably eradicated bylactam therapy (penicillins and cephalosporins) but must be treated with a macrolide, tetracycline, or quinolone. The frequency of these organisms as com- munity-acquired pneumonia (CAP) pathogens has varied in studies, but they may be present in up to 60% of CAP episodes because they can serve as copathogens, along with bacteria, in up to 40% of patients. When mixed infection is present, particularly with C. pneumoniae and pneumococcus, it may lead to a more complex course than if a single pathogen is present. In patients with more severe forms of CAP, atypical pathogens can be present in almost 25% of all patients, but the responsible organism may vary over time. Although atypical pathogens have been thought to be most common in young and healthy individuals, some population data have shown that they are present in patients of all ages, including elderly people and those in nursing homes.

Studies reporting a high frequency of atypical pathogens have made the diagnosis with serologic testing, which may not be as accurate and speciﬁc as culture and antigen identiﬁcation. The importance of atypical pathogens has also been suggested by a number of studies of inpatients, including those with bacteremic pneumococcal pneumonia, showing a mortality beneﬁt from therapies that include a macrolide or quinolone, agents that would be active against these organisms. 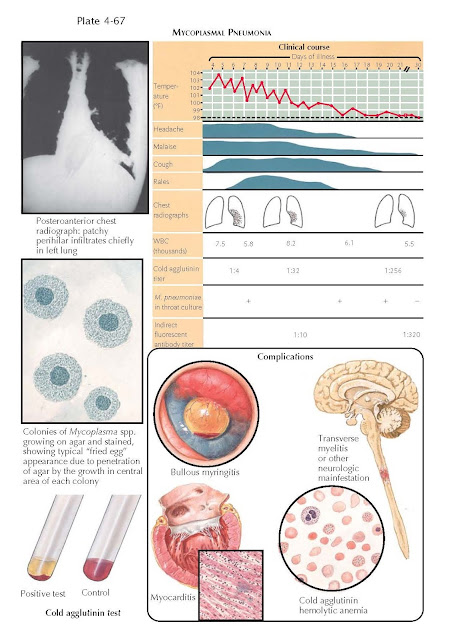 M. pneumoniae is an organism that closely resembles a bacterium, lacks a cell wall, and is surrounded by a three-layered membrane (see Plate 4-67).

Most of the respiratory infections caused by M. pneumoniae are minor and in the form of upper respiratory tract illness or bronchitis. Although pneumonia occurs in only 3% to 10% of all Mycoplasma infections, this organism is still a common cause of pneumonia, with a slight increase in frequency in the fall and winter. All age groups are affected, and although it is common in those younger than 20 years of age, it is also seen in older adults.

Respiratory infection occurs after the organism is inhaled and then binds via neuraminic acid receptors to the airway epithelium. An inﬂammatory response with neutrophils, lymphocytes, and macrophages then follows accompanied by the formation of IgM and then IgG antibody. Some of the observed pneumonitis may be mediated by the host response to the organism rather than by direct tissue injury by the organism. Up to 40% of infected individuals have circulating immune complexes.

When pneumonia is present, it is usually characterized by a dry cough, fever, chills, headache, and malaise after a 2- to 3-week incubation period. Chest radiographs show interstitial inﬁltrates, which are usually unilateral and in the lower lobe but can be bilateral and multilobar, although the patient usually does not appear as ill as suggested by the radiographic picture. Rarely, patients have a severe illness with respiratory failure or a necrotizing pneumonia, but most cases resolve in 7 to 10 days in an uncomplicated fashion. Many patients also have extrapulmonary manifestations such as upper respiratory tract symptoms (present in up to 50% of all affected), including sore throat and earache (with hemorrhagic or bullous myringitis). Pleural effusion is seen in at least 20% of patients, although it may be small. Other manifestations include neurologic illness such as meningoencephalitis, meningitis, transverse myelitis, and cranial nerve palsies. The most common extrapulmonary ﬁnding is an IgM autoantibody that is directed against the I antigen on the red blood cell and causes cold agglutination of the erythrocyte. Although up to 75% of patients may have this antibody and a positive Coombs test result, clinically signiﬁcant autoimmune hemolytic anemia is uncommon. Other systemic complications include myocarditis, pericarditis, hepatitis, gastroenteritis, erythema multiforme, arthralgias, pancreatitis, generalized lymphadenopathy, and glomerulonephritis. The extrapulmonary manifestations may follow the respiratory symptoms by as long as 3 weeks. Diagnosis is suspected by ﬁnding a compatible clinical picture and radiograph in a host with pneumonia and possibly extrapulmonary ﬁndings.  Conﬁrmation can be made by isolating the organism in culture from respiratory tract secretions. Serologic diagnosis is made by documenting a fourfold increase in speciﬁc antibody to M. pneumoniae by complement ﬁxation test, although a single titer of 1 : 64 is suggestive of infection. The diagnosis is also suggested by a cold agglutinin titer of 1 : 64. Testing for IgM antibody has also been used to deﬁne infection, and with this methodology, some investigators have found that M. pneumoniae can be a copathogen along with bacterial agents in patients with CAP. After the diagnosis has been made, therapy is given for 10 to 14 days with a macrolide, quinolone, or tetracycline, which can reduce the duration and severity of the illness. Radiographic resolution is generally rapid, similar to Chlamydophila spp., and more rapid than with Legionella spp. or pneumococcal pneumonia. 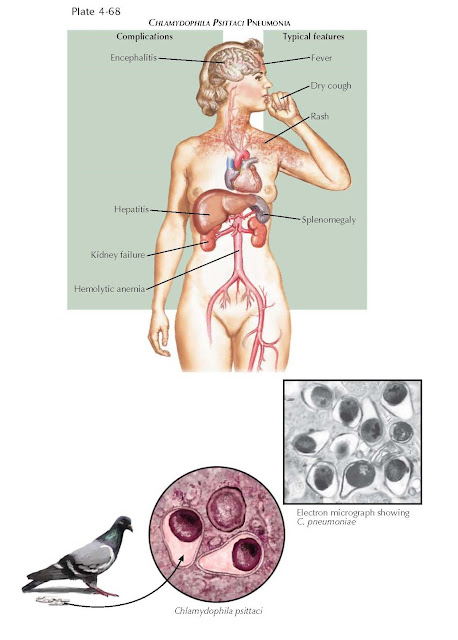 As already mentioned, C. pneumoniae can be found in patients of all ages with CAP, as either a primary or coinfecting pathogen and is relatively common (see Plate 4-68). Chlamydophila species can also cause a less common form of pneumonia, termed psittacosis, when a patient is infected by Chlamydophila psittaci, an agent transmitted by inhaling infected excrement from avian species; the infectious bird does not need to be ill to transmit disease.

Patients with psittacosis commonly have headache, high fever, splenomegaly and dry cough, all of insidious onset after a 1- to 2-week incubation period. A macular rash similar to that of typhoid fever may also be seen along with relative bradycardia. Other extrapulmonary ﬁndings may occur, including hepatitis, encephalitis, hemolytic anemia, and renal failure. Diagnosis is on the basis of a compatible contact history and can be conﬁrmed serologically. Treatment is with a tetracycline (2-3 g/d) for 14 to 21 days.

Although C. pneumoniae has been recognized as a common cause of CAP and may be a cause of sporadic pneumonia, it has also led to epidemics of respiratory infection, including pneumonia in patients residing in nursing homes. The disease has no speciﬁc features but is commonly seen with laryngitis and pharyngitis. Patients have fever, chills, pleuritic chest pain, headache, and cough and occasionally have respiratory failure. Therapy can be with tetracycline, the newer macrolides, or the ﬂuoroquinolones, but the duration of therapy is uncertain. However, this form of pneumonia tends to resolve more rapidly than other forms of CAP unless it is part of a mixed infection with pneumococcus. More than 85% of patients have complete radiographic resolution by 6 weeks and 100% by 12 weeks. 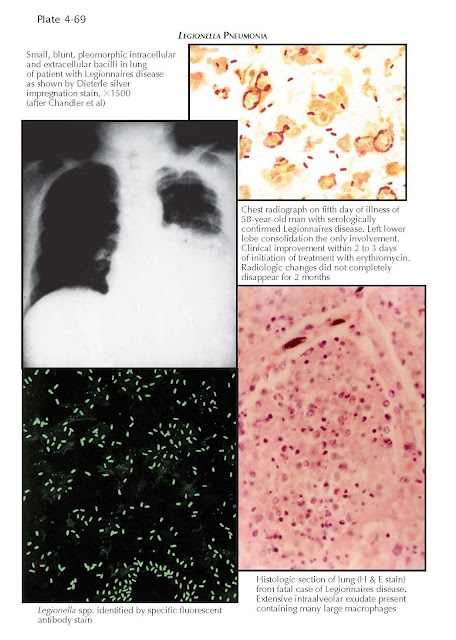 This small, weakly staining, gram-negative bacillus was ﬁrst characterized after an epidemic in Philadelphia in 1976, which infected primarily the attendees at an American Legion convention (see Plate 4-69). The pathogen is not really new, and after it was identiﬁed, evidence was obtained of infection involving this pathogen before 1976. Infection may occur either sporadically or in epidemic form, with the organism being transmitted via the aerosol route from an infected water source such as air conditioning equipment, drinking water, lakes and river banks, water faucets, saunas, and shower heads. Infection is more common in the summer and early fall. When a water system becomes infected in an institution, nosocomial outbreaks may occur, as has been the case in some nursing homes and hospitals.

After the organism enters the lungs, the incubation period is 2 to 10 days. Initially, the organism localizes intracellularly to the alveolar macrophage and multiplies, generating an inﬂammatory response that involves neutrophils, lymphocytes, and antibody. Because cell-mediated immunity is needed to contain infection, the disease may occur in compromised hosts, particularly hospitalized individuals who are receiving corticosteroids, and may relapse if not treated long enough.

At present, there are more than 46 species of Legionella and at least 68 serotypes, but serogroup 1 of Legionella pneumophila is the most commonly diagnosed, and it can be identiﬁed by a urinary antigen test. The other species that commonly causes human illness is Legionella micdadei. In its sporadic form, Legionella spp. may account for 7% to 15% of all cases of CAP, being a particular concern in patients with severe forms of illness.

The varying incidence of Legionella infection among admitted patients is a reﬂection of geographic and seasonal variability in infection rates, as well as the extent of diagnostic testing. For a serologic diagnosis, it is necessary to collect both acute and convalescent titers, and this can take at least 8 to 9 weeks. A diagnosis is made if the indirect ﬂuorescent antibody titer increases fourfold to a level of at least 1 : 64 or if a single convalescent titer is above 1 : 128; however, the latter ﬁnding is not always speciﬁc for acute infection. The organism can be recovered in culture of infected secretions grown on charcoal yeast extract agar, but this requires patients to produce sputum, and the results are positive in 10% to 80% of patients. Direct ﬂuorescent antibody staining for the organism in infected secretions is another method of diagnosis. Urinary antigen test is the single most accurate acute diagnostic test for Legionella spp. but is speciﬁc to serogroup 1 infection only. In recent years, most cases have been diagnosed with urinary antigen, and with reliance on urinary antigen testing the case fatality rate of Legionella has fallen, possibly reﬂecting diagnosis of less severe illness than in the past. In the future, real-time polymerase chain reaction testing on respiratory secretions may become available.

Patients with Legionella pneumonia commonly have high fever, chills, headache, myalgias, and leukocytosis. Features that can suggest the diagnosis are the presence of pneumonia with preceding diarrhea and mental confusion, hyponatremia, relative bradycardia, and liver function abnormalities, but this classic Legionella syndrome is not usually present. Symptoms are rapidly progressive, and the patient may appear to be quite toxic. The patient may have purulent sputum, pleuritic chest pain, and dyspnea, but the sputum Gram stain generally shows inﬂammatory cells but no identiﬁable organisms. The chest radiograph is not speciﬁc and may show bronchopneumonia, unilateral or bilateral disease, lobar consolidation, or rounded densities with cavitation. Up to 15% have pleural effusion, but empyema is uncommon. Proteinuria is common, and some patients have developed glomerulonephritis and acute tubular necrosis. Myocarditis and cerebellar dysfunction have been reported as rare complications of Legionella pneumonia.

When the diagnosis is suspected, therapy should be with either a macrolide or quinolone, with recent reports showing excellent results with the use of levoﬂoxacin or moxiﬂoxacin. Macrolide therapy has generally been given for 14 to 21 days; quinolones have shown efﬁcacy with shorter durations of therapy. With effective therapy, the decline in fever may be slow, and high spikes in temperature may continue for 1 week after starting appropriate therapy. Radiographic resolution is much slower than for other forms of atypical pathogen pneumonia and nonbacteremic pneumococcal pneumonia. The mortality rate is less than 5% in normal hosts but may be as high as 25% in compromised hosts.