Streptococcus pneumoniae is the most common pathogen for community-acquired pneumonia (CAP) in all patient populations, including those without a cause recognized by routine diagnostic testing. The organism is a gram-positive, lancet-shaped diplococcus, of which there are 84 different serotypes, each with a distinct antigenic polysaccharide capsule. Eighty-ﬁve percent of all infections are caused by one of 23 serotypes, which are now included in a vaccine. Infection is most common in the winter and early spring, which may relate to the ﬁnding that up to 70% of patients have a preceding viral illness. Patients at risk include elderly individuals; people with asplenia, multiple myeloma, congestive heart failure, or alcoholism; after inﬂuenza; and patients with chronic lung disease. Individuals with HIV infection have pneumococcal pneumonia with bacteremia more commonly than those in healthy populations of the same age. 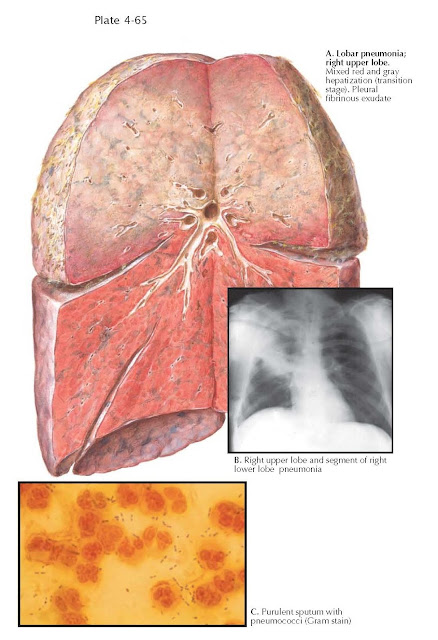 The organism spreads from person to person, and asymptomatic colonization of the oropharynx usually precedes the development of parenchymal lung invasion. Pneumonia develops when colonizing organisms are aspirated into a lung that is unable to contain the aspirated inoculum, often because of host defense impairment or because of acquisition of a particularly virulent strain, such as serotypes I and III. Virulence factors exist in the pneumococcus that facilitate its invasion in the lung; these include pneumococcal surface proteins A and C, which promote binding to airway epithelium and interfere with host defense against the bacteria, and pneumolysin, which can promote tissue invasion and interfere with ciliary beating.

The initial response to pneumococcal lung infection is extensive edema formation, which ﬁlls the lung and spreads the infection. At this phase, the lung looks grossly purple and is ﬁlled with frothy ﬂuid when sectioned. In the next few hours, ﬁbrin and neutrophils enter the alveolar space, and gradually over the next 24 to 48 hours, the bacteria move intracellularly as they are phagocytosed. The lung then becomes ﬁrmer and of a liverlike consistency, but with capillary congestion, and there are foci of hemorrhage that lead to a red color and a phase of “red hepatization.” As the blood clears over the next 2 or more days, a phase of “gray hepatization” follows. Generally, the lung returns to its normal appearance in 5 to 10 days, but in some instances, ﬁbroblasts enter the lobe, and organization and ﬁbrosis may occur. In most patients, the inﬂammation initially extends to the pleura and leads to a parapneumonic effusion, but some patients may develop infection of the pleural space, or empyema.

A previously healthy individual who develops pneumococcal pneumonia has symptoms of “typical pneumonia” with a sudden onset of high fever, shaking chills, pleuritic chest pain, leukocytosis with a left shift, and purulent (or even blood-tinged, “rusty” colored) sputum. Elderly patients with immune impairment, often caused by the presence of comorbid illness, may not have these classic symptoms and may only have malaise, dyspnea, confusion, and failure to thrive.

The classic radiographic pattern is a lobar consolidation, but bronchopneumonia may also occur. Bacteremia is present in up to 20% of hospitalized patients with this infection, but its presence probably does not lead to increased mortality, although it may be associated with delayed clinical resolution. Extrapulmonary complications, which may lead to a failure to respond to therapy, include meningitis, empyema (which is distinguished from a complicated or uncomplicated parapneumonic effusion by sampling of pleural ﬂuid), arthritis, endocarditis, and brain abscess. In the absence of any of these complications, patients usually show clinical improvement within 24 to 48 hours of the initiation of adequate antibiotic therapy.

The diagnosis of pneumococcal pneumonia can be conﬁrmed by positive blood culture results, but other diagnostic tests include sputum for Gram stain and culture and urinary antigen testing. The value of sputum Gram stain for establishing the diagnosis and for guiding therapy is controversial because the test is not always sensitive or speciﬁc, many patients cannot produce a good specimen for evaluation, and the yield of Gram stain is reduced if the patient has been on antibiotic therapy before sampling. When a sputum culture is obtained, it should be interpreted in conjunction with the ﬁndings of the Gram stain. Urinary antigen testing for pneumococcus is also commercially available.

Current recommendations are to treat for a minimum of 5 days, provided that the patient is afebrile for 48 to 72 hours and other clinical signs of pneumonia have resolved. Pneumococcal bacteremia may delay the clinical response but does not by itself necessitate prolonged therapy. In recent years, some investigators have measured serum levels of procalcitonin, an acute phase reactant synthesized by the liver in response to bacterial infection, and used serial levels to guide the duration of therapy. Penicillin is the drug of choice, but penicillin resistance has become increasingly common since the mid-1990s, with some level of resistance seen in more than 40% of these organisms in the United States and Europe. Many of these organisms are also resistant to other common antibiotics (macrolides, trimethoprim-sulfamethoxazole, selected cephalosporins, and even the quinolones). The clinical impact of resistance on outcomes such as mortality is uncertain but may lead to an increased risk of death. 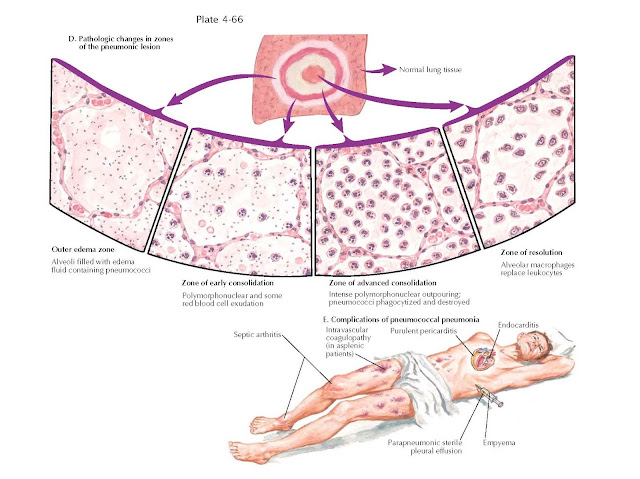 Pneumococcal capsular polysaccharide vaccine may prevent pneumococcal pneumonia and is recommended for those at risk, including those older than age 65 years, those residing in a nursing home or institution, those with splenic dysfunction (splenectomy, sickle cell disease), anyone with a chronic medical illness (e.g., heart or lung disease, diabetes), and those who are immunosuppressed (corticosteroid therapy, chemo-therapy). Adults should receive the 23-valent capsular polysaccharide vaccine (PPV), although children are given the 7-valent conjugate vaccine (PCV), which is more immunogenic.

The beneﬁts of the PPV have been conﬁrmed in immunocompetent patients older than age 65 years, and effectiveness has been estimated to be 75%, although it ranges from 65% to 84% in patients with chronic diseases, including diabetes mellitus, coronary artery disease, congestive heart failure, chronic pulmonary disease, and anatomic asplenia. Its effectiveness has not been as well established in immune-deﬁcient populations such as those with sickle cell disease, chronic renal failure, immunoglobulin deﬁciency, Hodgkin disease, lymphoma, leukemia, and multiple myeloma. A single revaccination is recommended in patients 65 years old or older who initially received the vaccine more than 5 years earlier and were younger than 65 years of age when ﬁrst vaccinated. If the initial vaccination was given at age 65 years or older, repeat is only indicated (after 5 years) if the patient has anatomic or functional asplenia or has one of the immune-compromising conditions listed above. Although the PCV is recommended for healthy children and has not yet been shown to be effective in adults, it has had beneﬁt for adults who live with vaccinated children, demonstrating a “herd immunity” effect. Recently, some children who have received the 7–valent PCV have developed infection with strains not included in the vaccine, leading to a higher frequency of severe necrotizing pneumonia, especially with serotype 3.